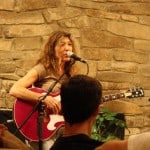 Food on Fridays yesterday was not labeled as part of the series "Scenes from Texas: Part Three," but in it, I mentioned some of the food consumed at Laity Lodge, so let's include it. Parts One and Two were on the humorous side, each including several scenes. Here is Part Four. Only one scene.Scene 8: Ashley ClevelandAshley Cleveland led us in worship at the Laity Lodge … END_OF_DOCUMENT_TOKEN_TO_BE_REPLACED