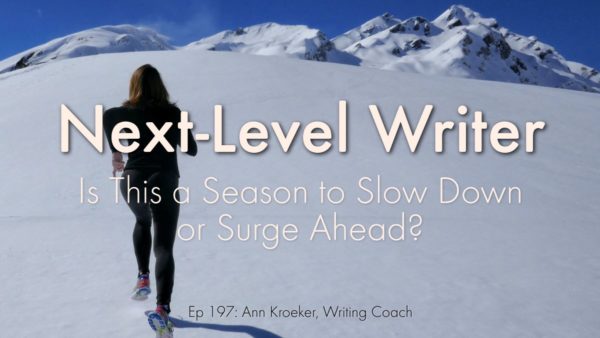 Every week I follow a pattern of sorts. Sometimes it gets thrown off by a day or two, but for my regular routine I write, record, prep, and publish content you may consume via the podcast, at the website, or in the newsletter that arrives in your inbox.

Every week I also produce social media updates, some of which are drawn from the primary content, as I pluck themes, quotes, and images and revise them slightly for the micro-form found on Instagram, Facebook, and Twitter.

Every week, I drip these out—drip-drip-drip—an ongoing effort to encourage writers in all the places I interact with them. It’s part of my writing routine, and while the output wouldn’t blow away any competitors, I’ve seen that the regularity has proven to be sustainable and fruitful.

Prepare to Surge Ahead and Get Lots Done

Last summer I was out of the country for a month, unable to drip out content on my usual schedule.

I could have just told everyone I was taking a break, but I wanted to keep up. I wanted to continue sending out podcast episodes and articles and newsletters to encourage writers as they move toward their goals.

So throughout spring, in the weeks leading up to the trip, I doubled up. It felt crazy—I could never keep up that pace on a regular basis—but I produced twice the content I normally would each week. By the time I left, I’d published something each week and scheduled six additional episodes to go live while I was gone.

Having a clear goal and an unchangeable deadline kicked me into gear. I got up early; I didn’t let social media distract me. I knew this was a short burst of effort, so with a level of energy I knew was unsustainable over the long haul, I surged forward and pulled it off.

Take Advantage of Times When You Can Surge Ahead

To get beyond your current status quo—to level up—you’ll have to do something.

And most likely, you’ll have to engage with some surges of effort followed by times when content drips out a little at a time.

To arrive at your one-year goal or your three-month goal will require you to achieve milestones along the way.

To hit those milestones, you have to push hard for awhile, neglecting housework, skipping an outing, scheduling a weekend writing retreat, waking up unnaturally early for a month.

You’d be amazed at what you can get done with a surge of focused energy. As I said, it may not be sustainable over the long run, but it can help you get through the muddy middle and crest the hill so you can arrive fast and strong at that milestone—perhaps even at the next level itself.

If you want to accumulate more Twitter followers or welcome more subscribers to your email list, you’ll need to take action. You’ll probably need to produce more projects, more content, more interaction—and to see results, you may have to do it all at once, in a compressed time frame.

That’s a surge: full-steam ahead to create as much as you can.

But to continue reaping a harvest after the results of that busy season, you’ll also have to manage ongoing interaction and output, finding ways to drip it out—daily, weekly—so that readers and followers look forward to your ideas and messages.

Set up daily and weekly routines to support the commitment to follow-through on the multiple smaller tasks that contribute to the cumulative effect. Your routines are the sustainable element of the program that’s moving you toward the next level.

Maybe you write 500 words a day, and then you head off to play. Dripping out that 500 words each day adds up to 2500 words if you write five days a week and 3500 if you write seven days a week. That’s the word count of a substantial essay; multiple blog posts; a magazine article, maybe two.

In two weeks of steadily dripping out 500 words, you have enough for a substantial chapter of a book.

If you write 500 words, five days a week, you’ll have 50,000 words in 20 weeks—that means in less than six months, you’d have the draft of a trade nonfiction book.

That daily word count is an example of how even during a slowdown, words can literally add up.

What’s Next for You: A Season to Surge Ahead or a Time to Slow Down?

Next-level writers combine the work of dripping out content out over time, through routines, with surges of focused energy to push them to peak.

As you look at the level you’re aiming for—your goals and the milestones you need to hit along the way—what’s next?

Is it a surge to press into new audiences and raise visibility or to complete a project that’s nearly done?

Or is it a solid, sustainable routine that drips out content to reach readers and create change right now, day after day?

With planning and persistence, you can do what it takes to level up, during seasons when you can surge ahead as well as times when all you can do is drip out content a little at a time. 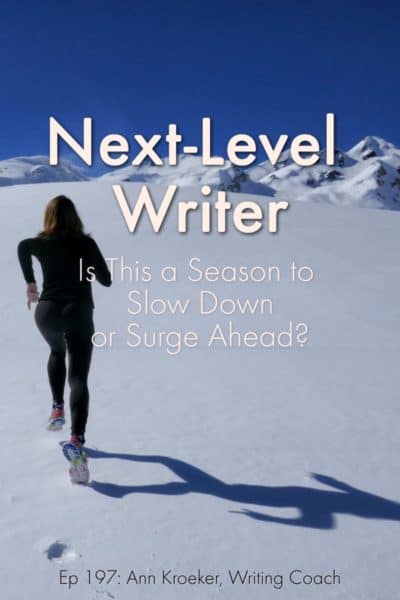