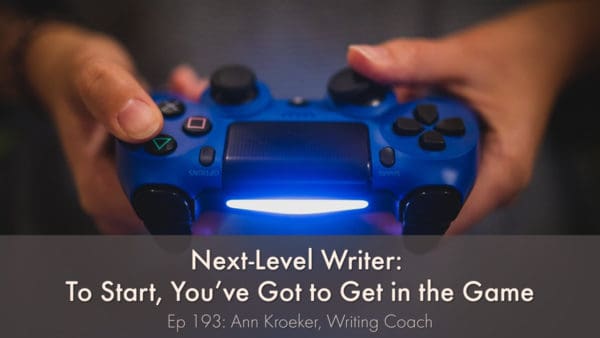 Leveling up, according to my teenage son, who is familiar with several different video games, refers to a character or creature that gains enough experience to unlock new skills or features.

For example, let’s say you’re playing a game with a dragon that has one primary skill: he can breathe fire. But not big fire; he shoots out just a little flicker of flame, like a cigarette lighter clicking open and shut.

You start the game and figure out how your dragon’s power works. He gains plenty of fire-breathing experience, as you torch abandoned sheds and defend against enemies with a burst of his flame.

At some point, you play long enough to make full use of his current abilities. You encounter every threat at least once if not twice, and you know the lay of the land. The dragon can scorch castle doors and scale turrets. He can flick out his fire to burn through the base of a tree to fell it and form a shelter.

He’s ready to level up. Unlock that achievement and suddenly you face another dragon and yours breathes out a big ol’ fireball twice the size of his original flames. This opens up new possibilities and invites bigger challenges. And with these newfound abilities, he can face them.

Writing is something like that. When we begin writing, we start with natural abilities and skills. We write and we learn what we’re capable of and we gain experience along the way. At some point, we may feel the nudge to level up, so we can see our writing expand—even explode—like a fireball doubled in size.

You’ve Got to Get in the Game

But before any of that can happen, we’ve got to get in the game.

If you want to write, you have to start writing.

When Hemingway First Got in the Game

I’m reading Hemingway’s A Moveable Feast, reminded of his early days in Paris, when he started writing stories and was figuring out his writing voice, his creative process.

He found that he liked to write in a notebook while sitting in cafes. While he was still a literary unknown he was meeting and learning from his more experienced contemporaries like Gertrude Stein, F. Scott Fitzgerald, and Ezra Pound.

He discovered a system for how to stop and start his work in progress:

I always worked until I had something done and I always stopped when I knew what was going to happen next. That way I could be sure of going on the next day. But sometimes when I was starting a new story and I could not get it going, I would sit in front of the fire and squeeze the peel of the little oranges into the edge of the flame and watch the sputter of blue that they made. I would stand and look out over the roofs of Paris and think, “Do not worry. You have always written before and you will write now. All you have to do is write one true sentence. Write the truest sentence that you know.” So finally I would write one true sentence, and then go on from there. It was easy then because there was always one true sentence that I knew or had seen or had heard someone say.”1 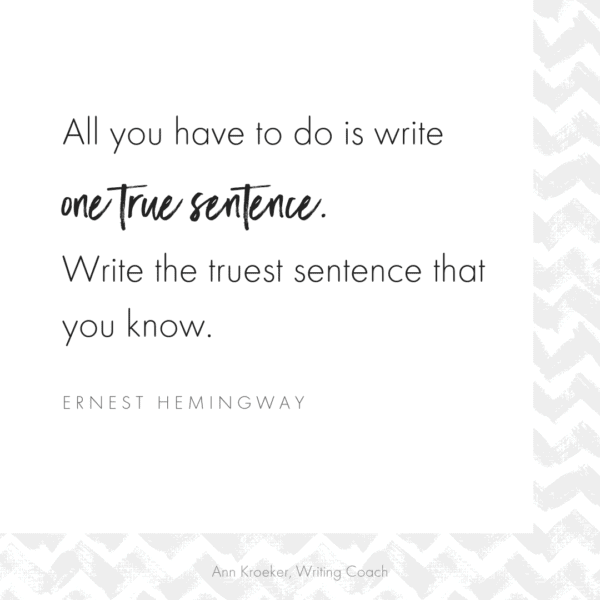 He also learned to trust his emerging style—his now infamous spare style—that relies on declarative sentences. “If I started to write elaborately,” he explains, “or like someone introducing or presenting something, I found that I could cut that scrollwork or ornament out and throw it away and start with the first true simple declarative sentence I had written.”2

In those early days he wasn’t yet famous; he wasn’t a household name. He didn’t have an editing app named after him. Like every writer throughout history, Hemingway had to get in the game before he could level up.

Figure Out Yourself as a Writer

As you commit to writing, every project you undertake gives you more and more experience. Every writing session will help you figure out your best way to work. Every connection to the writing community gives you insight into how it operates.

Before long, you’re on fire, completing entire essays, short stories, or poems. You’ll be blogging on a regular basis and proving to yourself you can produce content readers are interested in as more and more people subscribe to get updates and click through to read your next article.

Just as a little video game dragon gets familiar with the lay of the land and the pitfalls of the kingdom he’s running around in, you’ll familiarize yourself with the lay of the land: you’ll understand the online writing space, the literary landscape, the publishing industry. You’ll see what others are doing and comprehend the jargon tossed around by authors, editors, and publishers.

You’ll start to see the path to publishing and understand where you are on that path; you’ll get a general idea of what it would take to get to the next level.

But you’re not there yet.

In fact, none of that can happen if you aren’t writing.

An Easy Way to Start (or Start Again)

Some people keep talking about writing someday instead of actually writing.

Some people aren’t sure what to do to become a writer, so they do nothing.

Some people have been writing, but their output has slowed or even stopped altogether.

To get in the game—or get back in the game—these writers can take the very simple step of picking up a pen and paper to scribble out some thoughts. If that’s you, start with these two prompts:

When you finish those sentences, guess what? You’ll be writing.

So you see it doesn’t take much to get started or to start again.

A first step is to develop a writing habit or routine. You wake up and write 500 words a day, let’s say, or you’ll block out time and write for an hour. Once you establish a writing mindset manifested as a writing habit, you’ve taken the first step.

Keep writing and one day, you’ll complete a project. Once you finish an essay—especially if you’ve never written one before—you’ll feel the thrill of unlocking a creative, literary achievement.

And the cool part is: that’s not the end. That’s the beginning! Now you know how you write an essay, just as Ernest Hemingway had to figure out how he wrote short stories and later, novels.

Write and Finish Projects to Stay in the Game

Write another one, because a next-level writer continues to create. Despite fear or constraints or self-doubt, the writer levels up by continuing to do the work, day after day.

Write regularly, finish projects, and you’re in the game, friend. You’re on fire!

It may be too soon to tell exactly what you’re building and what it’ll look like. You may not know if you want to be a blogger or a poet or a novelist or a nonfiction author.

You know you’re a writer, though. When you got in the game, you stepped into that identity. And now you’re learning how to control the fire inside.

One word after another, you’re discovering what output you can sustain—how many words you can produce per day. You’re learning how many stories you can write per month, how many blog posts you can publish—how long they can be and how often they’ll be shared.

Keep writing and you’ll figure it out.

Get Through Your First Efforts

Now you might love your first efforts or be disappointed.

Have you heard of the first pancake rule? I love it because I’ve literally seen its truth in action. Every time I make pancakes—or crepes—the first one or two are kind of misshapen and unappealing, even though they taste just fine.

After those first two, I get the swing of things. The pan is the right temperature and the batter sort of settles. Before long, I’m flipping stacks of beautiful, round, puffy pancakes ready to be doused in syrup, or piles of elegant crepes ready to be rolled up with some sweet filling.

But I always have to get those first couple of wonky-looking pancakes or crepes out of the way first.

So if your first writing efforts turn out a little weird and misshapen, no one needs to know. The most important thing is that you got started and got those first efforts out of the way. You got familiar with your equipment, your ideas, your research. You got used to putting one word after another to compose a paragraph or craft a scene.

The video game dragon probably burned a few treasure maps he never meant to torch. He was just getting used to his power.

Use Your Writing Power

You have power, too. Keep using it, creating, writing, figuring out the kind of writer you are and what topics and themes you want to write about. Keep exploring your work and yourself. In the startup phase you’re learning the ropes.

Before long, you’ll be zooming along, comfortable with your progress and pleased with your work.

Why, you’ll take it to the next level. 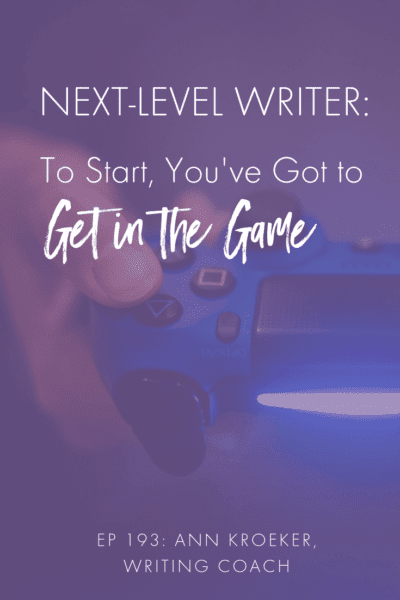