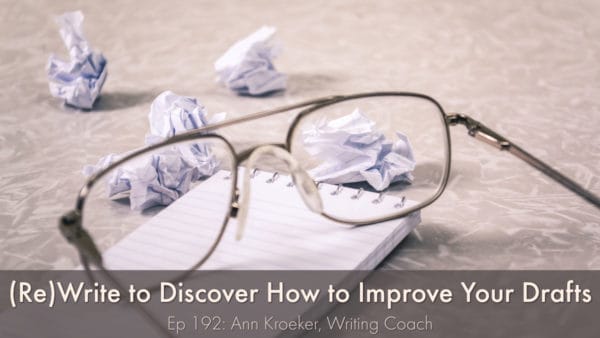 “I have rewritten—often several times—every word I have ever published. My pencils outlast their erasers.” Vladimir Nabokov, Speak, Memory1

First Drafts Reveal What You Want to Say

We can also use freewriting to bang out our initial draft. This is especially powerful if we’re doing short-form work and pour out the entire story or article in one sitting.

If we prefer, however, we can sit down after we think, plan, plot, and outline, and version one may emerge more smoothly, flowing from one idea to the next with logic and fluency.

Your personality may feel more comfortable with one approach or the other; there’s no right or wrong. The goal is to get that first draft out so you have material to work with.

Once the draft is complete, the real work begins.

It’s time to refine that draft, through rewriting, revision, and editing.

Rewrite and Revise to Improve Your Drafts

As Ernest Hemingway said in A Moveable Feast, “The only kind of writing is rewriting.”2

Editing is how we arrive at our finalized message, our finished work. Because as freeing and freewheeling as we may be when writing the draft, the project needs this next discovery phase. We need to clarify our ideas and clean up our messes. We may need to tweak and tighten.

On the other hand, if the curse of knowledge causes us to write too lean, we might need to elaborate on an idea we’ve skipped over or ignored or we may need to expand a section that needs clarity.

To revise, we must begin with the same basic instructions a high school or college student receives in composition class: know the topic, audience, and purpose of your piece.

Read with those three things in mind to be sure you’re staying on topic, providing appropriate content for that particular reader, and achieving the intended purpose (such as to persuade, entertain, or inform). For example, you can cut paragraphs where you’ve veered off topic and add information if your audience would need background information.

“All the while, I question. Is this really crucial? Are you writing this part to pose as cool or smart?

For me, the last 20 percent of a book’s improvement takes 95 percent of the effort—all in the editing.”3

Stephen King, too, reads his drafts with certain questions in mind. In On Writing, he explains:

Underneath, however, I’m asking myself the Big Questions. The biggest: Is this story coherent? And if it is, what will turn coherence into a song? What are the recurring elements? Do they entwine and make a theme?… What I want most of all is resonance, something that will linger for a little while in Constant Reader’s mind (and heart) after he or she has closed the book and put it up on the shelf.4

How to Rewrite and Revise to Improve Your Drafts

You’ll find various methods for rewriting and revising your drafts. Writers approach their work in all kinds of ways.

Some can’t move forward before they’ve refined the latest section.

Others basically freewrite and deal with the word-vomit that splatters onto the page by returning later and cleaning up the mess with next-level editing.

1. Revise and Refine Along the Way

In his book On Writing, Stephen King says Kurt Vonnegut micromanaged his drafts so that his completed work each day was crisp and clean:

Kurt Vonnegut…rewrote each page of his novels until he got them exactly the way he wanted them. The result was days when he might only manage a page or two of finished copy (and the wastebasket would be full of crumpled, rejected page seventy-ones and seventy-twos), but when the manuscript was finished, the book was finished, by gum. You could set it in type.5

I don’t want to criticize Vonnegut—and plenty of people do take this approach—but I feel this slows down most writers and keeps them from fully formulating thoughts and ideas. Peter Elbow says:

“Revising is only killing when you do it in a fruitless way—and an unfortunately common way: revising as you write and thus judging and correcting and trying to throw away every sentence while you are in the act of writing it; or trying to fix a pinched and scrawny draft that you know with a sinking heart has nothing solid in it.”6

Instead of revising and refining work while writing the first draft, I recommend writers set aside their editor-hat and write like mad without worrying about finesse or jazziness. Get the whole thing down first. Tell the whole story at once.

Then go back and fix it later.

This alternative approach of the fast draft follows stages of development. The first, of course, is to pound out the first draft. Next, set it aside for a long stretch of time—especially if the project is long form.

Distance Yourself from the Draft

To gain objectivity, Stephen King says he waits six weeks to return to his novels and advises others to wait as well.7 During that distancing, you could keep projects in your writing pipeline: write new drafts, research a book, proofread something you’re about to send out, churn out short-form pieces.

Read in One Sitting

Six weeks later, when you pick up your manuscript again, read it like you’ve never seen it before. Read it all in one sitting if you can. You’ll find it’ll need some help because every draft needs help.

“[O]nly God gets it right the first time,” King writes, “and only a slob says, ‘Oh well, let it go, that’s what copyeditors are for.’”7

This attentive reading reveals the convoluted and confusing sections. That’s what you’ll address next. 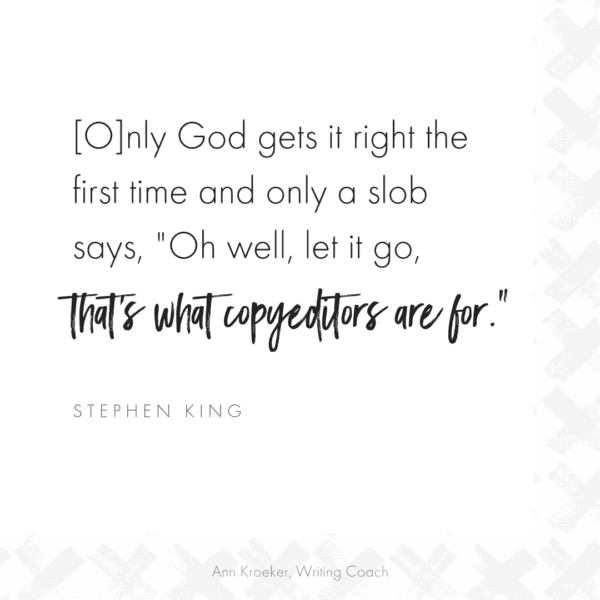 Much of the time you’ll remove hunks and tighten sections. Other times something won’t make sense and will need clarification, so you’ll expand.

Make a note to revisit sections that need clarity. “Muddled meaning is a plague among inexperienced writers, and well within reach of some veterans,” writes Susan Bell in The Artful Edit. “If you cannot say clearly what you mean, you are not clear about your meaning. Clear thinking makes for clear writing.”8

Rewrite to discover how to clarify those clunky sections so your ideas shine.

3. Scrap it and Completely Rewrite

Chris Brogan explained how he writes books in an episode of his Making the Brand podcast. He says he often scraps a draft entirely. Even after he’s written up to three or four chapters—the equivalent of, say, one hundred pages—he is unafraid to throw it away and start over.

Destroy It and Start Again

I’ll start to re-read it, I’ll read the flow, I’ll say to myself, “Well, can I imagine being the kind of business professional that would sit down and read this?” And if I go, “No. It’s boring. It’s garbage. It’s something that feels like other people’s stuff,” I throw it away and I start again… You have to be willing and not afraid to delete stuff…Some people say, “Oh, just edit your way there.” My place is just to destroy it and start again.9

By starting over, he often drops ideas and reorganizes the material, returning to his Table of Contents to revise the overall flow.

While he describes his process of scrapping that first version entirely and starting from square one, I would say if he sticks with the general subject matter, he’s still going to have that first draft somewhere in his head. So I might argue that in essence, he is to some extent revising the previous ideas—the original ideas—even though the words of his draft have literally disappeared.

Recreate It from Memory

Author and actor John Cleese wrote a script once for a television show and lost it. In a presentation, he describes what happened:

I couldn’t find it anywhere. And I was pretty disappointed, but I sat down and I forced myself to rewrite it from memory. And it didn’t take terribly long. And then, I found the original. And fortunately I was curious enough to compare the two, and what I discovered was the one I had rewritten from memory was noticeably better than the original that I had lost.

And I realized that the explanation for this was that after I finished writing the original, my unconscious part of my mind—my unconscious—must have continued working on it even though I was not aware that that was what was happening, with the result that when I came to write it out again, it was better. Why else would it have been better? Particularly as I wrote it out the second time much faster. So I began to see that there was something going on that there was a part of mind that was helping me be much more creative.10

I’ve had clients and friends reach out in a panic after their computer locked up while they were working on a manuscript. They hadn’t saved the changes for hours, so their draft or revisions were completely lost when they rebooted the machine.

Most of the time, these discouraged, disheartened, disappointed writers were able to recreate their work from memory. Although they didn’t have the original to compare with the reconstruction, as John Cleese did, it’s possible their unconscious mind continued to chew on the idea so that their second version was even better than the first.

This is another way to rewrite to discover how to improve your drafts—whether you intentionally or unintentionally scrap it all and start over.

In The Art of Memoir Mary Karr writes, “In the long run, the revision process feels better if you approach it with curiosity. Each editorial mark can’t register as a ‘mistake’ that threatens the spider ego. Remind yourself that revising proves your care for the reader and of the nature of your ambition.”11

Whether you’re self-editing or reviewing notes from a professional editor, try to distance yourself emotionally and psychologically, see it as a reader would. Instead of feeling defensive, approach it with curiosity:

The Writing Center of the University of North Carolina at Chapel Hill says:

Writing is a process of discovery, and you don’t always produce your best stuff when you first get started. So revision is a chance for you to look critically at what you have written to see:

So let go of your piece enough to let it have a life of its own and make the greatest impact possible.

Instead of defending each line of your draft, write and rewrite to discover the best way to express your ideas, to package your poems, to tell your stories. Mary Karr says to “have more curiosity about possible forms the work could take than sense of self-protection for your ego.”13

She continues, “Writing, regardless of the end result—whether good or bad, published or not, well reviewed or slammed—means celebrating beauty in an often ugly world. And you do that by fighting for elegance and beauty, redoing or cutting the flabby, disordered parts.”14

Serve your readers. Fight for elegance and beauty. Write and rewrite to discover how to produce the best possible outcome for your next project. 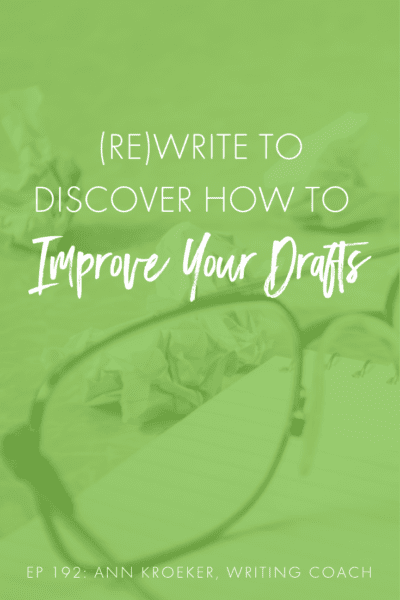