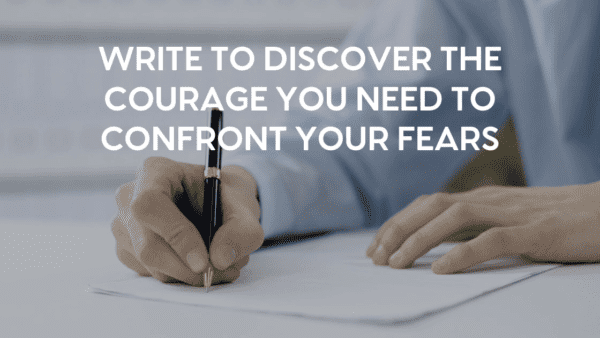 Ralph Keyes observes in his book The Courage to Write, “The trail of literary history is littered with those who fell along the way because the anxiety of trying to write paralyzed their hand”1.

If you’ve begun to reflect on troubling, traumatic memories, you’ve likely encountered fears. Some of those fears are personal and some, professional.

Digging for personal truths almost always leads to increased anxiety in the life of a writer. Keyes notes this causal relationship:

The closer they get to painful personal truths, the more fear mounts—not just about what they might reveal but about what they might discover should they venture too deeply inside. To write well, however, that’s exactly where we must venture. Melville admired most the writers he called “divers,” those who dared to plunge deep inside and report what they found. Frederick Busch thought this need for inner exploration was what made novel-writing so daring. “You go to dark places so that you can get there, steal the trophy and get out.”2

Keyes profiles several “diver”-authors, each willing to go to dark places because they knew they needed to steal the trophy and get out. The first person he first highlights is E. B. White.

The Fears of E. B. White

As a child, White was scared of darkness, girls, lavatories, speaking in front of people, the future, and the “fear that I was unknowing about things I should know about.”3

His anxiety didn’t dissipate in adulthood, either; it simply shifted. He grew up to fear that “the brakes would fail on a trolly” or that he would collapse on the street, and he continued to fear public speaking.

White also worried—to the point of obsession, it seems—about his writing. Keyes said, “He rewrote pieces twenty times or more and sometimes pleaded with the postmaster of North Brooklin, Maine, to return a just-mailed manuscript so he could punch up its ending or rewrite the lead.”4

White said, “I am not inclined to apologize for my anxieties, because I have lived with them long enough to respect them”5. White not only respected his anxieties, but he also seemed to funnel these fears into his projects—working them out, as it were. His readers can clearly see fear exhibited in such characters as Stuart Little and Wilbur the pig.

He risked negative responses to his work each time he sent off a project to be published. This added to his anxiety—no wonder he pleaded with the postmaster!

E. B. White wrote to discover his fears.

However, he also wrote to discover the courage he needed to confront those fears.

The Courage to Confront Fear

Merriam-Webster’s definition of courage is this: mental or moral strength to venture, persevere, and withstand danger, fear, or difficulty.6

Courage, then, isn’t the absence of fear. We discover the courage we need when we venture in, when we persevere, when we write despite the fear—whether or not we write about the fear itself.

Keyes believes “[a]ll writers must confront their fears eventually. The sooner they do this, the better their work will be.” He also clarifies that the courage we need to do the work doesn’t mean we “conquer” our fears.7 In fact, he seems to agree with Steven Pressfield’s claim that to silence Resistance, which includes anxiety and fear of all shapes and sizes, we must do the work.8

“Working writers aren’t those who have eliminated their anxiety,” writes Keyes. “They are the ones who keep scribbling while their heart races and their stomach churns, and who mail manuscripts with trembling fingers…. They learn how to keep writing even as fear tries to yank their hand from the page”9

Keyes goes on to suggest that anxiety is a necessary element of a writer’s life, arguing anxiety energizes our work, infusing it with truth and energy absent from safe, surface-level writing. “Trying to deny, avoid, numb, or eradicate the fear of writing is neither possible nor desirable,” he says. “[F]ear fuels excitement. Writing is both frightening and exhilarating. It couldn’t be one without the other. The best writers … convert anxiety into enthusiasm and an unparalleled source of energy.”10 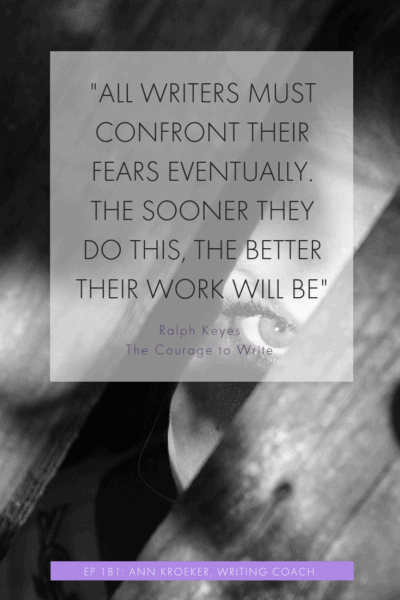 How to Write Courageously

Let’s say you see yourself in this description—you’re feeling the fear and ready to write. How? How do you convert it into a source of energy? How do you even get started?

In his book Deep Writing, creativity consultant Eric Maisel says we must manage our minds.11 If we hear voices “scolding, insulting, and mocking” us, stirring up anxiety and generating fear, we must silence those voices. And he offers a simple—seemingly simplistic—way to do this. He calls it “hushing the mind.”12

“When the voices start rising, a hubbub to keep us from our work, literally say ‘hush’ and mean it.”13

He’s been made fun of for this idea. Maybe it does sound a little silly. But before criticizing the idea, maybe try it?

He uses it with great results in the workshops he leads. “My goal is to quiet the nerves and minds of the participants,” he explains, “to let the anxiety be normalized, embraced, dissipated, to silence the demons by naming them and then smiling. The results are remarkable. People write. They write and write. They write as they have wanted to write. All I provide is a path to right silence.”14

Managing the mind by hushing the hubbub seems accessible, practical. Seek silence to discover the courage to write all you’ve wanted to write.

Write a Letter to Fear

In her book Big Magic, Elizabeth Gilbert advises readers to write a letter to Fear. Personify it. Talk to it.

In her own letter, she tells Fear, basically, she knows Fear’s coming along on a road trip and she can’t leave Fear behind, but she’s got a few rules:

Fear likes to drive, to pull the car to the side of the road, turn off the engine, and throw the keys out the window into the ditch. Fear brings us to a screeching halt so we stop taking emotional or professional risks.

We, too, need to have a chat with Fear.

If you’re feeling anxious about any aspect of your writing life, why not try it? Discover how it’s holding you back by writing your own letter to Fear. Tell it what you think. Boss it around.

Write the letter. Banish Fear to the back seat if you must. Then get to work.

In college, after critiques from professors convinced her she couldn’t write, she turned to poetry. The act of writing poetry—of writing small—lowered the stakes because she could tackle the project word by word by word and because she wrote poems for pleasure, not on assignment.

It’s easier to find courage when you only need it for small chunks of text and time, so try writing small.

We can not only write small to gain courage—we can also write fast. The draft may be messy and redundant and long, but you can slip past the fears if you compose without thinking of any readers. Just go for it. On a keyboard, you can churn out 500 or a thousand words with relative ease and speed.

You’ll find courage to write what needs to be written when you tell yourself it’s only a draft. So spill it without stopping.

The computer’s great for this. Fingers move fast and the format is flexible. After recording the initial draft, computers offer freedom to play around and move a passage here or there before committing. Knowing we don’t have to get it right the first time also releases some anxiety.

Author Brenda Ueland had students so paralyzed by the fear of writing badly they wouldn’t write a single sentence.

She’d tell these writers, “‘See how bad a story you can write. See how dull you can be. Go ahead. That would be fun and interesting. I will give you ten dollars if you can write something thoroughly dull from beginning to end!’ And of course no one can.”18

With this assignment, Ueland’s creatively blocked students would find the courage to write a few sentences in their attempt to bore their instructor. “And since everybody who is human cannot say a sentence without revealing something—something mild or violent or waggish in their souls—or without having something fine in it, I would point this out. Courage would expand and they would gradually write more.”19

If you are anxious and fearful, write dull, write something truly terrible, to feel courage expand. As Ueland says, “Try this yourself. It is a relief and you see then how you are not dull at all.”20

Write to Discover the Courage to Write

Your discovery becomes theirs, as the writing transforms both writer and reader. 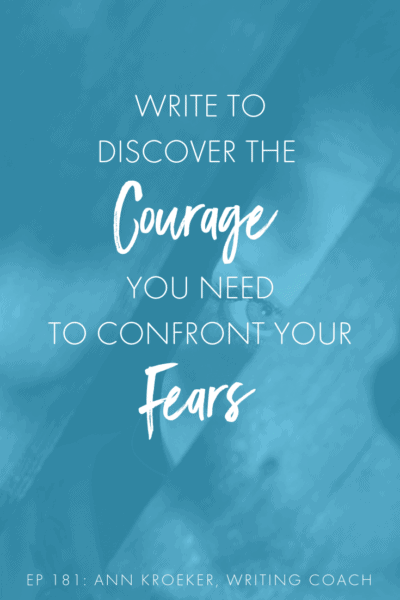