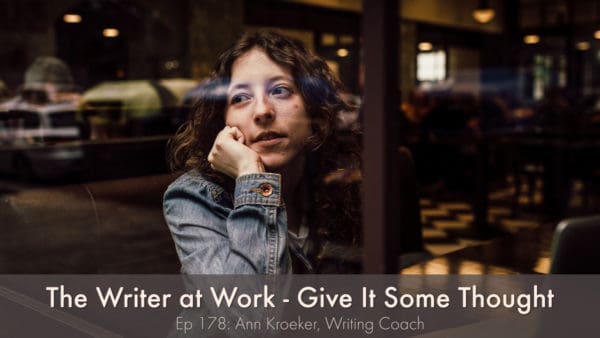 My first university-level creative writing course used as the main text a book that, at that time, was a brand-new release: Writing Down the Bones, by Natalie Goldberg.

After moving through the exercises in that book, I felt transformed. Goldberg introduced a simple concept that I’d never heard of. It’s commonplace today, a part of the lexicon of most creative writers.

The Life-Changing Magic of Freewriting

The practice of freewriting unleashed in me the memories, stories, images, and ideas that I hadn’t yet reached when I sat down to write using conventional approaches of the time. I’d been making notes and lists, thinking and outlining, then trying to write into an outline. I was taught that approach, and it seemed sensible and efficient.

My work, however, was clunky, uninspired, unremarkable.

Goldberg’s invitation to freewrite—to set a timer for, say, ten minutes and write, pen to paper, without stopping—gave me a way to shimmy past my stifling editor-mind to what Goldberg calls “first thoughts.”

Write without stopping. Write without correcting commas or crossing out words. Write garbage without worrying who will ever read what you’re putting down.

As I freewrote, I stopped editing my work and second-guessing myself. I blew right past the voices of criticism and tapped deeper thoughts, luring them to the surface.

Before freewriting, I was a nervous writer, stifled by all kinds of worries.

Having grown up with editor-parents—and I mean that literally; they were both newspaper editors—I tended to prejudge every idea, every sentence, reading each word as if picturing a red pen dangling over my page like the Sword of Damocles. Before a thought had a chance to breathe a single breath and stretch its legs, I’d strike it out and pretend I’d never entertained its existence.

Freewriting led to a kind of self-discovery, and from that I was able to produce poetry with punch and narratives that held interest and dove deeper, below the safety of surface-level, where until then I’d been dog-paddling my way through assignments.

I wrote about struggles and questions and memories and dreams, exploring it all in hopes of finding something worth developing into a finished piece and sharing with others.

This tool more than any others powered my writing life forward. 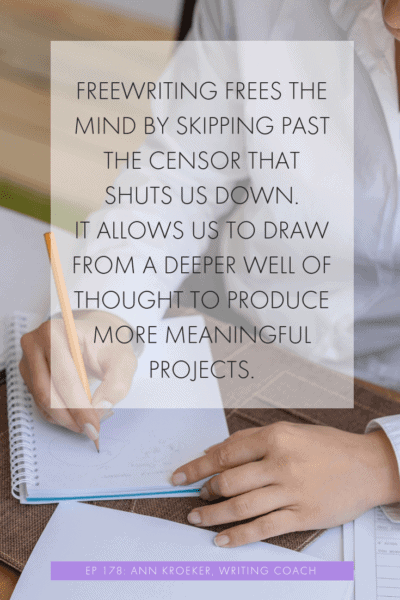 Years later, I hosted a family friend overnight. She was passing through town and we shared a meal and chatted about writing. Freewriting came up.

I don’t remember exactly what I said, but I’ll bet I praised the way it frees the mind by skipping past the censor that shuts us down and allows us to draw from a deeper well of thought to produce more meaningful projects. I might have testified to its transformative effect on my life. I probably recommend it to her.

She’d heard about it, she said. Then, when I seemed to have exhausted all I had to say about the merits of freewriting, she told me she had recently attended a small, intimate writer’s retreat led by Madeleine L’Engle.

I was insanely curious what that was like. And I was insanely jealous, because Madeleine has been a hero of mine for decades. As a child I’d read A Wrinkle in Time, riveted to the story, the characters, the message. When I later realized she’d written nonfiction, I devoured her Crosswicks Journals and Walking on Water.

This family friend had the privilege of participating in a tiny writing retreat that left time for lots of interaction with Madeleine.

Well, she did. She said Madeleine would give the attendees a creative writing prompt, that always included this instruction or “rule,” if you will: think as long as you want, but once you decide to start writing, write for only 30 minutes.

Throughout the retreat, Madeleine had the writers share their work and would then send them off with another prompt that included those same instructions: think all you want to about the idea, but once you begin to write, write 30 minutes.

I thought of the power of freewriting, how the idea behind it was to think as you write, or perhaps to minimize thinking. Certainly one goal was to avoid overthinking. At any rate, I remember feeling terrible, questioning Madeleine’s approach and imagining she might question my beloved freewriting.

Which Is Better: Freewriting or Think, Then Write?

Madeleine’s approach trained the writer to think through ideas and images and make connections in one’s mind prior to putting pen to paper. She didn’t ask them to talk it through or conduct research or make a list or an outline. She just said to think. Then write.

It had me, well, thinking:

Is it better to think AS you write?

Or to think, THEN write?

Is one more effective than the other? Does that stretch of thinking warm up the mind and invite deeper reflection? Does it save time and words by getting preliminary confusion out of the way so that when the writing begins it flows with some semblance of order conjured up during that thinking time?

I asked my friend if she liked Madeleine’s approach, if she wrote better or worse than she normally would.

Better, she said. Much better.

Really, she said. Everyone said so.

Everyone at the retreat.

Over the past few weeks, I read The Writer’s Portable Mentor, by Priscilla Long, a book Patrice Gopo recommended in my recent interview with her. Priscilla recommends what she calls daily timed writing, which is a freewriting exercise.

Keep a timed-writing (or writing-practice) notebook. In it, write for fifteen minutes every day…. Write without stopping. Do not be concerned about being good, interesting, or correct. Writing is a discovery tool that belongs to you.

Long says to continue this practice regardless of the more formal work-in-progress you’re committed to. She sees it as a kind of bridge between our inner life and our outer work.

It keeps you generating new writing. It forever eliminates the sporadic work habit.

She suggests using it to describe something in a room or think about some aspect of an essay in the works and write freely about it before moving into the essay itself. In those instances, the practice serves as a kind of prewriting exercise. If something usable emerges, you can copy it over into the draft of the essay.

You could use Priscilla’s freewriting approach to plan out your next big project or your goals for the new year. In the notebook, a writer can ask questions about the world, the news, the theme of her project, or her greatest fears.

This writing notebook, filled with freewriting, serves the writer and her work.

Both-And: Both Freewriting and Think, Then Write

Can the writing notebook and its daily freewriting be one tool used in conjunction with Madeleine’s think-then-write approach? Could we have both-and? Both a think-then-write and think-as-you-write practice going at the same time?

So does Priscilla Long.

A focus of The Writer’s Portable Mentor is to look for what she calls “virtuoso writing” to use as models and inspiration as we improve our own writing. She devotes several chapters to structure, and includes essays and short stories to illustrate various options, such as theme, collage, and braided structures.

Skipping discovery writing, deciding on a structure, and then forcing material into it like stuffing a sausage may result in writing that is too thin, with a forced or contrived feel. Discovery writing…in the writing practice notebook makes the work richer, more layered, and more insightful. But doing writing practice endlessly with no structure in mind puts you on the road to Never Never Land — never finishing, never publishing. (80)

Before Natalie Goldberg and my college professors introduced me to freewriting, I was stuffing sausages. My writing was too thin, forced, contrived.

I flourished when I discovered what I wanted to say and worked out my thoughts on the page. It prepared me to write with purpose. 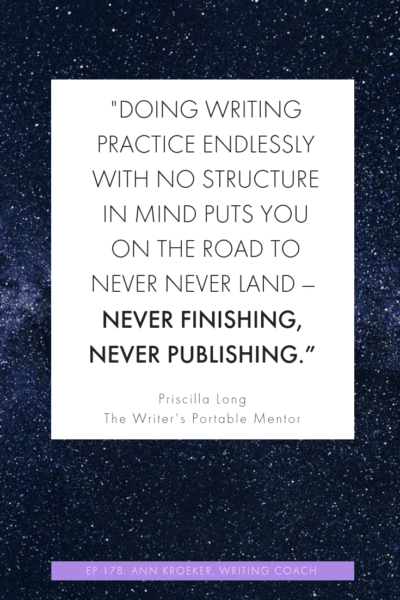 Perhaps this was Madeleine’s concern, as well. With Madeleine’s approach, we write with purpose, even a bit of a plan. Without a plan, without some structure in mind, without thinking it through before writing a draft, we could be trapped in an aimless, purposeless process. Without a plan, freewriting incessantly, we produce thousands of words with no purpose or destination.

In that sense, embracing a practice of freewriting that often explores something connected to a work-in-progress adds purpose. To also embrace a practice of thinking before writing the first words of the first draft, we avoid the stream of unrelated questions and concerns that flow into a typical freewrite.

By forcing mental focus—to think about the prompt or the project in advance—we progress much faster.

At the same time, by regularly capturing description, dialogue, memories, responses to reading, and whatever else tumbles into a freewriting session, we gather raw material—even some usable phrasing—to use in our more formal projects.

After years of practicing writing, testing out many methods and techniques, I have produced work I’m proud of by thinking long about a project before tapping out a draft, just as Madeleine L’Engle advised my friend and my friend passed on to me.

And I have produced work I’m proud of by writing my way into it. I’ve used freewriting not only as a daily practice apart from my projects but also as a way of drafting a project.

We can try to trick the mind and get past censors and perfectionism to truer, more engaging ideas and thoughts with freewriting. Or we can think and plot and plan before we sit down and tap out the first words of a project. Either way, we’re trying to think the right way at the right time to produce the best possible final product.

When you’re a writer at work, you must give it some thought. Try out these techniques and see which one works best for you. 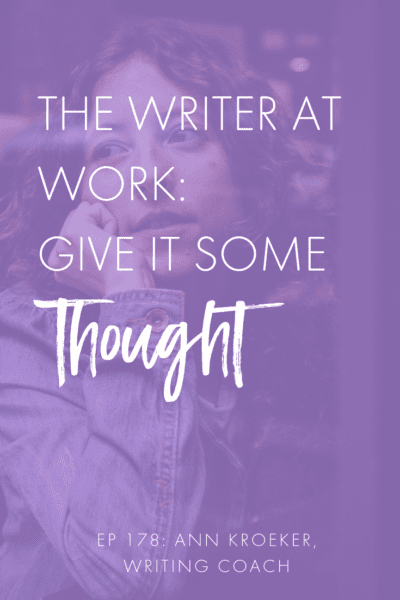