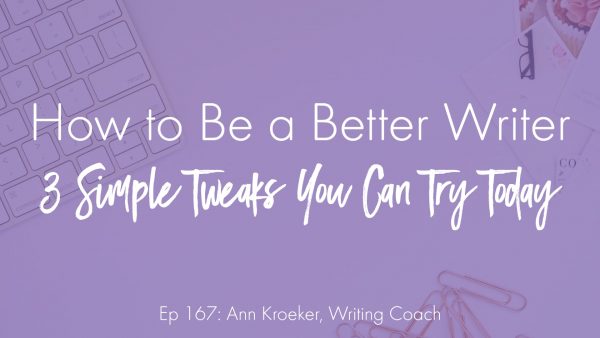 Last week I talked about the mindset that believes growth is possible—that you are neither stuck at your current level nor have you arrived at mastery. With that mindset, you can begin to evolve and improve.

Today I recommend three simple writing tweaks that will keep your readers interested and engaged.

Propel your story or idea forward with active, vivid verbs. Don’t fret about your word choices as you write your draft, but in the editing stage, especially, look for places you can swap a flat, lifeless verb for one that keeps the reader alert and engaged.

When you identify words like these that slow down your work, you open up new opportunities to improve. Start fishing for verbs that energize your writing and dream up new ways of expressing an idea or scene.

Let’s say a writer describes a troubling situation in her kitchen. She writes, “The Instant Pot made such weird sounds, I worried I’d missed a step with the lid position or the settings.”

By simply choosing a more vivid verb than “made” (“The Instant Pot made such weird sounds…”), creativity kicks in and the whole scene picks up. Like this:

“The Instant Pot fizzed and spit as the silver peg jiggled and wobbled. Did I miss a detail in the instruction book? Should I turn the lid one notch tighter or pick a setting lower than ‘ultra’?”

The scene expanded and changed in tone. By playing with the verbs, the sentence came alive.

This simple tweak can produce stronger writing in all genres. Turn to active, vivid verbs whenever possible and play around with options.

Consider this common sentence structure: “There was a jogger who outran a terrier that nipped at her heels.”

Because “There was” includes a form of “to be,” I could have lumped this suggestion under the discussion of flat, lifeless verbs. Instead, I want to address this on its own.

>> “There was” Fills in for Unknown Subject

Sometimes we use “there are” when we aren’t sure who or what the actor or subject is. Newspapers rely on this when reporting on a situation with limited information. “Last night there was a robbery at the gas station on the corner of 5th and Main.”

>> “There was” Can Hide an Identity

A writer might rely on “there was,” “there are,” or “there is” to avoid casting blame.

For example, a mom might write in an email, “I’m going to miss the meeting. There was a flood in our house from an overflowing toilet.” She chose “there was” on purpose to avoid pointing fingers at the particular child who flushed an entire roll of toilet paper and clogged the toilet to overflowing.

Sometimes identity doesn’t matter. “There was a pine cone jammed in the gutter.” No need to blame the squirrel or the wind when the focus of a scene is the pine cone itself.

As you can see, this construction comes in handy from time to time. But in general, avoid using it—especially because it can so easily be rearranged to create a more engaging alternative.

>> Alternatives to “There was”

I can rearrange the example and play with variations.

Launching with “A jogger” instead of “There was” animates the scene compared with the original, which feels like a bystander is pointing over “there” or a witness is describing what she saw (“There was a jogger…”).

Another example: “There was a student in my writing class who pointed out every error in my assignments.”

A quick revision? Simply remove “There was” and begin, “A student in my writing class pointed out every error in my assignments.” This simple change cleans up the sentence and inspires additional tweaks. Remove “there was” and play with alternative wording to liven things up even more.

Play with variations to discover nuance and possibility.

When you spot “there are” or “there is” sentences in your work and ponder ways to revise, you’ll see right away the benefit of using specific nouns.

But we’ll breathe even more life into it when we add the specific bird and a verb that matches.

“A sparrow twittered outside my window.”

That sentence works better than “A bird is singing” because anyone who has a general idea of what a sparrow looks like can conjure up a more precise image in his head than if it were just “a bird.” The reader can practically hear its birdsong when you add the verb “twittered.”

“A crow cawed outside my window” brings up a different image, more jarring and just as engaging.

“A mourning dove cooed outside my window” generates yet a different mood and tone while igniting the imagination.

If you work in fiction or poetry, you can swap out one bird for another until you find the one that best fits your scene. Those who write nonfiction can go back to their drafts and fill in the gaps by inserting specifics as accurately as memory serves.

You saw the added bonus of matching a vivid verb to the specific noun, so each choice inspires another.

Seek a Balance of Specificity and Simplicity

Avoid slowing down your work with meaningless or excessive detail. For example, if we weigh down our fiction, the reader may start to worry about how much she needs to remember in case one of those specific nouns shows up later as critical to the plot. Add unnecessary details to nonfiction, and the reader can feel like you’re wasting her time.

We’ll discuss this in more detail next week.

For now, play with specific nouns and active, vivid verbs to find the degree of specificity ideal for a particular project. If you re-read a version you’ve adapted and worry you clogged up a paragraph with too many details, you can always go back and plunge out anything extraneous.

You may be familiar with these tweaks and appreciate the reminder to read through your drafts with them in mind. Or maybe they were new to you and you plan to implement them in your next project.

Either way, I hope they become writing tips, tweaks—even tools—you can use to be a better writer. 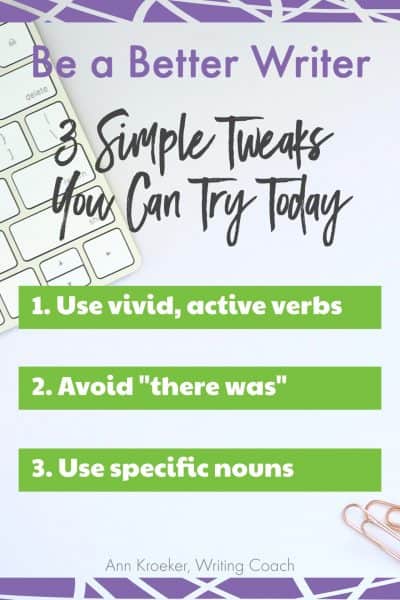 I have a free mini-course called: