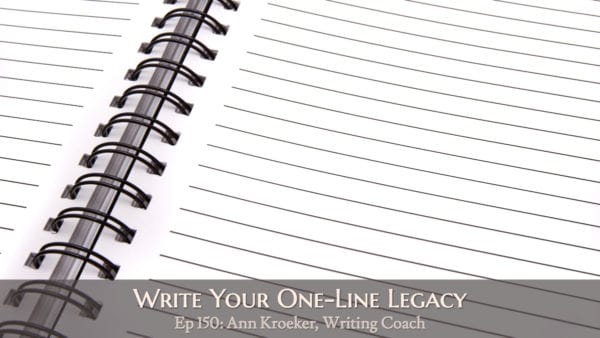 About 20 minutes before the my dad’s calling and funeral service were scheduled to begin, we were milling around, chatting with various family members, organizing papers for the service.

Throughout the week, my brother and I searched for photos and significant mementoes to display or add to a slide show.

During that search, my brother unearthed a scrapbook I created decades ago. He brought it to the funeral home, since it spotlighted a lot of Dad’s family members and memories.

I’d forgotten all about it, but apparently I’d interviewed Dad as I showed him items like an old clock or a painting. I also pulled out his old photo album filled with images of his family members. Most of them were old, old photos dating back to the early 1900s.

Maybe I made this for a college class or for a birthday gift, but whatever the reason, I recorded him talking as he described the item, the original owner, and told stories about the people in the album. Then I transcribed everything and put it together in this scrapbook.

I handed it to my nephew. “Did your dad show you this?”

He took the scrapbook and shook his head no.

“Well,” I said, “these are stories I had Grandpa tell me about people and stuff. You’ll recognize the clock and some of the artwork. You might enjoy it. It’s your family, after all.”

Before long, my kids and their cousins were all leaning over the album, reading the stories and looking at each item. I was standing nearby when I heard them all laugh about one of their grandpa’s recollections.

“It’s this ‘Uncle Ed.’” My nephew pointed to an old photo. “Grandpa went on and on about other family members—this lady was a nurse in the Army and this guy was a captain and was really important. Then all he had to say about Uncle Ed was…”

My nephew leaned down and I could see the slim strip of paper I’d printed out and mounted below the photo of a man. “‘Uncle Ed didn’t do much with his life.’” He looked up. “That’s it. That’s all he has to say about Uncle Ed.”

Everyone laughed yet again.

“Poor Uncle Ed!” I said. “Surely he did something with his life?”

Reducing a Life to One Line

My brother had joined the conversation by now. “You know,” he said, “when you get one generation past the death of someone, your whole life does seem to get reduced to just a few stories.”

My brother would deliver the eulogy that day. He said it was hard to know what to highlight about Dad out of all his stories and all his interests.

My brother continued, “When you get a couple of generations removed, like Uncle Ed is to us, sometimes all that’s left is one single line.”

If I’m remembered for just one line, I hope it isn’t, “Ann didn’t do much with her life.”

Writers Leave Behind More Than a Line

Simply by writing—by building a body of work, especially nonfiction but fiction, too—we control the narrative we leave behind to some extent. At the very least, we offer a collection of source documents, if someone ever wants to dig in and learn more.

One-Line Legacy – A Summary of Your Life

In episode 149, I urged you to write your own obituary or eulogy, reflecting on a life you’d like to live. That obituary is a summary of a life, not a biography, but it can be long and fairly detailed.

This time, we’re going to summarize even tighter: What one line would you like to be remembered for?

If we get to the end of our life, and a generation or two removed, and some great-great-grandnephew points to your picture in an album, what one story would that be? Assuming you could control what’s remembered, what would you want the cousins leaning in to read?

What’s the one thing you’d want to be known for if your life was reduced to one simple idea?

Write that down. It’s your one-line legacy—the one you hope to leave behind.

Give that some thought, write it out, and then hop on social media to share your #onelinelegacy. 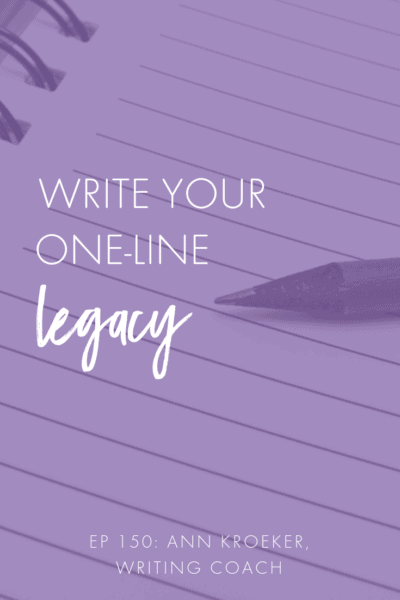