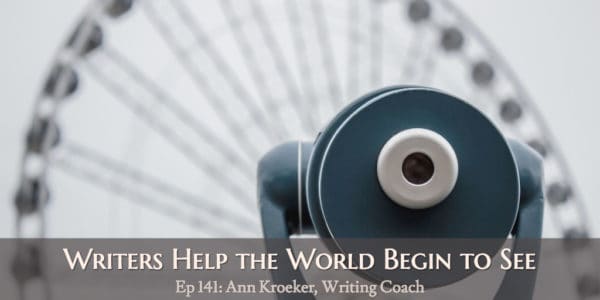 Photographer Walker Evans said, “Stare. It is the way to educate your eye, and more. Stare, pry, listen, eavesdrop. Die knowing something. You are not here long.”

Pay attention to this world. Learn something. And then, I might add, give it away. Before you die. Because life is short and there’s so much to say.

We writers join the photographers and fine artists and children as the watchers, staring at the world around us, noticing what others brush past or ignore.

We’re the ones who see and take note. We pry, listen, eavesdrop. We press in and push out, serving as a conduit of whatever truth we’ve taken in.

We stare a long time and sometimes stand up, walk to another location to gain a different perspective, and stare even longer—this time from that other angle.

Capture it. Verify, as much as possible. And bear witness with honesty and humility.

The Unexpected in the Everyday

Sophie Howarth & Stephen McLaren, authors of Street Photography Now, respond in part to the Walker Evans quote, as they describe the work of street photographers in terms that sound something like the work of writers. They say:

Street photographers elevate the commonplace and familiar into something mythical and even heroic. They thrive on the unexpected, seeing the street as a theatre of endless possibilities, the cast list never fixed until the shutter is pressed. They stare, they pry, they listen and they eavesdrop, and in doing so they hold up a mirror to the kind of societies we are making for ourselves. At a time when fewer and fewer of the images we see are honest representations of real life, their work is more vital than ever. (excerpted in The Telegraph)

We writers can do the same kind of work as the street photographers. When we do, we elevate the commonplace and familiar into something bigger, even “mythical” or “heroic.” We, too, thrive on the unexpected in the everyday. Our work, too, is more vital than ever.

Make Much of What Others Pass By

Dinty Moore of Brevity Magazine tweeted a quote from Steven Church, who said: “I think our obligation as essayists is to make too much of things that other people wouldn’t make much of.”

Essayists, poets, novelists, memoirists: look around. In the commonplace, familiar world we inhabit, we see the bigger themes, the more profound truths, the window into what our world is becoming. We do this, in part, by noting what some small piece of it has become. We make much of things others pass right by.

Every writer can learn from the street photographers.

We can learn to stare. Pry. Eavesdrop.

Take it all in. Use every sense. Take it all in and get it all down, even if you don’t write about it until a week later, a month later, a year later. But don’t wait too long.

Help the World Begin to See

In the play Our Town, the character Emily is speaking to her loved ones when she says, “I love you all, everything. – I cant look at everything hard enough.” Her monologue models attention to detail and inspires every theatergoer, every writer—every human being—to do the same.

She cries out to her family to look at each other. She realizes too late how fast life goes, how we don’t have time—or take time—to look at one another.

“All that was going on in life and we never noticed,” she says.

She takes one last look as she says goodbye to the world—to the town, to her parents, to clocks ticking, sunflowers, food, coffee. She bids farewell to such simple things as “new-ironed dresses and hot baths? and sleeping and waking up.”

“Oh, earth,” she says, “you’re too wonderful for anybody to realize you…Do any human beings ever realize life while they live it? – every, every minute?” She goes on, “That’s all human beings are! Just blind people” (Stage Agent).

Life goes fast, friend. Let’s look at one another. Let’s look at everything hard. Let’s notice the ticking clock, the sunflower, the scent of an orange peel, the swirl of a cowlick in a child’s unruly hair, and the swirl of cream on coffee that we sip slow enough to stop…and stare.

You and I, as writers…maybe we’re some of the few who can realize life while we live it, and help the world begin to see. 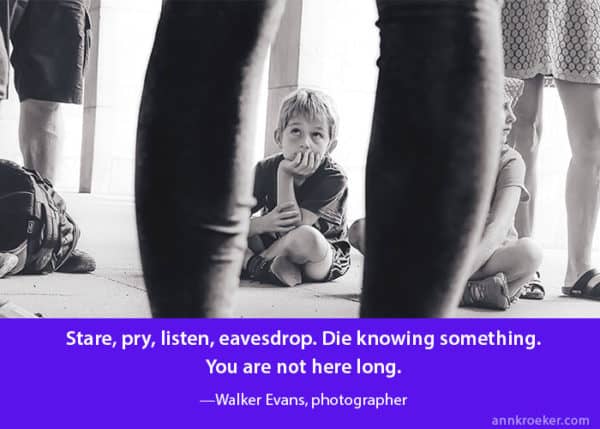