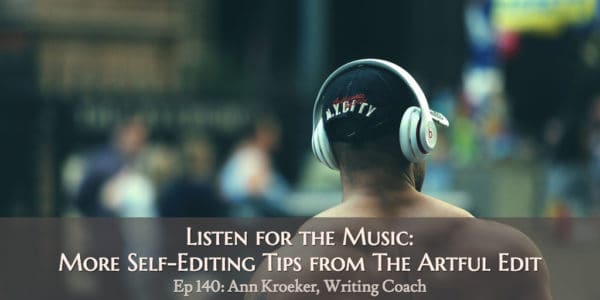 In her book The Artful Edit, Susan Bell says editing “involves a deep, long meditation within which the editor or self-editor listens to every last sound the prose before him makes, then separates the music from the noise” (5).

We talked last time about the need to listen—we even explored ways to do so. Now we’re taking it to a more intense level involving “a deep, long meditation,” as Bell emphasizes the need to listen to “every last sound the prose” before us makes.

This takes time. Attention. Focus. We’re making decisions based on what we hear, listening with a discerning ear, to separate the music from the noise.

Listen for the music. 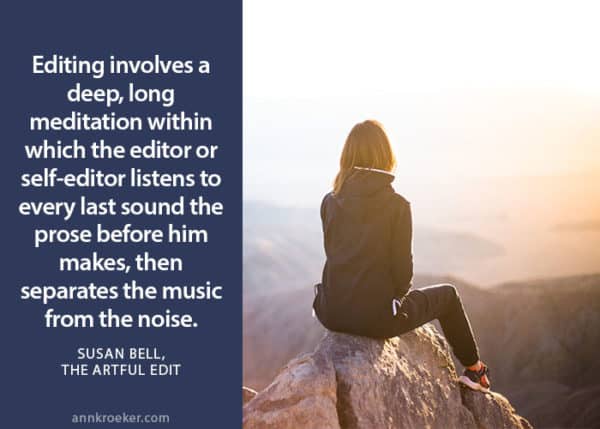 Let’s start with the noise. I suspect most of us would agree we writers don’t want to add to the noise of the world, nor do we want to simply make noise with our words. No need to sound like a clanging cymbal unless that’s adding pizzazz or punctuation to drive home a point.

So we must recognize when a passage isn’t pulling its weight. Have you read something that feels like it’s sagging, long-winded, or slow? Yeah, that’s probably a sign it ought to be examined more closely and tightened or even eliminated.

Susan Bell says in a later chapter, “Develop your editor’s eye to see where your words slouch.” Though she’s switched from listening to seeing, I suspect avid readers who have grown to love the sound of words can see or sense a slouchy passage, especially when reading aloud. We may be able to spot it on the page, too, if the paragraph is packed with long sentences, too much detail, or lack of clarity or focus.

You’ve probably hit a sluggish, slouchy passage if you realize you’re speed-reading to rush through a section or you caught your mind wandering. Your text probably needs attention if you’re reading and re-reading a passage because it didn’t click the first time.

And heaven forbid if your eyes glaze over.

The late Ben Bradlee, legendary editor of The Washington Post, coined a term for a bad story: “mego.” A story that bored him was “mego,” M-E-G-O, the acronym for “my eyes glaze over.”

If you’re reading and your eyes are glazing over, flag that section. Come back and tighten it, condense it, or if it isn’t necessary, simply delete it. Slouchy words and passages will tire or bore your reader. You’ll risk mego.

So let’s talk about the music. Bell advises, “you can rhythmically hold on to [your reader] by controlling the musical measure of your prose” (119). A balance of sentence length is a simple fix, but it’s not a science. I can’t tell you to add three compound-complex sentences followed by a short sentence for the perfect combination.

I like to think we’ll know music when we hear it.

It’s the sound of the sentences flowing from one to the other. It’s the word choices that roll off the tongue with ease. It’s the idea that engages the mind without having to read it twice and the scene that unfolds naturally so the reader practically steps into it.

The flow of the passage serves the story or the idea. The music serves the message.

I’d always write out loud. When I got that opening, I would repeat it out loud, over and over and over…because it was so important to me that the sonic qualities were intact in every single line. A lot of my self-editing would be preoccupied with trying to maintain the standard in my head of musicality. (171)

She seems to enter that long, deep meditation Bell describes to listen to every last sound the prose makes. She’s intent on making music, first. Above all.

When crafting lyrical prose—or trying to—writers are tempted to go too far and often produce “purple prose,” a term for passages that have grown too flowery, elaborate, excessive, or ornate. They’re overwritten and overwrought. Out of the blue, a series of adjectives plucked from a thesaurus line up to modify a person or place. It’s too much.

“Beige prose” indicates the other extreme: spare writing that, if taken too far, can end up choppy and unclear. Those who prefer spare writing still appreciate musicality and find their own rhythm in a streamlined style. It may be deemed “beige” if it bores the reader or strips down the story to such bare bones it loses its punch.

Instead of using the phrases “beige prose” and “purple prose,” Bell uses the terms “minimalist” and “maximalist” to indicate which end of the spectrum a writer might lean.

We all have different styles, some more maximalist—more descriptive and lush—than others who prefer a spare, minimalist approach. It’s why we have both Hemingway and Faulkner, Dickinson and Whitman. We have leeway and can write musically with either. Just be careful not to veer too far in one direction or the other.

Even a writer driven by a desire for musicality in her work—potentially a maximalist who avoids the extreme of purple prose—can find reasons to shift. Not that she suddenly donates her flowery boho wardrobe for a set of neutral suits and loafers. Rather, she stays open to sacrificing her darlings to ensure clarity.

When Caponegro began working with editor John Glusman, she said of his input:

It was disconcerting at first to have someone saying, ‘Do you really need that sentence to be that long? Can we make three sentences out of it?’ I had been given such license to be excessive. (170)

She began to see that her priority of beautiful writing caused her to “always sacrifice clarity” for what she “considered a poetic achievement of the line” (171-172). Her current editor prioritizes clarity over musicality. As a result, Caponegro reports that “[a]ny word that seems off, any idea that seems like you have to give it the benefit of the doubt, any clause that’s a little floppy, he is just ruthless” (172).

Bell says of Caponegro, “Formerly possessed by the harmonics of her story, Caponegro tries harder now to balance harmonics with clarity.”

While we may listen for the music as we edit, the musicality must avoid becoming a kind of noise itself. This fits with what Ayn Rand said in her book The Art of Nonfiction, “The first absolute is: be clear. Drama, jazziness, color—which can be added later—are never as important as clarity.”

Be careful, then, not to dedicate so much of the manuscript to achieving a musical feel that your words lose their meaning. Passages must have purpose to earn their right to stay in the piece.

It’s an art, not a science. We learn to see and listen, making decisions based on what we hear, to separate the music from the noise, to steer clear of purple and beige and find the place on that spectrum where our writing sings.

An editor, a good one, reads to discover a new voice: a fresh sound in the ear, an as yet unmapped route to a particular emotion or thought. Surprise is the editor’s drug of choice. A writer needs to relish the surprise of his own voice just as an editor does. (11)

It’s what an editor is looking—and listening—for: writing that surprises. When we find that sweet spot, that balance of music and meaning, we’ll offer our finest song. 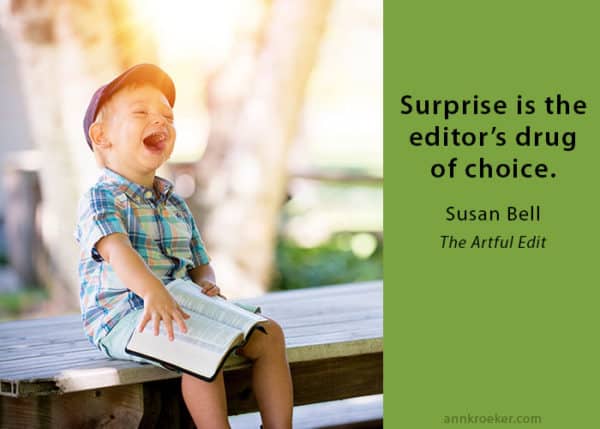