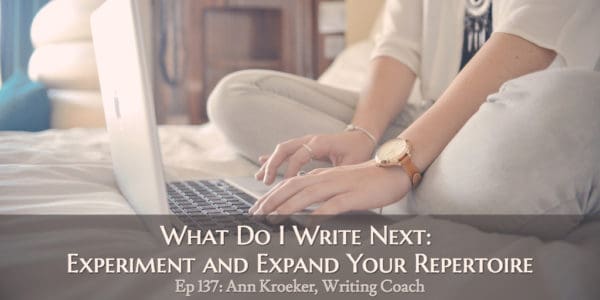 Last time we talked about enjoying our vein of gold as we decide what to write next.

To discover our strength as a writer—writing that represents our brightest, most brilliant contributions—I proposed we may have to experiment and try new genres, new subject matter, or even expressing ourselves in a new and different voice that may turn out to be our truest voice.

What intrigues you? What have you been tempted to write? How might you write it?

Experiment. Give it a try.

Through these experiments, we might uncover something we’re better at than anything we’ve tried before. Or we may confirm that our vein of gold is what we’ve invested in the most already.

Either way, we learn something new. And even if our experimental efforts aren’t going to win a National Book Award, we will have expanded our repertoire and quite possibly our very selves.

Experimentation is how to tap into new spaces inside…discover new possibilities…gain new insights.

If you’re going to step out of your comfort zone to try something new, however, you’ll be taking a risk. You probably already thought of that—it may be what’s holding you back. Risk-aversive writers may resist, and I can’t promise your experiments will end all rainbows and unicorns.

Your experiment could have any number of outcomes:

Then again, your experiment might result in something far less dramatic. You might simply learn a clever new technique or dig up a pleasant memory. You might make yourself and your reader chuckle or shed a tear before shifting back to the tried and true work you’re known for.

Whether your experiment lands you at one extreme or the other—or somewhere in-between—don’t be afraid to try. If you’re tempted, give it a go. In the film The Greatest Showman, P.T. Barnum’s protege Phillip Carlyle says, “You’re risking everything you’ve built.” Without missing a beat, Barnum replies, “Well how do you think I built it?”

Readers not expecting you to tackle a new topic or genre or tone may be thrown off and respond with shock, surprise, delight, or derision. You won’t know until you try.

But risk, even in the form of tiny, everyday creative risks, is how you grow as a writer and, over time, it’s how you build a writing career.

Monet often painted the same subject in a series—haystacks, bridges, lily pads, a cathedral. He experimented with subtle changes in light and color, and the impact of weather and time of day on the scene. Given that, one might argue he stayed in his vein of gold. 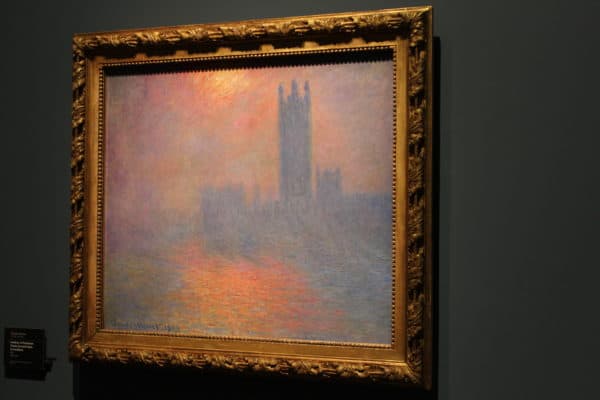 But Monet, the father of Impressionism, didn’t start out with those famous quick brush strokes he’s known for today. He started out with charcoal, then trained with oils, experimenting with a new medium and eventually a new style. He submitted his early work to the Salon, you know, the “establishment,” and those first pieces played more or less by the rules of the day.

Eventually, though, he experimented. He expanded his repertoire. He took his work outdoors, en plein air, and shifted to give the impression of a scene more than rendering it realistically.

The “establishment” didn’t react favorably. Monet, you may recall, formed a group of artists that held their own exhibition in another part of Paris. Today, their style seems normal to us, quite appealing, but it shook the art world of 19th Century Paris.

If you’ve maintained a website about horses for five years and you suddenly write and publish a political satire post, readers will react. They’ll scratch their heads or even unsubscribe.

When you’ve worked hard to build credibility and name recognition associated with an idea or type of writing, that’s probably not the best venue for your risky experiment—that’s a little like Monet trying to submit one of his water lily paintings to the Salon and feeling surprised they scoffed and rejected his work. If you throw a curve ball at readers who aren’t expecting it, they might not react favorably even if your product is great.

If you’ve built a brand or you write for an organization, I suggest you stay consistent in those places and experiment elsewhere—at least at first.

Play in another sandbox, if you will. If you try something new and realize it’s not for you, you’ll be able to easily slip back to what’s familiar without disrupting those readers and that space unnecessarily.

If you try something new and land on something that excites you and pulls out the best in you, however, you can more easily shift, transition, or pivot to something different—like Monet forming his Impressionists group—and you can step into a new identity and explore your full potential in that other sandbox.

And if you decide to rebrand your existing space to reflect your new passion and strengths as a writer, you can do so with a more thoughtful transition plan.

So you have options and freedom. What you write next doesn’t have to be presented to the public in the same space you currently submit or publish.

Publish on a Facebook Page: Instead of inserting unrelated experiments into a space where you’ve established a given subject matter or stylistic focus, maybe you’ll post that political satire piece on a Facebook page.

Medium or Tumblr: You could launch a site on Medium or Tumblr for the sole purpose of giving you a dedicated home for these experimental pieces. They can be the platform where you launch your new ideas and stories into the world. They can provide the mechanism for interaction and response so you can gauge reactions.

You can try things out in these other spaces before making a big, long-term commitment.

Unlike P.T. Barnum, our writing experiments probably won’t risk everything we’ve built. They might feel that big, but chances are they will feel bigger inside us than they’ll appear to readers. So why not go ahead and experiment? Next time you’re deciding what to write next, take a risk.

Enter into it with an open mind and a playful spirit. If you think of it as fun, you’ll feel free to enjoy the entire process. Give yourself a break from taking yourself so seriously.

Author James Patterson likes to write in several different genres, and if you go to his website, you’ll see he has four photos of him with different “costumes.” Three of them are quite playful. He writes thrillers and middle grade novels and some other work, so he’s donned a pirate outfit for one shot and Groucho Marx glasses for another. Dress the part and write with a fun and playful attitude.

It’s Only an Experiment

If you maintain that your efforts are simply experimental, then rest assured: you’re simply trying things out, giving them a test run. You’re waiting to see how you feel about the results—both the finished product and how you feel about yourself as the writer throughout the process. And of course you’re trying to get a feel for how readers react and respond.

When you finish the experiment, you’re not locked in. You can be done with whatever you tried. Forever.

A Way to Decide What You Write Next

This may be the way to decide what to write next. Move outside your comfort zone toward the project that awakens interest and curiosity, the approach that will stretch and challenge you, the experiment that helps you discover untapped potential.