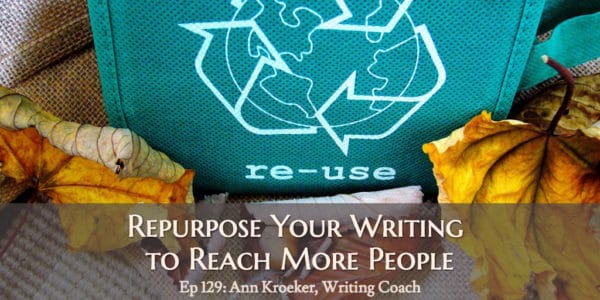 When experts recommend we post content on Facebook and on blogs and in newsletters and YouTube and all these places while we’re trying to write essays or articles or books, we can feel deflated and defeated. How on earth are we supposed to produce that much content?

It’s easy to just say, “Forget it. I can only write one thing at a time.”

Repurpose Your Writing to Connect with More People

I’m not super strategic, and I tend to write just one thing at at time, but I’m discovering ways to repurpose content in order to connect with more people in places like Facebook and on my blog and in newsletters.

What I’ve been doing most often is writing one solid piece—usually an article that’s available as a podcast episode, like this one. Then, if it seems workable, I repurpose it—that is, I repackage it in some way, or cut it down, or, if its short, I expand on it. The various versions head out to appropriate destinations often with slightly different audiences and purposes.

For example, about a month ago in my weekly newsletter, I described a trip I took to New York City with a client. It was my first-ever trip there, and because my sole purpose was publishing-related, I thought it might be interesting to my subscribers.

Then I realized, Hey, this could be an article at my website.

You may have noticed that articles at my website are also available as podcast episodes, so that story I wrote for subscribers ended up as an article and a podcast episode.

And then, on Instagram, I posted a photo of me standing in Times Square that did not appear in the article at my website or in the newsletter. Along with that photo, I posted a short story about the trip that was really similar to the original, but different. In other words, I didn’t write anything new; instead I tweaked the article, cutting some material and changing the focus a little bit, and published it there in Instagram. So far, it seems to be one of my most popular images.

I took one idea, spun it different ways and shared in different spaces for different people. That’s repurposing writing. Whether you start small and go big or start big and go small, this will save you time as you reach more people.

You can start with one little nugget of an idea—maybe a thought you had, or a quote you came across and posted on Twitter—and expand that one small nugget into a full-blown article, essay, or book chapter.

Or you could start with a full-blown, fully developed project and pare it down until you express it at its simplest core thought—perhaps as a quote—on Instagram, Facebook, or Twitter.

Let’s say you start with a quote you find. Here’s one I came across in my reading not too long ago:

Honor the world by observing it truly and writing about it with humility. (Walter Wangerin, Jr.)¹

That rang true to my ear…and my heart. So I shared it as-is on Instagram as the caption accompanying a photo of a leaf. I didn’t say more. I didn’t offer commentary, though I often do. I simply shared the line and the source for other writers to ponder.

"Honor the world by observing it truly and writing about it with humility." (Walter Wangerin, Jr.) . . (Wangerin, Walter. Beate Not the Poore Desk: A Writer to Young Writers. Nashville, TN: Rabbit Room Press, 2016. Print. p. 61)

I could just let that be what it is: a quote on Instagram. It doesn’t need to be more.

But I was looking at that quote a few days ago thinking about the concept of repurposing by expanding on it. I could illustrate its message with a story from my own life and my own attempts to honor the world with my true observations humbly expressed in words.

Case Study: How to Expand

I might think of a scene from my life.

Maybe I’d tell about my dad, the other day, when I joined him for a meeting at his long-term care facility. Every quarter, they gather several people—a person from nursing, food service, activities, and social work— and they discuss the care he’s receiving and updates on his health.

I could describe how Dad sipped at the coffee I’d gotten him in the lobby—how he pulled the Styrofoam cup close to his chest and tried to listen to each person’s update but struggled to hear or understand what they were saying.

The director of food service is tall, and Dad said he was a giant, taller than anyone he’d ever seen. The man kind of brushed it off. “You’re five-eleven,” he said to Dad. “I’m six-two. That’s not much taller than you.” And Dad nodded and smiled without saying anything, I suspect because he didn’t hear what the man said.

When the man finished his report on Dad’s diet, we thanked him. He nodded and stood up to leave, and as he strode toward the door, Dad pointed at him. “See? You didn’t believe me, but I told you he was tall. Look at that!” And the man walked out without looking back.

I could mention that Dad’s left hand shakes a little, maybe from a medication or maybe from something else. No one mentioned it during the meeting. I didn’t ask. But Dad was able to sip the coffee without spilling. 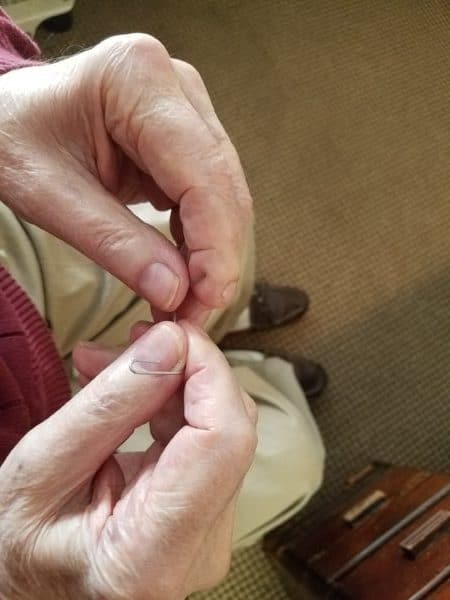 I typed notes while they talked. Sometimes the nurse would ask Dad something and he couldn’t hear. She’d repeat it a couple of times and he still couldn’t hear. So I’d type it out on the screen of my phone and hold it up for him, because he can read just fine.

He’d squint through his trifocals. “Oh!” Then he’d answer the best he could, sometimes following it with an unrelated story from his youth.

One story was about how he used to compose type on a Lynotype, which was a machine used years ago to set type for newspapers. Some guy he worked with typed out “beat them damn keys” into the text as a joke and it accidentally made it into the newspaper. 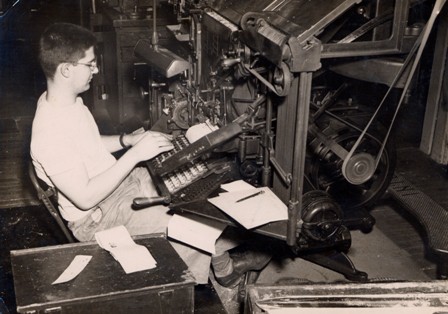 If this were part of the longer project I was writing from that Walter Wangerin Jr. quote, I might wrap it up similar to how the meeting itself wrapped up. After I thanked everyone for coming and they thanked me for being there. They said goodbye to my dad and left.

He and I sat in the quiet conference room a couple of minutes longer, sipping the last of our drinks, and Dad said he sure was glad I was there. “I don’t know what’s going on half the time,” he said. “I wouldn’t know what to ask, and I won’t remember that they said.”

I might end with another quote, this one from Thomas Lynch:

Witness and keep track. That’s the basic work of writers. 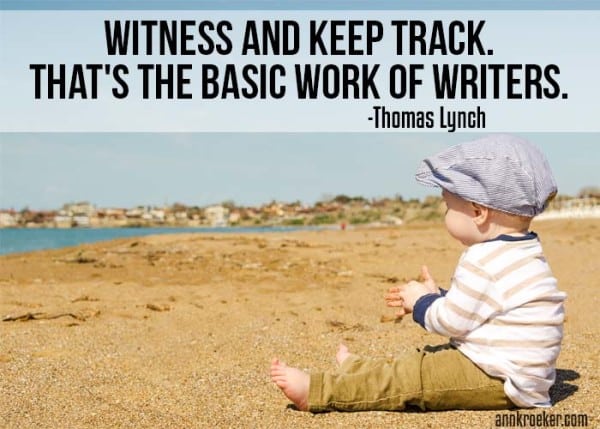 That’s just one example of how I could take that small thought—that small quote—and expand it into a more complex final product for a purpose more significant and personal than a quick social media update.

Start with a blog post from your archives and add further research and a series of action points presented as bullet points—and publish that as a new post with richer content.

Record some popular posts as audio or create a video version of one.

Maybe you find one post drawing a lot of interest or traffic. If so, consider composing a series of blog posts on the same theme and assemble them into a short e-book.

If the e-book draws interest, write several that fall under an even broader umbrella topic, then merge and rework them to become a nonfiction book. It’s not the traditional path to writing a nonfiction book, but we’re in a new era of publishing. Why not try?

And of course we can always take an interview or personal story or research on a topic and write articles and essays with a different audience or slant. This is another way to repurpose our writing.

For example, if I wanted to write about how caregivers advocate for family, I could launch with my story about Dad’s meeting and then integrate other people’s experiences of needing to advocate—maybe someone would have a story of how their attentiveness as a caregiver saved their loved one’s life.

Or I could use that same scene at the care meeting for Dad to talk about father-daughter relationships and pitch it to a women’s magazine or submit it as an essay.

That scene could be written as a poem, as well.

Those are ideas for how we can go from something small and see it grow to something big.

But we can go the other direction, from big to small.

This is much easier and more obvious. If you’ve done the work of developing an idea, you can easily imagine how to go the other direction and pare it down, pluck a sound byte or tweetable segment, and shoot it out into social media.

That’s really all it takes. Create with intention your fully developed concept, and pull from it excerpts for other purposes, audiences, and destinations. A short thought plucked from a blog post or article can accompany a visual on Facebook or Instagram; a snippet can be tweeted.

Link back to the original if you wish, or just let it stand on its own in this new space. People will argue me on this and urge you to send followers back to your website and offer something for people to sign up for your email list. That’s a smart idea—strategic.

But right now I’m just hoping to free you from the burden of reinventing the wheel every time you sit at the keyboard.

Big to small, small to big. One’s not better than the other—just try it. Repurpose your writing to reach more people and have more fun. 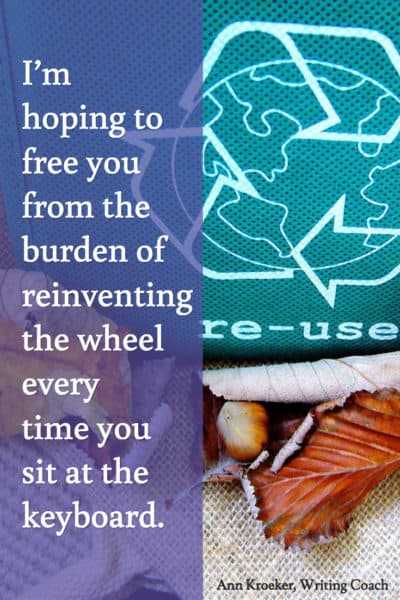