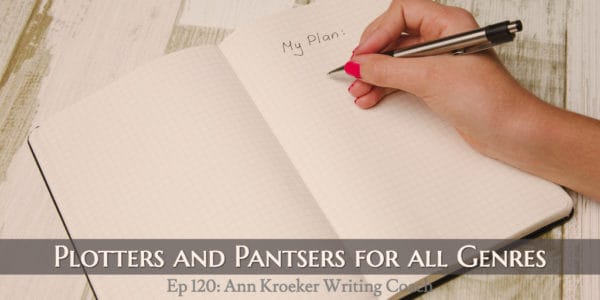 In fiction writing, we refer to plotters and pantsers: those who like to outline their plot and write in an organized manner, the “plotters”; and those who write-by-the-seat-of-their-pants, the “pantsers.”

Each approach reflects when and how you do your thinking.

I know every writer has specifics to his or her approach, but here’s the general idea.

The plotter is imagining his characters and thinking through their struggles up front, before he writes a single word, planning out the story’s plot.

The pantser has a basic idea and a main character or two, tosses them into a setting, gives them a problem, and starts writing—because he’s thinking as he writes and the story unfolds before him.

While nonfiction writers and poets don’t technically have to plot out anything, I suspect writers in all genres can identify with one or the other of those general approaches.

Maybe you’re a plotter-type who outlines essays and articles or works from a template for blog posts. You refer to that outline and fill out the template before tapping out the draft.

You probably started with a list of topics or a mind map to think, and then figured out how to organize all those ideas that popped into your head. Only then—only after you organized the themes, subtopics, and examples, shaping them into some kind of structure—did you attempt to write a draft.

Maybe you’re a pantser, generating a big idea and then running with it, letting the subtopics reveal themselves while you write. You might make a short list to get the creative juices flowing, but then you just put pen to paper and started freewriting to unearth everything you can on a topic, trusting your mind to flow in some kind of logical pattern, finding connections and stirring up thoughts, quotes, and ideas you’ve tucked inside some mental file.

As with many things, however, this is not a binary choice; we’re probably not either a plotter or a pantser. I see it more as a continuum, where pantsers like to have an idea of where they’re headed or maybe they write plot summaries for the next segment they’re starting to work on.

And, yes, plotters will stay open to new ideas, willing to erase or rearrange ideas in the outline when some new thought arises or a bit of research sends them off in a new direction.

You might be amused to know that some people who see themselves somewhere in the middle of this continuum call themselves “plantsters” (or “plantsers”) a combination of both.

Which Way Do You Lean?

But even a plantser will tend to favor one end of the spectrum or the other. Figuring out which way you lean can help you do your work more confidently from day to day.

If you know you like to be a little more organized and prefer a sense of where you’re going before you write, you’re leaning at least a tad toward the plotter end and you’ll be able to write drafts with greater ease when you’re prepared. That’s cool. Don’t let someone who leans toward the pantser side tell you that’s uncreative or uninspired. You’re being creative at the beginning of the process instead of the middle of it.

If you’re a little more loose about where you’re going, eager to explore your idea or characters as you write, don’t let the person who relies on an outline look down on you. You have to find your way as you go—it’s writing as discovery. If you’re a little more on the pantser side, you’re letting your thoughts and ideas evolve through the writing process.

No Right Way to Write

Plotters look down on pantsers for being unorganized and undisciplined. “Poor things. They’re wasting so much time! They’ll be doing so much more work during the editing phase!”

Then pantsers criticize plotters for being too rigid and closed-off to new ideas, forcing characters or ideas to fit into their pre-decided plan. “They’re so rigid, they leave no room for magic!”

Know the Strengths and Weaknesses of Both

Whichever approach is more comfortable for you is the one that’s right for you. Each has strengths and weaknesses.

When you recognize that, you can confidently continue your work without letting the story of a disciplined writer who outlines his essays make you feel bad for sitting down and writing from a prompt to see where your mind takes you.

And when you admit weaknesses in your preferred approach, you can build in time to accommodate some step that’s missing—if you’re a pantser, for example, maybe you build in extra time for the editing phase because you’ll have to shave off stories that don’t truly support the main idea that emerged as you wrote. If you’re a plotter, you might have to hold off on the excitement of actually writing because you know you need to devote more time to the project up front.

Knowing strengths and weaknesses helps you plan and organize your time and the project itself.

And knowing strengths and weaknesses helps you encourage and support writers who work differently than you.

Do pantsers add more energy and life by letting inspiration carry them this way and that? Maybe.

Here’s an idea: How about you change things up for a day? If you lean toward the plotter end of things, preferring an organized plan up front, try freewriting your next project. See if your mind takes you in unexpected directions.

If you’re more of a pantser, try doing some of your thinking in advance. Make a list or a mind map to corral the ideas that tend to spill out, then organize those elements into a structure and write the complete piece following that plan.

Maybe you’ll move a little further over on the continuum after the experiment.

Or maybe you’ll confirm you’re in the right spot and don’t need or want to change.

Or maybe you’ll discover a new tool that you can turn to on a day when you need a change of pace, when the words come more slowly. By appreciating how the other end of the spectrum works, you can borrow their strengths and gain a little traction on something that’s stalled.

Trying the opposite approach for a day or two is a way to keep you curious, creative, and productive. And that’s a recipe for a rich writing life. Plotter, pantser, or plantser—there’s nor right or wrong. Find the approach that fits you best on any given day.