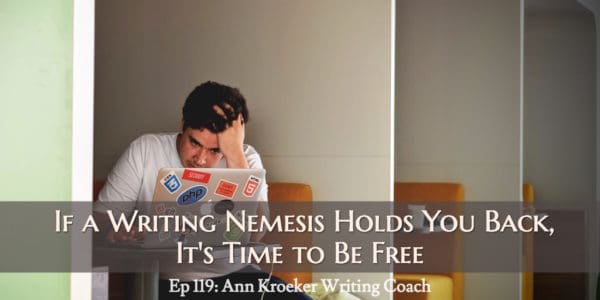 In Rumors of Water, L.L. Barkat recommends a book to her daughter. Barkat is out in the garden with her girls, who are pulling weeds, and one of the girls, Sara, has decided she hates Bishop’s Weed.

Barkat tells Sara, “It’s your nemesis…Every gardener has a nemesis.” She continues with her own reflection on the impact of having a nemesis—a garden nemesis or otherwise:

It’s not going to cause psychological distress and end up in her memoirs. But it’s not going to go away either. She’s going to need to work around it, dig it out, ignore it, accept it, if she wants to grow lettuce and peas in this garden bed. (41)

She recommends to Sara a book by Michael Pollan that has a nemesis—maybe a gopher. I, being rather lowbrow, thought of Caddyshack instead of Michael Pollan, and then of Seinfeld and Newman:

You probably don’t have a Newman in your life. In fact, I hope you don’t have any actual nemesis—that is, a flesh-and-blood writer who steals your ideas or steals your thunder.

But Barkat suspects every writer does indeed have some kind of nemesis. Maybe it’s The Censor, she says, “a prohibitive voice,” or The Market, “always demanding writing that’s saleable.” Maybe it’s The Procrastinator, which is “keeping us from writing.”

In his book The War of Art and Do the Work and countless articles and interviews, author Steven Pressfield presents the idea of Resistance. It’s his way of talking about a nemesis.

Resistance is the root of all manner of evil and issues, as it includes trouble like fear, self-doubt, distraction, timidity, self-loathing, ego, and perfectionism—any force working against us and our creative efforts. Resistance is an enemy, a nemesis. Pressfield practically personifies it by capitalizing the word Resistance when he writes about it.

What hisses at you when you sit down to write? What threatens to grind you to a halt, causing Resistance to your creative work?

You’ve got to know your enemy…name it if you can. That’s a good first step in order to fight back and be free.

You might already know your nemesis. You may have identified it long ago and immediately blurted it out the minute I asked the question “What’s your nemesis?” It’s procrastination! It’s jealousy! It’s fear of success! It’s fear of failure!

If you know, write it down. Knowing it—and naming it—can help you recognize it when it knocks at the door, blusters into your writing space, and sits there staring, glaring, boring a hole in your confidence.

If you don’t know

If you don’t know your nemesis, it’s time to explore.

L.L. Barkat sends writers off with a bit more instruction. She recommends working through a book like The Artist’s Way to explore what’s hindering us. She also recommends studying other writers’ processes to hopefully see ourselves more clearly and pay attention to “our frustrations and our joys with writing” (42).

Once you know it and name it, how can you be free of it?

How to Be Free of a Nemesis

If your nemesis is fear, Elizabeth Gilbert has quite a bit to say. In talking about the kinds of fears that keep us from our creative work, she says, “Your fear should always be allowed to have a voice, and a seat in the vehicle of your life. But whatever you do — don’t let your fear DRIVE.”

She also recommends letting that fear write a letter to you. In a Facebook update a year or so ago, she recommended we ask fear what it wants, what it doesn’t want, and why it’s holding us back.

And then, after “fear” writes that letter, read it, she says, with an open mind and heart. And then she says we should write back to it. Make sure that this fear understands you have a new plan—one in which fear cannot touch the steering wheel.

Focus on the Dream

Steven Pressfield suggests that we overcome Resistance by identifying the dream that may have stirred up Resistance in the first place.

What dream is Resistance trying to keep unformed and unrealized? Focus on the dream instead of the Resistance and, as the writer doing the work, “bring it into realization.” It doesn’t stop the noisy voices forever—we’ll open the door and face our nemesis again. But we’ll know it when we see it or hear it, and be free. We’ll defy it by sitting down to write.

If it’s a weed, dig it out. If it’s an enemy come knocking, shut the door. If it’s a voice that taunts or a fear that holds you back, ignore it. Despite the distraction and discouragement, you must drive the car. You must do the work.

Do the work, and be free. 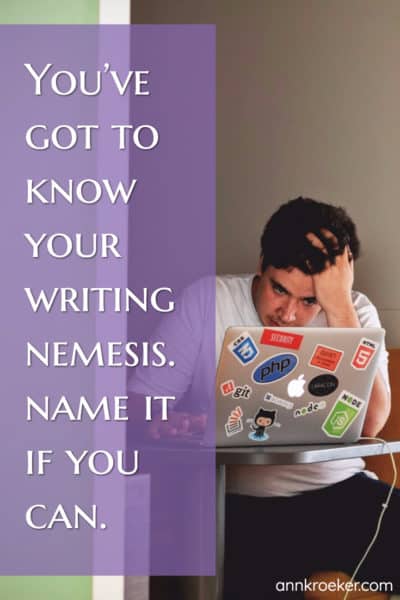