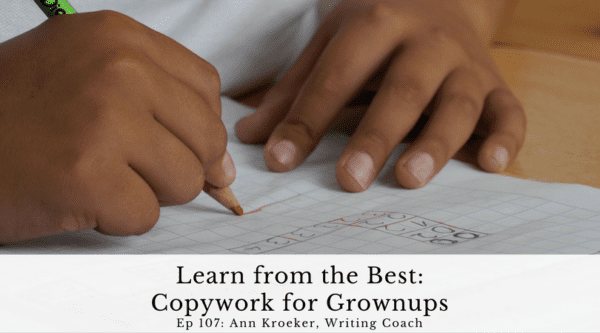 Children used to be assigned copywork so they could practice penmanship and be exposed to great poetry, sayings, and passages from literature. But copywork’s not just for kids.

You may recall from Episode 106 that Ben Franklin’s method is similar to copywork: He picked an essay or article he read and admired, took a few notes on each sentence—just a word or two—set aside the original, and some time later tried to recreate the original using the hints he had written down. Like I said, it isn’t exactly the same as copywork, but it’s close.

Copywork is more meticulous than that. Like the scribes of old, a person devoted to copywork seeks to create an identical copy of the original text—an exact replicate.

Why bother with copywork?

You may ask, why would any ambitious, 21st-century adult writer bother with copywork?

It may seem like a childish activity. Why revert to past-century elementary-school training when we’re adults seeking to produce a creative, contemporary body of work?

Well, one advantage is that copywork forces close reading—it requires attentiveness to avoid skipping a word, missing a comma, or losing our place. That attentiveness is key to understanding a writer’s decisions. Francine Prose says in Reading Like a Writer:

Every page was once a blank page, just as every word that appears on it now was not always there, but instead reflects the final result of countless large and small deliberations. All the elements of good writing depend on the writer’s skill in choosing one word instead of another. And what grabs and keeps our interest has everything to do with those choices. (16)

As a writer, then, we’re making decisions with each word choice, each exclamation point, each series of three phrases that produces the rhythm we want to achieve. We can pick up some of this simply by reading, as Prose herself does. She says, “I read closely, word by word, sentence by sentence, pondering each deceptively minor decision the writer had made” (3).

But when we copy out someone’s work, it’s even better, closer—we don’t miss a thing. We see it all, each and every decision, as it emerges in our writing notebook. Copywork documents the work of another writer so that the copyist is naturally, organically mentored by the original author.

Prose points out that close attention to a text offers “the excitement of approaching, as nearly as you can hope to come, the hand and mind of the artist. It’s something like the way you experience a master painting, a Rembrandt or a Velasquez, by viewing it from not only far away but also up close, in order to see the brushstrokes” (30). 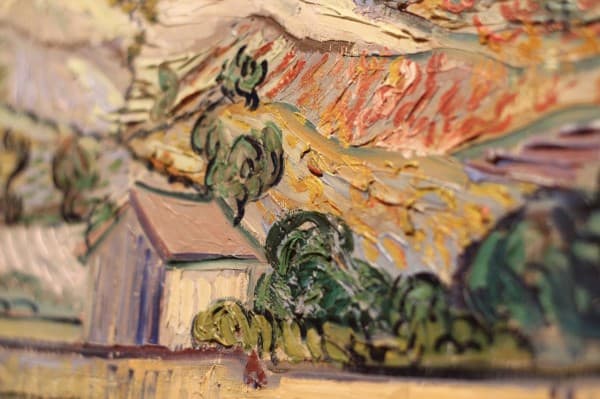 By copying out the text, we’re practically holding the pen of the author, forming letters as if we’re tracing the originals, to learn. That’s the goal: to learn.

Who bothers with copywork?

A website called The Art of Manliness claims that several well-known authors practiced copywork. They mention Jack London, who trained himself to be a better writer by copying out passages from Rudyard Kipling’s work. They report:

For hours at a time, and days on end, he would make it his assignment to copy page after page of Kipling’s works in longhand. Through such feverish effort, he hoped to absorb his hero’s rhythmic musicality and energetic cadence, along with the master’s ability to produce what one contemporary critic called “throat-grabbing phrase.”

They quote London as saying:

As to myself, there is no end of Kipling in my work. I have even quoted him. I would never possibly have written anywhere near the way I did had Kipling never been. True, true, every bit of it.

Self-taught by copying out the words of a writer he admired, London found his own voice and his own place in history.

You can take copywork to the next level following Robert Louis Stevenson’s method, which was similar to Ben Franklin’s, but more strict. It required a quick memory. He’d find a passage and read it twice, carefully. The Art of Manliness explains:

He’d then turn over the passage and try to reproduce it from memory — word for word and punctuation mark for punctuation mark. At first the exercise was a tremendous struggle and his attempted copies were riddled with errors. But with practice, he was able to read huge passages and reproduce them from memory with exactitude. He continued the practice even after he became a literary success.

Read, remember, and write it out. It’s copywork from memory.

When you’re reading books, articles, essays, and studies related to your work, you’ll likely encounter interesting excerpts and ideas that you’d like to save. Those words might make their way into something you write later, so you copy them exactly and take note of the source information and page numbers right then and there for proper attribution.

Writing out a passage, phrase, or sentence in a notebook or on a note card helps lock it in our minds. When we encounter related material elsewhere, we can recall those snippets and quotes and find threads tying them together. Those connections are vital as we develop our own ideas. Would we make those connections had we skipped the step of copying out the content? Maybe. Maybe not.

Ryan Holiday and his mentor Robert Greene have a note-taking system that Holiday describes at length at his website. To learn more, you can read his explanation (you can see photos, too, of his storage system), but he basically writes out on 4×6 cards all kinds of quotes and excerpts that strike him as he reads. He then groups them by theme or category—usually a topic related to a project he’s working on.

I’ve shared his method with several clients and friends, and they love the approach. And I love any system that captures and organizes my research in an accessible way. Copywork is a researcher’s essential tool.

On SmartBlogger, Greg Digneo tells the story of Dan Kennedy, who as a student was looking for an internship and ended up being sent to a businessman who needed help with direct marketing. The businessman was named Gary Halbert. Digneo claims Halbert was “arguably the greatest living copywriter at the time.”

Dan arrived, saw other employees at work, found himself impressed with the business, and told Gary Halbert, “I want to do what you do.”

Gary handed Dan a pile of sales letters 2 feet thick and told him: “Copy each of these letters by hand. And when you’re done, copy them again.”

It took two years for Dan to finish his assignment.

But did it work?

Today, if you want to hire Dan Kennedy to write a sales letter for you, it’ll cost you $100,000 up front plus a commission on each sale you make.

You can apply this to any kind of writing you want to master. Look for the best of the best and learn techniques from them. Learn to write sonnets by copying out outstanding classic sonnets by hand. Do the same with a short story you like—the best out there—or an essay. You won’t want to plagiarize, as we talked about in episode 106, but we do want to learn.

You may recall this quote by Francine Prose, which I included in the last article:

After I’ve written an essay in which I’ve quoted at length from great writers, so that I’ve had to copy out long passages of their work, I’ve noticed that my own work becomes, however briefly, just a little more fluent. (3)

Gain confidence and fluency—become a better writer—by copying the work of others.

It’s a simple, free way writers of all ages and at all stages can improve their skills. Let the original texts show you how it’s done. All you need to get started is a notebook, an inspiring text, a pen, and time. 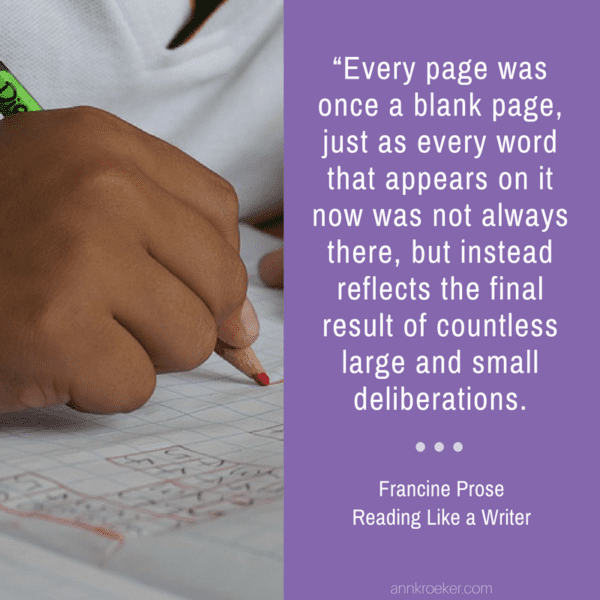