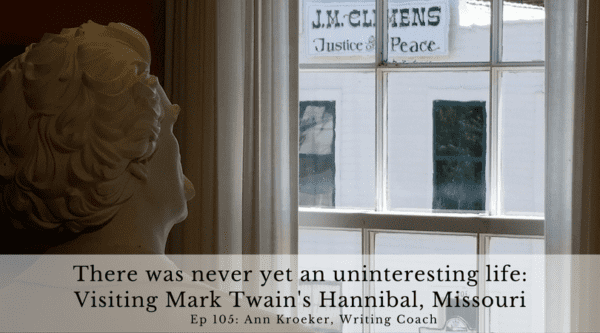 We stepped inside the cave entrance and followed our guide down narrow passageways to see its wonders. The Mark Twain Cave, a national landmark just outside Hannibal, Missouri, was the cave Samuel Langhorne Clemens explored in his youth and used as inspiration for the cave featured in The Adventures of Tom Sawyer when Tom Sawyer and Becky Thatcher separate from the group that had scampered up the hill to play hide-and-seek inside. 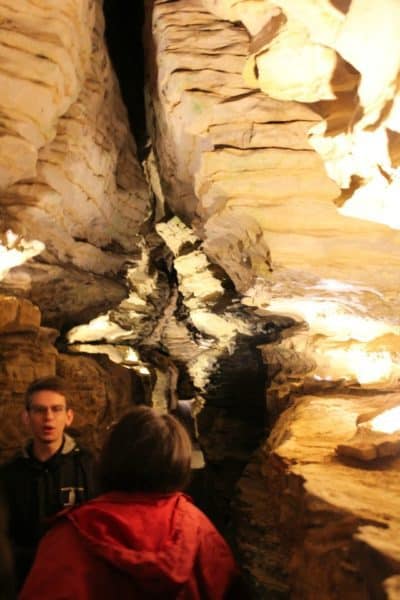 Our guide kept us moving along a corridor coined Grand Avenue, shining his flashlight down side passages to give us a glimpse of areas we weren’t allowed to explore. We could see how easy it would be to get turned around and lost, especially if we were like Tom and Becky, carrying candles when a hundred bats flocked down, darted at the light, and struck out the flame with their wings.

We heard that Jesse James used this cave as a hideout and signed his name on the wall, as did thousands of other visitors. We saw the signatures dating back to the 1800s, when tourists smoked their names onto the cave’s ledges and walls.

In the book, Clemens describes “a place where a little stream of water, trickling over a ledge and carrying a limestone sediment with it, had, in the slow-dragging ages, formed a laced and ruffled Niagara in gleaming and imperishable stone.” We saw that. 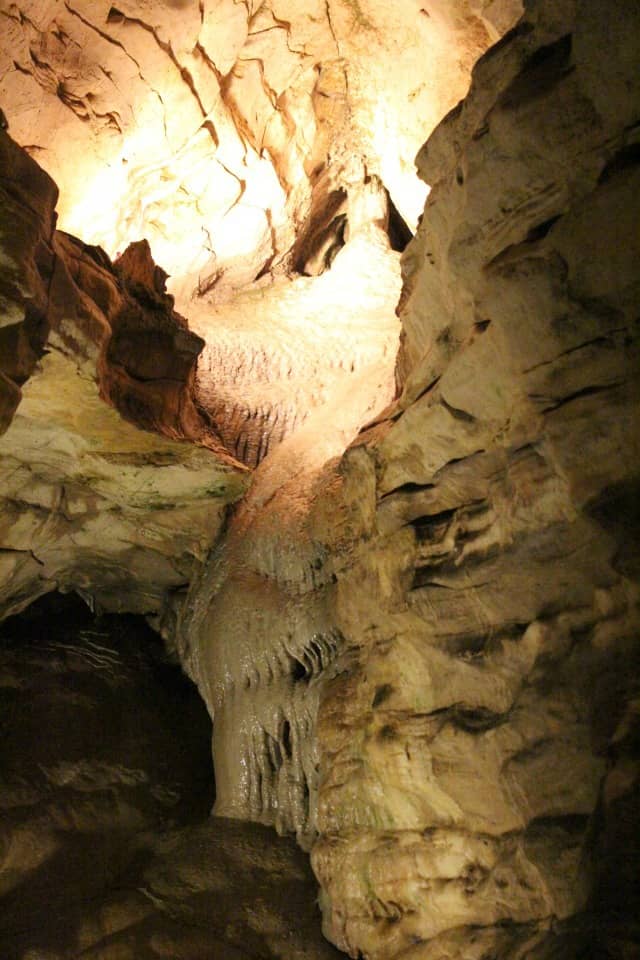 He mentioned “rather over-descriptive names” of the cave’s features, one of which was “Aladdin’s Palace,” and we saw that, too, with its curvy opening revealing a pool of water. 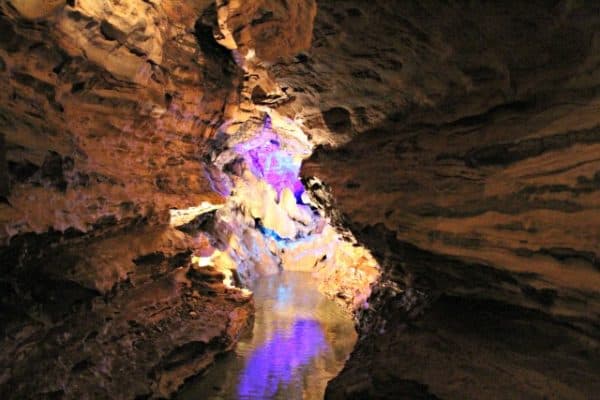 After the cave tour, we drove into town and stopped for coffee in an old building on Main Street, where we could look up and see the big sign for the Mark Twain Hotel. Just a block or so away, we walked to the edge of the river where the Mark Twain Riverboat awaited tourists, near a park next to the railroad tracks.

We toured the Mark Twain Boyhood Home on Hill Street—next to it stood a fence like the one Tom Sawyer’s friends paid to have the privilege of whitewashing. 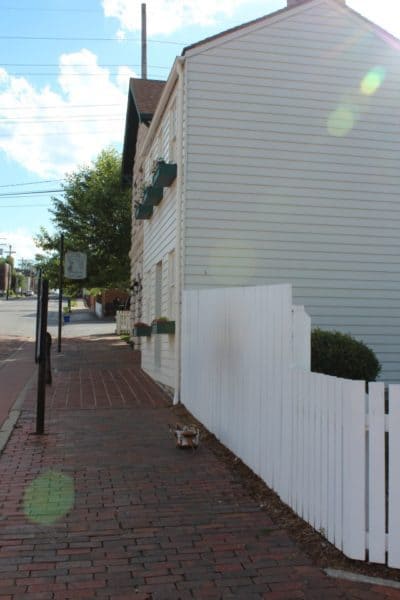 Across from his home is the Becky Thatcher House, where a girl named Laura lived, who served as the model for Becky. Next to that was the office of Judge Clemens, Justice of the Peace. Behind the houses, we stepped through a white shack reconstructed to represent Tom Blankenship’s home—Huckleberry Finn is based on this Tom.

These were the places Samuel Clemens knew best during his formative years. The town of Hannibal is where he learned to read and write. It’s where he collected sights, sounds, and smells. It’s where he met and got to know people who would populate his books as fictionalized versions of themselves. 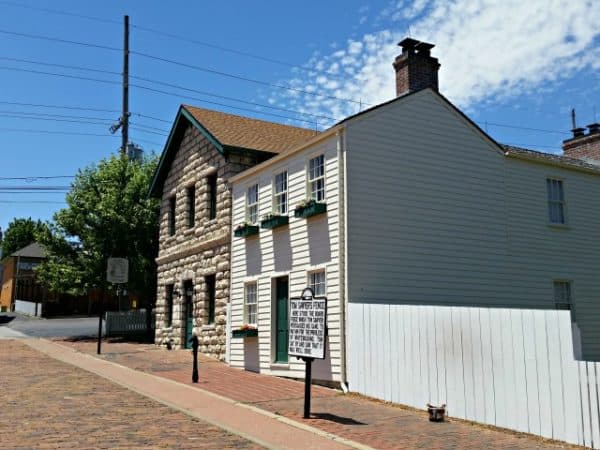 The rooms in the Clemens’ humble home on Hill Street feature life-size figures of the author, unpainted, posed as a sort of ghost-like presence in each space. Posters display quotes from Twain’s work. In a bedroom, the Mark Twain figure stands at a window and looks out at the town, and on the accompanying poster is an excerpt from Life on the Mississippi:

After all these years I can picture [it] just as it was then: the white town drowsing in the sunshine of a summer’s morning…one or two clerks sitting in front of [the] stores, with their splint-bottomed chairs tilted back against the wall…hats slouched over their faces, asleep,…a sow and a litter of pigs loafing along the sidewalk,…two or three lonely little freight piles scattered around the ‘levee’…[and] the great Mississippi, the majestic, the magnificent Mississippi, rolling its mile-wide tide along, shining in the sun…. 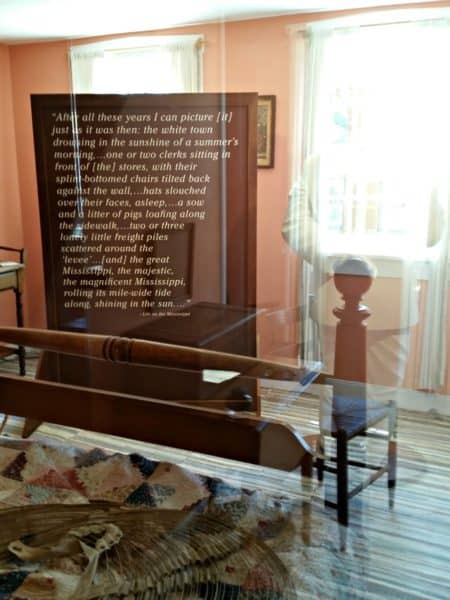 For two days, I was in his world, walking the streets Mark Twain walked, climbing the stairs of his home, looking out at the mighty Mississippi, and as I thought of his childhood I was moved once more by the mystery of time and memory. As an adult, Twain could picture Hannibal as it was in his childhood, “drowsing in the sunshine of a summer’s morning.”

I read Mark Twain’s recollection of Hannibal while looking at the town myself, and just steps away from his house the majestic, the magnificent Mississippi still flows, it still rolls along, shining in the sun. 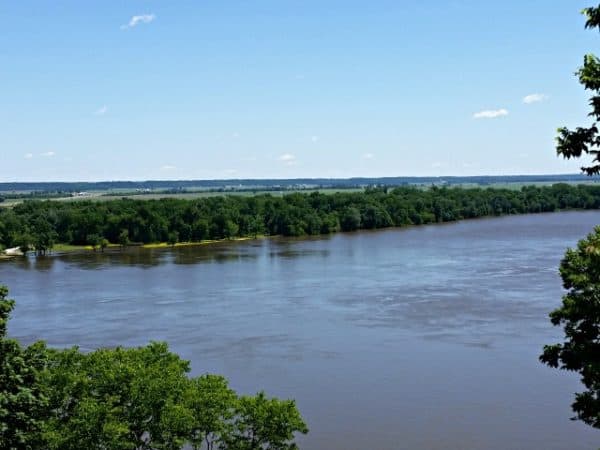 Lovers Leap is a bluff overlooking the town and river—one of the few things not named after Mark Twain. Up there, it’s easy to see how tiny the town of Hannibal really is. It may be small, but it provided Mark Twain with enough information to last him the rest of his days. He traveled extensively as an adult, but the books of his that we think of first—the ones many of us have read and discussed in our own childhood—are those drawing from his years in Hannibal, Missouri. 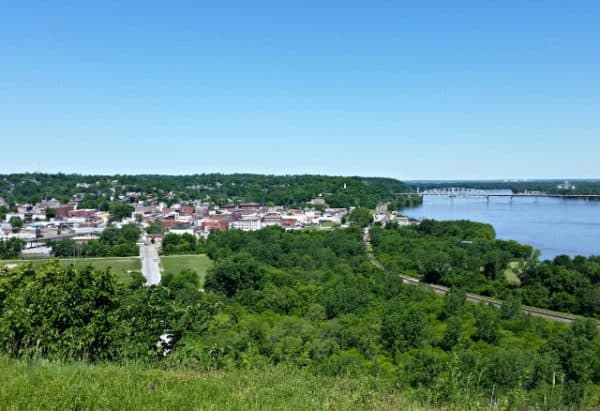 You may feel like your life is small and your experiences limited—you may wonder what stories you might tell, what books you might write, with so little to draw from. But if you survived childhood, you have enough information about life to last you the rest of your days.

Think back to the cave of your youth, the town or countryside you explored as a child, the stores you visited, the coach who inspired you, the teacher who scolded you, and the friend who bailed you out of a sticky situation. What might you mine for your own work, as Mark Twain did for his? 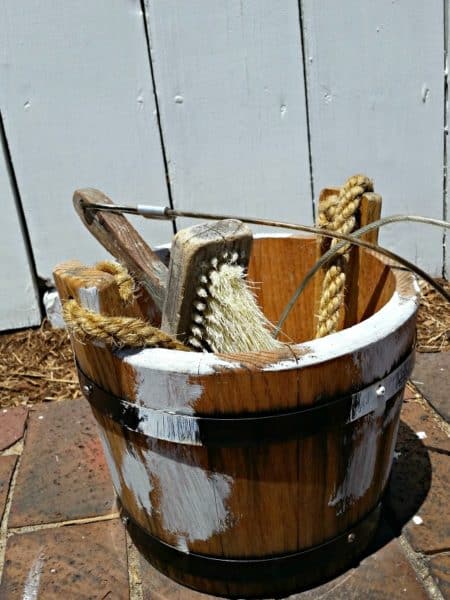 In the kitchen of the Mark Twain Boyhood Home, the figure of Mark Twain stands next to a poster. He’s shoved his hands in his pockets and looks up and out toward the visitor. Next to him are words from his notebook: “A man’s experiences of life are a book. There was never yet an uninteresting life. Such a thing is an impossibility. Inside of the dullest exterior there is a drama, a comedy, and a tragedy” (Mark Twain’s notebook and “The Refuge of the Derelicts”). 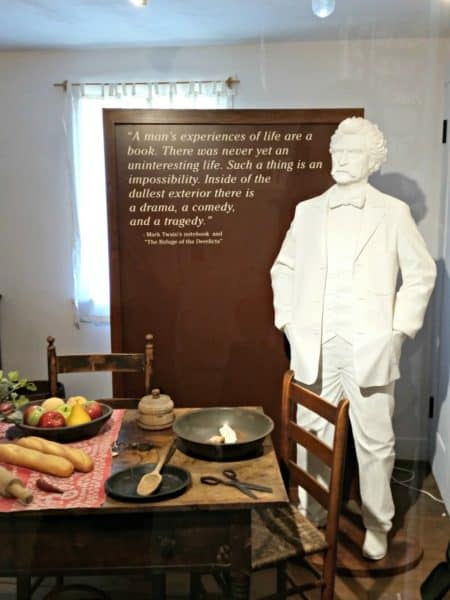 There was never yet an uninteresting life—you and I have stories to tell. Follow the passageways of the past, get lost for a while exploring the wonders within, lift up a candle and see what’s written on the walls. Think back, and remember those experiences of life. They are a book. And I think when we move past the surface, we’ll find we have all we need to write our lives. 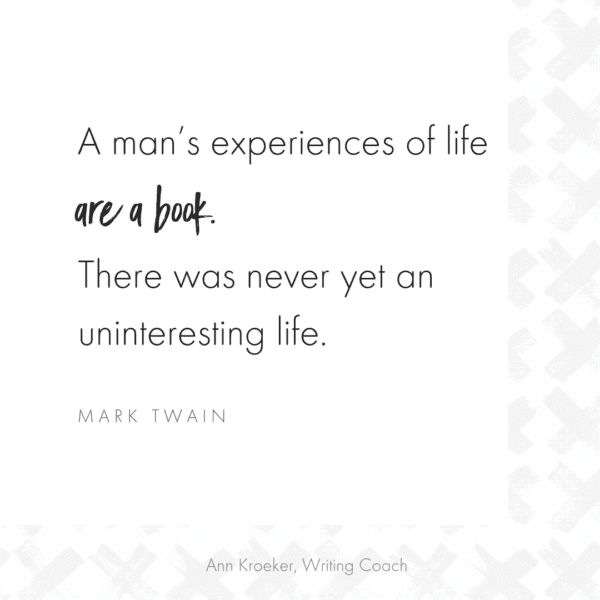