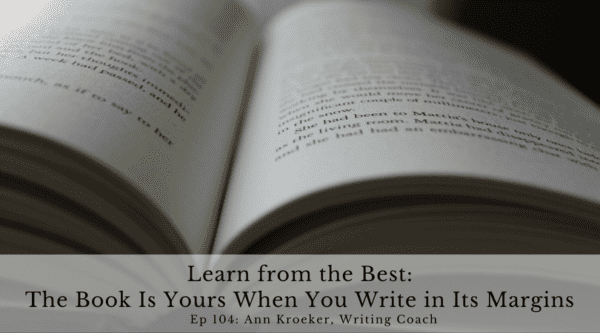 “If you want to be a writer, you must do two things above all others: read a lot and write a lot.” ~ Stephen King

You’ll hear that advice a lot. You want to write? Read a lot and write a lot. Simple as that.

But is it that simple?

Do we simply open the book, read and enjoy the story or helpful ideas, and automatically absorb the content? Or do we need to read with a plan or a strategy of some kind?

Is there a way to take in and retain the content, be inspired by the style, and learn methods to apply to our own work?

Is there a writerly way to read?

I think there is. So do many others. Let’s start with the content. How do we grasp it, absorb it, retain it?

Plagued by Lack of Retention?

Someone asked me the other day if I’d read Great Expectations. I had. I read it and remember enjoying it. But I couldn’t recall much detail at all. There’s Pip, right? And Miss Havisham sitting around in that ratty old wedding dress? That’s about all I could dredge up.

I’ve read lots of books—I was an English Major, for crying out loud! So I read and wrote response papers about gobs of great literature, countless classics, over the course of my studies—but my recall?

After years of academic effort, it feels like only shadowy memories flit across my mind for many titles I was assigned, maybe a scene or an interaction between characters—that tattered old wedding dress of Miss Havisham’s, for example. I wish more works were locked in in their full glory, the plot, themes, and characters remembered more accurately, beginning to end.

Make a Book a Part of Yourself: Write in It

As a young adult, post-college, I encountered Mortimer Adler’s How to Read a Book written with Charles Van Doren and subtitled “The Classic Guide to Intelligent Reading.” Adler wrote:

Full ownership of a book only comes when you have made it a part of yourself, and the best way to make yourself a part of it—which comes to the same thing—is by writing in it. (49)

Full ownership of a book only comes when you have made it a part of yourself…and yourself a part of it.

How do we make it part of ourselves? You heard it. Adler insisted that to “own” a book, we must write in it. 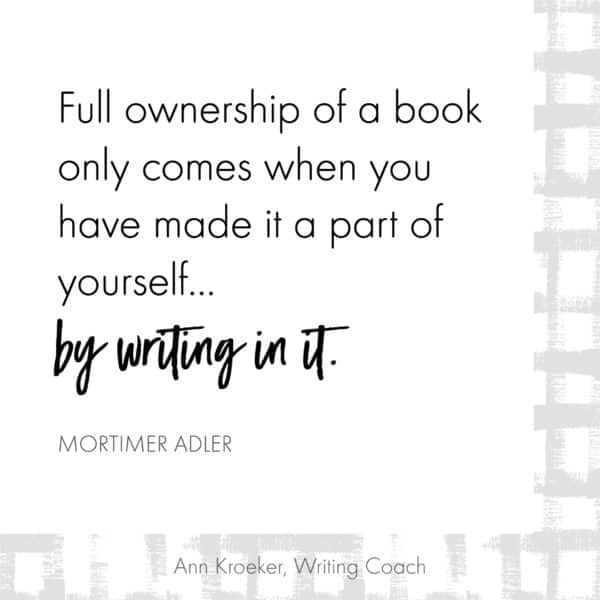 My parents never let me write in a book. The mere thought of marking a page was an abomination. Sacrilege. Verboten.

My parents love to read and have strong retention, yet they never marked up books, at least not that I saw. I had been taught what Anne Fadiman calls a “courtly love” of books. They insisted I treat the book itself—the printed book and its pages—with the utmost respect. Leave the pages clean and free of marks for your next reading or for someone else’s. Let them enjoy it without any marginalia to distract them. Our family’s books are pristine.

In Ex Libris, Confessions of a Common Reader, Fadiman explains the attitude of the courtly, Platonic love of books versus a carnal love of them:

The most permanent, and thus to the courtly lover the most terrible, thing one can leave in a book is one’s own words. Even I would never write in an encyclopedia (except perhaps with a No. 3 pencil, which I’d later erase). But I’ve been annotating novels and poems—transforming monologues into dialogues—ever since I learned to read. (Fadiman 41)

In college, I struggled to highlight and underline key passages and information, even though I could plainly see from the used textbooks I purchased that everyone did it. Eventually, I caved and with pencil lightly marked passages I thought I should note for tests and papers. Each time I underlined a passage or circled a word or wrote a comment or drew an arrow, I felt…naughty.

My first attempts at marginalia helped me read with closer attention and increased interest. My faint, shy marks documented my simplistic questions and chronicled my confusion; they reflected my admiration, disapproval, and occasional revelation.

By growing more confident with Adler’s idea that writing in a book was “a conversation between you and the author,” I as an adult was starting to analyze and absorb more personally the content I read. My marks meant I was interacting more boldly with the text and its author. The text mentored me, and of course, that means the author did, too.

Adler claimed, “Marking a book is literally an expression of your differences or your agreements with the author. It is the highest respect you can pay him.”

In time, as I grew more comfortable with Adler’s philosophy, I started marking up most of my books more boldly, shifting from pencil to pen (don’t tell my dad). It helped that I bought many of my books used…I still struggle to make the first marks on the crisp white pages of new books, especially in hardcovers.

Of course I never mark in a library book—instead, I used Post-Its to flag spots and mark keywords or ask questions. Then I transfer that information to a place like Evernote, typing out a word, line, or paragraph, with my thought in brackets. Then I can use the search function later and find these great passages and excerpts for my projects.

And Kindle (presumably other e-readers, as well) makes it easy to highlight and add notes, so that’s a way of bringing Mortimer Adler’s ideas to the 21st Century, although digital marginalia is not nearly as charming as old school, analog, pen-on-paper in the margins. I don’t think it can even be called “marginalia” in any literal sense. But I digress. The point is that I’m still interacting and engaging with the content, even digitally.

Be a Better Reader

If we are to read—and thus become a better writer—we’ll read closely to grasp and retain the meaning of a book, potentially incorporating some of its ideas into our projects if they have been integrated into our very lives. A tried and true way to integrate a book into our lives—the surefire way to “own” a book—is to mark it up with meaningful notes, or be one who practices “marginalia.”

An article in The New Yorker entitled “The Marginal Obsession with Marginalia” launched with this quote from Edgar Allan Poe:

In getting my books…I have always been solicitous of an ample margin; this is not so much through any love of the thing in itself, however agreeable, as for the facility it affords me of penciling in suggested thoughts, agreements, and differences of opinion, or brief critical comments in general.

Let’s follow the example of Poe and countless others, including Mark Twain, Sylvia Plath, Jane Austen, and Sir Isaac Newton.

Grab a pen—or at least a pencil—and start marking up those pages. Let’s be better writers by being better readers. And let’s own our books.