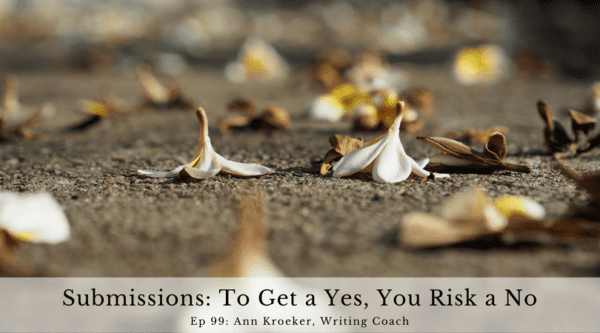 You’ve written something, edited it, polished it, and decided to send it out. Depending on your project, you’ll be shipping it off to a literary journal, magazine, agent, or publishing house. When you do, you risk rejection.

You’ve probably heard about Stephen King’s rejections from his book On Writing. He says, “By the time I was fourteen…the nail in my wall would no longer support the weight of the rejection slips impaled upon it” (29).

You Must Risk a No to Get a Yes

Rejection is part of the process of writing and submitting our work.

Nicole Rollender says she’s gotten to know several poets through social media, and when she congratulated one of these writers on her full-length acceptance, the poet told Rollender “it had taken her five years and 80 rejections to get her acceptance.” Most people aren’t posting about their rejections, Rollender observes, so this story can remind us that “behind every acceptance are a lot of rejections.”

Lacerations of the Soul

But I won’t lie to you—rejections hurt. I’ve heard “No,” and it stings. Rejections mess with your mind. They awaken the voices that taunt us, questioning our right to write.

When you get that first response back, and it’s a rejection…you’ll have to fight the temptation to draw an extreme conclusion. Some new writers and sensitive writers feel that sting and think, “Why did I ever think I could write?”

Isaac Asimov expresses the pain a rejection delivers this way: “Rejections slips, or form letters, however tactfully phrased, are lacerations of the soul, if not quite inventions of the devil – but there is no way around them.”

Sylvia Plath offers an alternative view. She wrote, “I love my rejection slips. They show me I try.”

If you want to get published, try. And keep trying. Keep writing and sending out your work. And when you get a rejection slip, tell yourself this:

“One editor at one publication doesn’t want this one piece on this one day.”

That’s all it means.

Believe that. Then you can walk through a rejection ritual, which we’ll talk about in more detail next time.

After that, the next step will be a little different depending on whether you’re working on a book proposal, a magazine article pitch, or an essay for literary journals. If you’re an essayist, you could revisit your piece and see if it needs revising—maybe have someone else take a look at it, too. Make any changes you deem necessary, then send it out to the next journal on your list.

When you know in advance that you will receive rejections, you can deal with them a least a little more rationally. Knowledge of the inevitable won’t make the rejections any easier, but at least they won’t take you by surprise.

The only way to avoid rejection completely is to stuff your work in a drawer or let it languish in a digital file, and never, ever send it out.

Or you could get in the game. You could start sending out your work and learn and grow. You’ll get more experienced writing cover letters and researching literary journals or magazines.

Rollender pointed out that “[i]f a journal receives 1,500 submissions of five poems a year, and they have 80 poem slots in their four annual issues, that’s 80 out of 7,500 poems. So a rejection” she says, “isn’t a referendum on your work.” Again, it simply means that one editor at one publication doesn’t want this one piece on this one day.

Increase Your Rate of Submission

An article in the September 2016 issue of The Writer magazine presented stats on the rate of acceptance based on number of submissions to literary journals. Author Keysha Whitaker tracked her submissions and at the time she started calculating, she was getting submissions at a rate of 10 percent.

She started asking other writers their rates, and most of them had never calculated it. The first woman she asked had a 9 percent rate. Another person came in at 4.9 percent, and that writer’s rate rose when she grew more consistent with the process.

Whitaker reached out to Duotrope, which looked at data from all subscribers and reported the average rate of acceptance to be 5.087 percent.

So the numbers say send out your work—lots of work. Step into it. Go all out.

In fact, you could focus on the rejection slips as your measuring stick instead of your acceptances. Set a Big, Hairy, Audacious rejection Goal instead of an acceptance goal, and see what happens. Make a game of it!

That’s what Kim Liao does. She aims for 100 rejections a year.

Early in her writing life, she asked a friend who was experiencing great success if she had a secret. The friend told her, “Collect rejections. Set rejection goals. I know someone who shoots for one hundred rejections in a year, because if you work that hard to get so many rejections, you’re sure to get a few acceptances, too.”

So Liao shot for 100 rejections. Her best result was a year with 43 rejections. She didn’t meet the 100 goal, but she did end up with five acceptances—a number that would have seemed unreachable if she’d focused on acceptance as the goal. It’s turned into a game. And it comes back to those numbers. Let the rate of acceptance remind you that you’ll increase your odds of acceptance by increasing your odds of rejection.

You can do it. Send out a lot of work and prepare for the worst as if it is your goal. Aim for 100 and then brace yourself. It’ll make you strong and you might have a little fun while you’re at it.

Liao is quick to add as a caveat that submissions are not required to be a writer. But if publication is your desire, you’ll have to submit your work. And when a publisher or editor rejects your pitch, your project, your proposal…it means you’re in the game. You’re trying. You’re taking the risk. You’re doing the work of a writer.

And if you’re willing to go so far as to embrace rejection, Liao said, “The great news is that in the writing life, there’s always something or someone new to get rejected by.”

Go out there, friend, and risk rejection. Risk a no…and you might just get a yes.