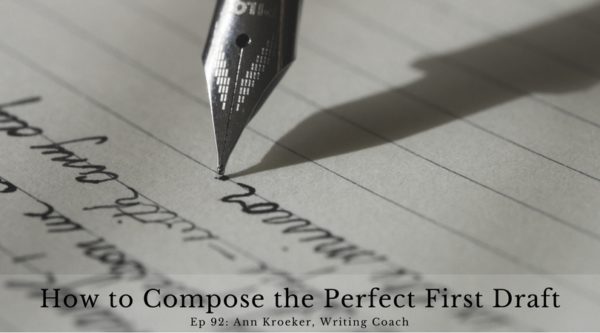 Before we revise, we need something to revise. We must compose the perfect first draft.

We write without worrying about every comma splice or misplaced modifier. We write with abandon and get the story down.

During the prewriting and creation stage, we must consciously separate the writer self from the editor self. It’s as if we need to wear two hats—literally two different hats you can wear at the appropriate times. In episode 91, I mentioned my literal editor hat: a Maxwell Perkins-style fedora.

The writer hat—especially needed during that first draft creation stage—is more like a baseball hat popped on backward. That image comes to me from Barbara Kingsolver, who wrote:

My muse wears a baseball cap, backward. The minute my daughter is on the school bus, he saunters up behind me with a bat slung over his shoulder and says oh so directly, “Okay, author lady, you’ve got six hours till that bus rolls back up the drive. You can sit down and write, now, or you can think about looking for a day job.” (High Tide in Tucson, 96)

Don’t stop the momentum and start fiddling with the words when knocking out that draft. Pop on the baseball cap as a reminder to keep the words flowing.

When that hat is on, we’re in a no-judgment zone, building the piece, keeping the creativity flowing, not second-guessing ourselves. Just get ‘er down and git ‘er done.

Another memorable source to turn to regarding first drafts is Anne Lamott. Countless writers have found freedom to write wild and free and without judgment thanks to a chapter in Bird by Bird (and I paraphrase), “Crummy First Drafts.”

“All good writers write them,” Lamott says. “This is how they end up with good second drafts and terrific third drafts” (21).

As readers, we see the final versions of books. We pluck them from library shelves and marvel at their quality, their genius, their lyrical style, their page-turning power.

We forget that every short story, poem, memoir, and novel started as an initial draft. Every writer had to get that first draft down—and that first draft was likely rambling, riddled with errors, and downright crummy.

Lamott gives another freeing image to take us into our project’s initial writing stage:

The first draft is the child’s draft, where you let it all pour out and then let it romp all over the place, knowing that no one is going to see it and that you can shape it later. You just let this childlike part of you channel whatever voices and visions come through and onto the page. If one of the characters wants to say, “Well, so what, Mr. Poopy Pants?,” you let her. No one is going to see it. (22-23)

When we write our draft like it’s child’s play—free and even fanciful—she says we may end up with one line in a paragraph buried deep on the sixth page…a line that captures our imagination, and perhaps our heart.

It’s a line “you just love,” she writes, “that is so beautiful or wild that you know what you’re supposed to be writing about, more or less, or in what direction you might go—but there was no way to get to this without first getting through the first five and a half pages” (23).

Quiet the voices and write without judgment, without fear, without hesitation. Like a child scribbling her story.

I’ve never been able to confirm the original source, but Jane Smiley is attributed as saying, “Every first draft is perfect because all the first draft has to do is exist. It’s perfect in its existence. The only way it could be imperfect would be to NOT exist.”

Don’t let perfectionism hold your words hostage when you’re working on that first draft. Let it all out. It’s perfect for what it is: the first draft.