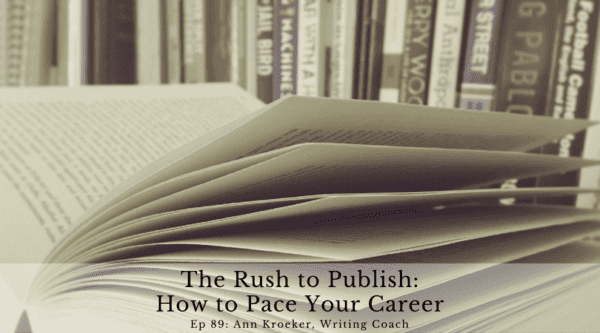 In chapter 7 of On Being a Writer, my coauthor Charity Singleton Craig highlighted what L.L. Barkat calls the “Fifteen Years of Writing for Your Grandmother Rule” (On Being a Writer, 86). Charity included this excerpt from Barkat’s book Rumors of Water:

It is not uncommon for writers to seek a large audience too early in their writing journeys. The idea of being published is a dream promoted by a cluttered market of writing books, writing conferences, and vanity publishers…. I love working with new writers but am often surprised at the desire they have to pursue a publishing dream when they haven’t yet put on a small-time cooking show, so to speak. (ibid, 86-87)

Charity goes on to explain the “small-time cooking show.” It was a little project Barkat’s daughter set up in their home—a cooking show she put on for her grandmother, “where she acted out her aspirations long before she’d ever attempt to be an actual chef.”

Just as her young daughter was logging hours as an amateur before going pro, L.L. Barkat herself reflected back on her “small-time cooking show” years, before she was a professional writer, when she would write letters to her own grandmother and “write book reviews for a local newsletter” (Rumors of Water, 107).

From Rumors of Water, Barkat says: “I’ve heard it said that most successful writers put in about fifteen years of small-audience writing before they begin to work with larger audiences” (ibid, 108).

Where are you staging a cooking show for your grandmother? How long have you been whipping up meals for just a few hungry patrons? What smaller audience is receiving your words as you learn your craft?

In episode 87, I encouraged you to consider creative ways to use social media to publish on a small scale or at least in short form—micro-form, if you will. When you share smaller pieces on smaller platforms for smaller audiences, you gain lots of advantages, like instant feedback and the fun of experimentation without such high stakes.

These are places to set up your cooking show. That is, you get to learn the craft and skill of writing with friends and family as your readers—your audience. You share your work with people who truly enjoy your stories, your ideas, your style. They look forward to the next piece you push out there on that small-scale stage.

Now, you may end up being one of the exceptions who can bypass the 15 years of small-scale writing and you may plunge directly into writing for larger audiences. It’s happening. Bloggers are getting book deals, and self-published authors are being picked up by agents and mainstream publishers.

But most of us put in our time. Most of us are showing up to write faithfully in smaller outlets for modest-sized audiences.

If that’s you, don’t rush your desire to publish. Find your small audience and set up your cooking show. Take joy in producing your best work on that stage. It’ll give you time to grow as a writer and help you solve problems and develop your voice in a more relaxed setting.

The Time to Learn

During this season of your writing life, you can create a self-study course, as I recommended in episode 88, and as you learn new techniques you can apply them in the next installment of your memoir published once a week on Facebook. You can improve your use of dialogue in the short story you’re tossing out scene by scene on Instagram. You can try a cinquain or haiku on Twitter.

Don’t try to speed up the process too much. During this era, you’re growing your audience and, more importantly, you’re growing as a writer. One day you’ll publish something for a larger venue with a larger audience.

You will have waited until the timing is right—you’ll have put in your time and realize that, yes, you’re ready. After five, ten, or fifteen years, your writing is truly ready for prime time.

Building a platform sounds overwhelming, exhausting. Where do you even start?

Join us in Your Platform Matters!

We’re a community led by a professional writing coach committed to helping writers reach readers in meaningful ways. We believe your message matters, so your platform matters.