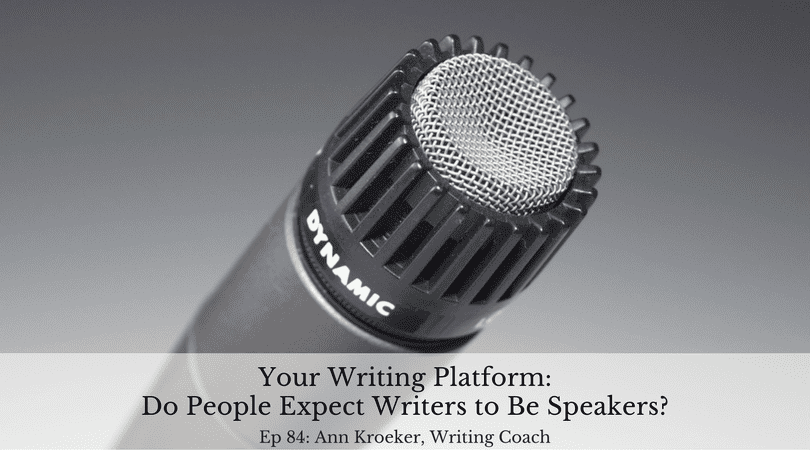 Last week I volunteered to serve at a speech and debate tournament for junior high and high school students. One of the women I served with asked if I thought writers were expected to speak more than ever before, whether through all the video options that are popping up like Facebook Live, or in person at events.

I thought back to the late 1990s, when I was pitching my first book to a publisher. The editorial team took me out to lunch, and someone on the team asked if I would consider speaking as a way to help sell the book.

If you’ve read On Being a Writer, you know I practically choked on my sushi, because I always thought of myself as a writer, not a speaker. I couldn’t imagine speaking, and I didn’t think about that being part of the marketing plan. I knew the right answer was “yes,” but I panicked at the idea of standing on a stage speaking.

The editor waited for me to turn from my California roll to look him straight in the eye. He said, “Something compelled you to write this message and share it with a broader audience. Right?”

“I would simply ask,” he continued, “couldn’t you see speaking as another avenue to share that same message? Your words—your message—spoken?”

That makes sense, I thought. I felt strongly about my book and I could see speaking as another way to spread its ideas.

And I did begin to speak…mostly in small venues, but occasionally in larger settings. I’ll be honest, I did feel panicky at the first few events, but I got a little more confident and comfortable each time. Obviously, I gained more and more experience and learned how I like to prepare.

That editor was right. Speaking gave me a new way to communicate with people. Interacting with audiences of all sizes gave me immediate input—impossible to get through the written word. I could test out new ideas for future articles and books. I could meet people and make connections. And, to the publisher’s delight, I could sell books.

I would never have pursued speaking if that editor hadn’t asked. But I’m glad he did.

To swing back around to the question I was asked at the tournament, I think publishers—and maybe people in general—do expect writers to speak, though I think they’ve expected it of us for many years. They expect it, or at least hope for it.

I think publishers hope that writers will open themselves up to the idea because it’s a tremendous opportunity to connect with people who care about your topic or story.

What’s new are all the ways we writers can get our message out there as speakers. I think any writer building a platform should—whether asked or not—consider looking for ways to speak, including taking advantage of all the technology available to record and distribute our messages.

For live events, you can find opportunities locally:

Whether in person or through a recording, people love to hear directly from authors. They love to hear a writer’s voice. They love to see how their eyes light up when they talk about something related to the story they wrote or the topic their book was about.

I think some people love getting the information or story through the spoken word not instead of but in addition to the written word—if it’s a podcast, for example, people have the option of listening as they exercise or drive. If it’s a video on YouTube, people can watch facial expressions and see gestures.

Give it a try.

You may panic. You may hate it. You may have an awkward first attempt. In fact, you probably will if you’re inexperienced in speaking. I was pretty sure someone fell asleep during one of my first-ever messages only to find out later she told someone that because I talked too fast and gestured too wildly, she shut her eyes to try to focus.

So I learned to slow down and tame my gestures. I got a little better each time. You will, too.

Just as your first writing attempts weren’t the smoothest, clearest pieces you ever penned, your first speaking engagements or YouTube videos won’t be your best. But they’ll be the beginning of something new.

As you grow more confident and keep trying, you may find you have a powerful new outlet to share your words—your message—spoken.

Building a platform sounds overwhelming, exhausting. Where do you even start?

Join us in Your Platform Matters!

We’re a community led by a professional writing coach committed to helping writers reach readers in meaningful ways. We believe your message matters, so your platform matters.