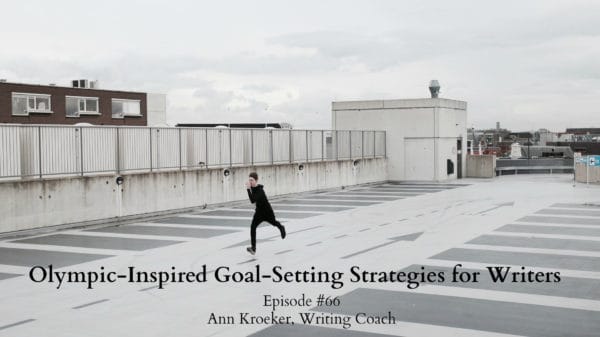 It starts with this:

A good goal has personal meaning.

Meb points out that no one gave him a goal or forced a goal onto him. No one said, “You have to win the 2014 Boston Marathon” or “You have to make the 2012 Olympic team.” He says, “Those were goals I set for myself. When I told myself, ‘I want to win Boston,’ it just felt right. I knew that chasing that goal would motivate me to do what was necessary to achieve it and that doing so would require me to do my best.”

He says, “Your goals should have that same pull on you. They should be things you want to achieve for yourself, not to meet someone else’s expectations.”

Same with your writing. If you find yourself with a goal, make sure it’s yours. Make sure it has personal meaning. Make sure it’s something you want to pursue for yourself, not because it’s the trend in publishing, or it’s the next logical thing after earning your MFA, or it’s what your friends, parents, spouse or coworkers expect of you.

Your goal has to be yours and it has to feel right. And it should have a pull on you to do what’s necessary to achieve it.

A good goal is specific.

Rather than say, “I want to run well at Boston,” Meb stated specific goals: win the 2014 Boston Marathon and make the 2012 Olympic team. The great thing about being specific is he knew how to devise a plan to get him there. As a runner, he had exact times to aim for. A more ordinary runner might set a time goal for a personal best or determine a number of times or number of miles to run per week.

Writers can follow this same approach. We could set a goal of landing our first byline in a local magazine or submitting a short story to a literary journal by January 2017. A writer might want to start a blog and publish an article once a week starting on a specific date. The plan leading up to that might be to identify two or three local magazines that might be a good fit, find their submission guidelines, and outline an article to propose in a query by a certain date.

Or to write a certain number of words in the short story and set a deadline to finish the draft in order to submit within a literary journal’s reading period. That new blogger might plan to write seven posts prior to launching in order to have a little cushion as he adjusts to the new schedule.

So to follow Meb’s approach, the first two steps are that the goal has to feel right to you, and works best when it’s specific because you can figure out exact steps to lead you to the target you’re aiming for.

A good goal is challenging but realistic.

Meb says, “Your goals should require you to reach outside your comfort zone while remaining within the realm of possibility.” In other words, it should stretch you without breaking you or causing you to give up. He warns against aiming too low or too high.

In his running world, he says an example is if you’ve run a two-hour half marathon then make your next goal to run another two-hour half marathon, it might not be particularly inspiring as a goal. On the other extreme, to imagine you could lower your time by an hour would be unattainable in a reasonable time frame.

If a writer is just starting out and has written only three blog posts, it’s probably unrealistic to set a goal of pitching to The New Yorker or National Geographic in a reasonable time frame. But that three-post writer might set the goal of increasing the frequency of how often he posts over the next two months from once a week to twice, or he might set a goal of increasing social media presence to two platforms and trying to guest post at a website open to new voices. That could be challenging, but realistic.

A good goal has a time element.

Meb says we need a time element—a deadline—and warns against setting a “someday” goal. Instead, he says to set a deadline that’s doable. After all, he observes, if you decide to run a marathon and the race is two weeks away and you only run three or four miles a couple of times a week, you can’t be ready. You picked a goal that’s coming up too fast. And if you set the goal way far out in the future, Meb thinks you’ll be unlikely to work toward it. He recommends working three to six months ahead for a big goal, including short-term goals that work toward it.

Meb breaks down goals to the monthly level and then to week-by-week goals. This hits close to what I’ve been recommending to some of my clients, which is to think in quarters, then break down those three months into monthly goals.

Break it down further into two-week spans of time where you revisit the plan at the end of those two weeks. Stop and evaluate how the plan is going. What processes need to be added? How are you behind and why? And then tweak as needed.

A good goal keeps you motivated.

Meb, like so many people, says to write down the goal. I do that. I like to write it down and find it keeps me motivated to see it in black and white on a page. Meb also recommends telling a few people your goals, but I’ve found other people who say to stay silent.

Derek Sivers is one of them. In a three-minute TED talk, he says telling someone your goal tricks your mind to thinking it’s already done. You felt satisfaction in the telling and are less inclined to do the hard work necessary to actually achieve the goal. So Sivers says keep quiet.

pick a goal with personal meaning

keep it challenging but realistic

I’ll leave it up to you whether or not to share it with others. You might whisper it to your writing coach so the two of you can devise the plan together. Otherwise, I recommend you write it down and then create a plan.

By the way, Meb was the oldest Olympic marathoner in the 2016 Olympics representing the U.S. That’s a reminder that our goals will evolve as we evolve. As writers, what we aim for when we first start out will naturally be different from the goal we pursue mid-career.

As we and our writing lives mature, our goals mature. That’s a natural progression of our work, and it means we’ve most likely come a long way and achieved much of what we set out to do. 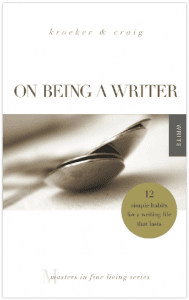