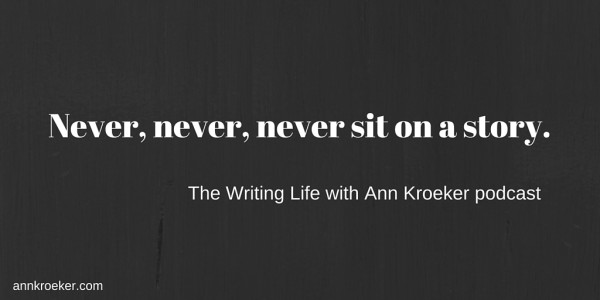 My parents were editors at a major metropolitan newspaper, and my dad often quoted his managing editor, who fulfilled all ’50s and ’60s movie newsroom stereotypes—puffing on a cigar, shouting across the newsroom. When this editor realized one of his reporters had been scooped by a competing newspaper, he shouted for all the newsroom to hear:

Though I’ve not been in the newspaper business other than writing the occasional feature story, I’ve seen this in my writing life. I’ve learned this lesson. “Never, never, never sit on a story!”

And that’s what I’m here to tell you today.

The times I’ve done nothing more than toy with a story, talking about it with friends and family, tossing it around like I’ve got all the time in the world to develop it, someone else goes ahead and writes it.

If you’ve got an idea in you, don’t sit on it. Don’t just think about it or chat about it with friends and family.

Do something today to make it a reality.

Don’t let somebody scoop you. That idea was given to you. And you will create it for readers, so it’s for them, too.

Take action. Get that idea in motion. Develop it. Finish it.

It might be hard and challenging at times, it’s going to feel risky—but you will have made it a reality.

When it’s done, you’ll be so glad.

So will your readers.

Ideas from this episode:

Resources mentioned in this episode:

Listen for the full podcast. You can subscribe to The Writing Life with Ann Kroeker with iTunes and Stitcher, where I’d love to have you subscribe, rate, and leave a review. You can also use the feed with any podcast player you use.

Connect with me on Twitter and Facebook, where I’m always sharing ideas to help us be more curious, creative, and productive.