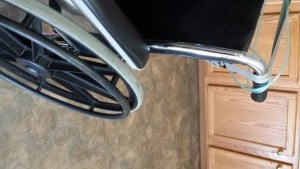 On a Saturday morning in September, my 86-year-old dad reported he’d been bitten on the forehead by an insect. It swelled up, he said. Strange, I thought. My husband and I drove out to the farm to inspect. He hadn’t been bitten. He’d fallen.

We took him straight to the hospital, where they admitted him for tests. While there, he ran into some complications, but they stabilized him and helped me arrange for Dad to stay in a rehab facility. Weeks later, rehab prepared him to return home where he would attempt to take care of himself.

He tried, but it was too much. Even with frequent visits from home health care nurses and therapists, he panicked one night and phoned 911. The ER doctor called me at 2:00 a.m. and said nothing was physically wrong with Dad; the doctor said Dad kept repeating one line: “I can’t take care of myself!” My brother was out of town, so my husband and I drove to the emergency room an hour away and arranged a return to rehab while we tried to form a plan.

We thought assisted living might work, so I toured a nearby facility. The director took me on a tour, dropping her voice to a whisper as we tiptoed past the bingo players in the dining hall. She pointed to the drink station. “Available 24/7,” she whispered. 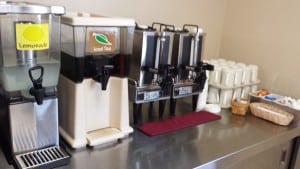 Dad would like that, I thought. I could imagine him coming down for an afternoon cup of coffee and staying to chat with another resident. I snapped photos of the coffee station, sent them to my brother along with pictures of the library, lounge and room. He agreed it all looked good. We decided to add Dad’s name to the wait list.

But within days, Dad continued his descent—not another tumble to the ground, but a fall nonetheless. He keeps falling deeper and deeper into an emotional and mental abyss—a prison of his own fears. He imagines anatomical impossibilities to explain his symptoms and clings to bizarre self-diagnoses. Reason can no longer reach him, though maybe it never did.

Assisted living is no longer an option. In November, one facility transferred him to another designed to handle complications like his. From there, he landed back in a hospital. Finally, we’ve got him situated in a place where trained medical staff can answer his call day or night and tend to his needs, whether actual or perceived.

I accompany him to doctor visits, explaining symptoms he can’t remember and taking notes on the doctor’s diagnosis and treatment plan to refer to later. He often mishears, misquotes, misconstrues, or misunderstands what they say, and even my careful notes cannot convince him otherwise.

He phones and begs me to bring him something, so I show up with his request. Soap and shampoo. A belt. Q-tips. Note pads and pens. Batteries for a hearing aid he doesn’t wear. One time I showed up with floss and spent an hour assuring him they weren’t throwing away his clothes. I helped organize the five rolls of plastic trash bags he’d demanded from one of the aides. At his orders, I straightened his newspapers and magazines into tidy stacks, fetched the TV remotes, and adjusted the front legs of his walker a notch or two. 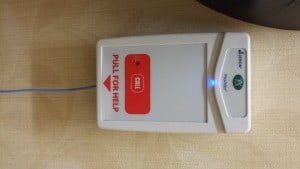 No matter how long I’m there, I can’t show up often enough or stay long enough to suit him. The nurses and aides can’t come quick enough when he punches the call light. He wants someone constantly by his side.

I try to talk him to a quieter, calmer space, inviting stories of his grandfather, aunts and uncles. He occasionally drifts into memories, and I listen; usually, though, he fixates on something that worries him—most often it’s his catheter, but it could be a bit of flaky skin, a tiny spot on his arm, the ideal position of his hospital-style bed. When he’s in that mode, nothing can distract or relax him. Eventually I have to leave to pick up my son from school or meet a client or eat. When I begin to excuse myself after spending an afternoon with him, he says I’m too damn busy.

Today he phoned. He phones often. Today he wants more socks, special ones for his varicose veins. He demanded them, he begged for them, he made sounds like he was crying. I said I’d try to bring them over in the afternoon. He abruptly stopped the unnatural crying and said he’d be dead before I got there. Then he hung up.

I’ll sort through the tub full of clothes we brought back from his house. I’ll dig through and find what he wants. I’ll leave behind the bills, the baskets of laundry, the editing projects, the cluttered bathroom counters and the splattered kitchen floor, and this afternoon, I’ll take Dad his socks.

Note to readers: Thank you for your patience. I know that some of you have wondered why I’ve fallen silent for such long stretches in this online space. This is why.