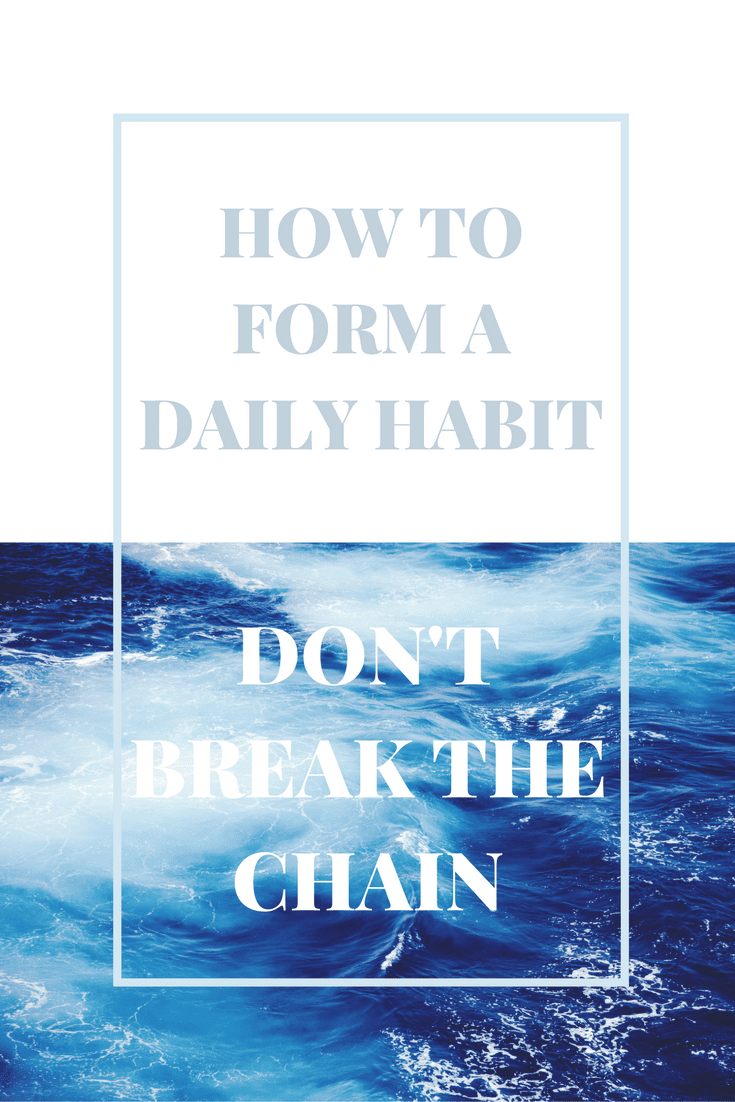 My junior year in college, I started scribbling each day’s to-do list the night before. I’d always include “wake up” so I would have the pleasure of marking off one item first thing in the morning: a visual sign of accomplishment.

I’ve always joked about how pathetic it was to include “wake up,” but I needed to see that I made progress. 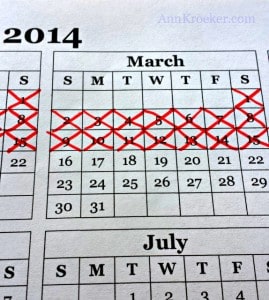 Decades later, I want to establish some habits, to have a rut to run in, but I’m still the same at my core: I need to see that I’ve made progress.  Over the years I’ve continued using to-do lists to keep track of tasks, and you’d think that adding daily habits to the to-do list (so I can cross them off each day) would lock them in, but for some reason it doesn’t work.

Since January, I’ve been testing a habit-forming concept that marks progress visually: Jerry Seinfeld’s Productivity Secret, also known as “Don’t Break the Chain.” Before recommending it to my blog friends or writing coach clients, I’ve been waiting to see how it works for me, given that forming habits is such a personal struggle. 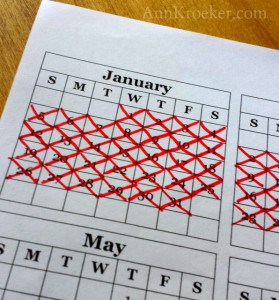 Guess what? It works.

At least, it works for me. And I heartily recommend it to anyone who struggles with how to form a daily habit.

In a complex, high-tech world, the simplicity of Seinfeld’s “Don’t Break the Chain” approach offers a refreshing alternative to buzzers and gadgets (though supporting apps are available). With this concept in place, I wake up motivated to follow through with the habit and feel pleasantly affirmed once I do.

Software developer Brad Isaac explains via Lifehacker that Seinfeld shared the idea of “Don’t Break the Chain” with him years ago when they met briefly at a comedy club. Brad asked for some tips, and Seinfield told him his system for ensuring he writes new material every day. A second, more in-depth article offers an explanation for how it’s done. Here’s how I understand it: 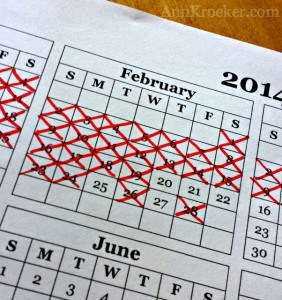 Consider developing a system for marking sick days or vacations when a habit like “Wipe kitchen counters” will not be performed. Perhaps you’ll draw an outline around the calendar’s box so that you still create connections to the X. Or you could draw an “A” for “absent” and let the bottom of the A touch the bottom of the X. In any case, it’s smart to build in a plan that accommodates real life.

On that day, you’ll break the chain.

But you know, it’s human to feel ornery, overwhelmed, busy and forgetful. And it’ll be a break, but it’s not the end. Don’t stare at that broken chain and feel like you’ve failed. Don’t rip down the calendar and give up.

Instead, pick up the habit again the next day and start a new chain. See if you can create a longer streak than before. You can see from my calendars that I’ve done that. A new day can be the start of a new chain, and I still find satisfaction looking back at those long stretches before I missed a day.

If habits are hard for you to form, give the Seinfeld Secret a try. Pick a habit, maybe two (but no more than two until you establish a solid month of X’s) and then Don’t Break the Chain.