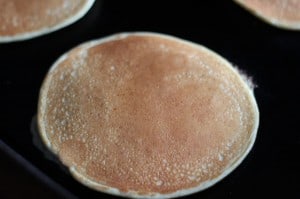 When we started camping years ago, my overall goal was to keep travel costs low. I didn’t want to waste precious beach time preparing, eating, and cleaning up complicated meals, so I planned super-simple meals: spaghetti with canned sauce, macaroni-and-cheese from a box, “just-add-water” pancake mix. I guess you could say my philosophy was to keep it simple (and be open to convenience food).

We bought a used motorhome last year and after our first trip, I realized that even though I now had a small kitchen and could plan more complicated meals, I didn’t want to spend any more time cooking than I did when I was boiling spaghetti water on a Coleman stove next to the picnic table and washing dishes by the spigot. My philosophy has stayed the same: Spend as much time as possible at the beach (or hiking and sightseeing) and keep meals simple.

Here are some of our meals:

For desserts, we took along some pudding cups and Oreos. I made a batch of brownies ahead of time to enjoy on the way.

The RV is great for people with dietary restrictions. I could take along my gluten-free pasta, cereals and breads; soy and almond milk; rice and quinoa and so on.

Next time we vacation in one location and stay connected to electric during the day, I plan to use a crock-pot to make meals. I’ll assemble an uncooked meal in a big baggie, place it in the crock, and then put the crock in the freezer. After the meal freezes, I’ll pull it out and set it aside in the freezer. Then I’ll make another one, freezing it to fit the shape of my crock. Then those can be transferred to the RV freezer when we pack to leave. Two easy meals, ready to go.

We pack plenty of chips and cheese sticks and animal crackers to munch on as we motor along.

Obviously, travel is not a time when we keep our diet healthy. But we do keep it simple. And this frees us to enjoy plenty of hours doing what we intended to do: vacation.