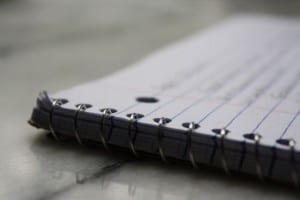 In college I took an acting class. Just one. I wasn’t much of an actress, and I was terribly overwhelmed and shy—a conservative misfit at a liberal Big 10 university.

One week, the instructor said we had to take a risk and then return to class and report on it.

My self-imposed risk was to introduce myself to someone sitting next to me in one of the giant lecture halls. Normally, I slid into my seat, endured the lecture in order to take notes, and slipped out as quickly as possible without talking to a soul. On the day of my risk, with heart pounding and face flushing red, I managed to introduce myself to a stranger. The girl said hi, turned around and left. Nothing more happened, but I did it.

In the next acting class, before I could share my quiet success, a guy piped up and announced that for his risk, he left his apartment, drove from one side of campus to the other, got out of the car and walked up to the door of a friend’s apartment…naked.

You can imagine how lame my story sounded, following that.

But I did learn a memorable lesson: risk is relative

Note: This story first appeared in the comments at Amy Sullivan’s place when I responded to her post, then she highlighted it alongside other stories that people shared.