My husband and I began watching Downton Abbey just this year. We would watch an episode whenever we had a free weekend, and at least once during every show I would crave tea. The characters sip it at breakfast and in the afternoon—even at night, Mrs. Hughes would settled into her room with a tea tray for a few moments of reflection at the end of her day.

Not only the sight of tea pouring from the pot, but the gentle clink of porcelain cup against saucer would stir something inside of me. For a few minutes during any given show, all I could think about was tea. But Downton Abbey offers no commercial breaks that would release me to hustle downstairs and fill the kettle with water.

So I’d just sit there, longing.

My husband and I managed to catch up on back episodes so that I could tune in with the rest of America to watch the Season 3 Finale.

And finally, I remembered the tea before the show began.

I put the water on to boil, pulled down the silver tray normally on display on the fireplace mantel, and selected a teacup from one of many my mom has given me—a Royal Albert pattern made in England: “Old Country Roses.” 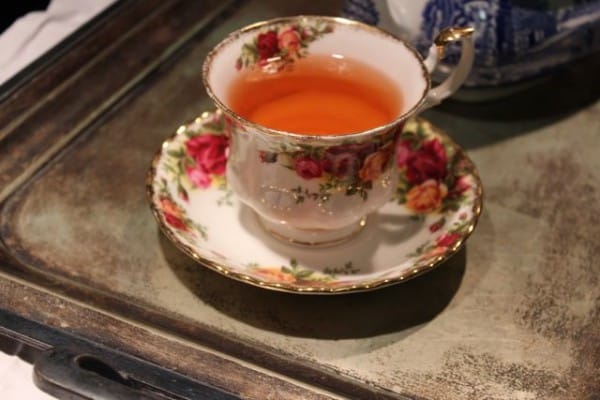 Though I presumed Mrs. Hughes would be sipping Earl Grey or some other black tea, I can’t have caffeine after twelve o’clock noon, so I brewed an herbal blend, carrying everything to the room where I’d be watching the show.

I settled in and waited. When the music began and the dog’s bottom waggled onto the screen during the opening credits, I poured the tea.

I lifted the cup to my lips and sipped as ladies on screen interacted. When I set it down again, the cup clinked against the saucer. I smiled, enjoying the sensory experience and feeling connected across time to my English ancestors.

At some point, however, I realized with a gasp that the unpolished silver tray—purposely left that way to contribute to our Shabby Chic decor—would agitate Mr. Carson, the butler, who would most definitely disapprove. And for all I know, it might even shame my English ancestors.

So when the season finale ended, I picked up the tray, carried everything downstairs where I washed the cup and saucer and returned them to the cabinet. I rinsed the teapot and placed it on a shelf. Then I wiped off the tray and leaned it against the fireplace bricks where it will stay—unused and unpolished—until the start of Season Four, when just maybe I’ll consider pulling out some silver polish and giving it a shine.