Most Wednesdays (or thereabouts) I’ve been recording a Curiosity Journal to recap the previous week using these tag words: reading, playing, learning, reacting and writing. Sometimes I mix up the order, just to keep you on your toes.

My husband and I saved for several years to take a vacation, just the two of us. We were dreaming of an exotic, tropical location for our 20th wedding anniversary, but when our 20th rolled around, all our plans fell apart. We couldn’t manage to do anything for the 21st, either.

Now it is our 22nd year of marriage, and though that anniversary doesn’t end in a zero or five, it turned out to be the year we could arrange for something. 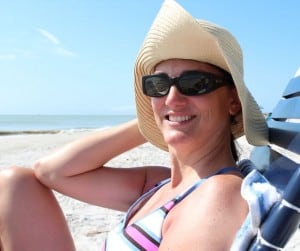 So we dipped into that special savings and took a trip to a beach. Just the two of us.

This trip didn’t land us on an exotic Caribbean island, but we did manage to secure tickets to southwest Florida where we found a hotel on Sanibel.

And as the days warmed to 80 degrees on that Florida beach, just the two of us would stretch out on lounge chairs without any kids asking if they can buy a Dr. Pepper at the vending machine or click on the hotel television to watch Cartoon Network.

And though the trip wasn’t picture perfect (see “Learning” below), we decided it was nevertheless just right, because it involved God’s creation spread out like a vision every morning, two bars of Endangered Species chocolate, uninterrupted time to chat or read, and amazing food—all for us to relish…just the two of us.

On the trip, I read Anne Morrow Lindbergh’s Gift from the Sea, where I revisited some of her observations that struck me between the eyes when my kids were little and I was feeling my way through parenthood like a blind woman groping for braille.

In the quiet, isolated, pre-blogging world when I lived the early years of motherhood, I landed on Lindbergh’s words that felt right and true, reassuring me I was not alone:

With a new awareness, both painful and humorous, I begin to understand why the saints were rarely married woman. I am convinced it has nothing inherently to do, as I once supposed, with chastity or children. It has to do primarily with distractions. (Lindbergh 29)

She continues in that same paragraph:

The bearing, rearing, feeding and educating of children; the running of a house with its thousand details; human relationships with their myriad pulls—woman’s normal occupations in general run counter to creative life, or contemplative life, or saintly life. (29)

At that stage of life when days stretched long and full, I craved time and space for creative, contemplative pursuits, but I was surrounded by distractions of little ones and their needs—blessed distractions, but distractions from the activities that had once satisfied my spiritual and creative self. I felt I lived a little off-center, mind-full instead of mindful. Lindbergh’s words helped me recognize and be aware of the pulls.

As she ponders simplifying life, she remarks:

I remember again, ironically, that today more of us in America than anywhere else in the world have the luxury of choice between simplicity and complication of life. And for the most part, we, who could choose simplicity, choose complication…if one accidentally finds [simplicity]…one finds also the serenity it brings. (33)

I craved a simple, creative, quiet life and the serenity I was sure it would bring. But I also wanted to live a full and devoted life as a stay-at-home mom. Lindbergh felt like a kindred spirit, and I took hope from her words, feeling understood for the first time. Her words contributed to my journey toward the slower, simpler life I wrote about both in The Contemplative Mom (to be re-released Summer 2013; available used for now) and Not So Fast

(currently available from any bookseller).

What a delight to read Gift from the Sea again when my kids are so much older and I’m in a new stage of life…and to read it on Sanibel, just across the causeway from Captiva, where Lindbergh first wrote those words in 1955.

Get Organised published another of my experiments. This one, about my gamble with tucking active paperwork out of sight, has worked well.

Any vacation can throw a curve ball. On the next-to-last day of my husband’s and my Sanibel trip, we pulled up the weather report and saw an alert that read:

HAS BEEN IDENTIFIED  ALONG PORTIONS OF THE SOUTHWEST FLORIDA COAST. OVER THE PAST  FEW DAYS

MAY EXPERIENCE RESPIRATORY SYMPTOMS WHEN  AN ALGAL BLOOM OF THE RED TIDE ORGANISM IS PRESENT ALONG THE  COAST AND WINDS BLOW THE AEROSOL IT PRODUCES ON SHORE. SYMPTOMS  ARE GENERALLY TEMPORARY

So we left the breezy beach and headed to the room, where I used my rescue inhaler and my breathing returned to normal. We looked at the weather advisory more closely, and my husband read the last line out loud: “‘Symptoms are generally temporary.’ That’s reassuring, isn’t it?”

While my husband and I settled onto fluffy, blue-striped, hotel-supplied beach towels spread out on hotel lounge chairs on Sanibel beach, we noticed a woman who sat on the sand a few feet away from us, sifting through a pile of shells. She looked to be happy as a clam, picking out a single shell from the mass now and then before running her hand across and through, waiting for another to catch her fancy.

“That looks like someone I know,” I said to my husband. “A writer. I’ve met her at several writing conferences. Her dad ran the Christian bookstore in the town where I grew up.”

“I’ve only seen her in person a few times, but it sure does look like her.”

“But if it is, wouldn’t that be amazing?”

“But if it isn’t, wouldn’t you be embarrassed?”

“I know! I’ll use her name really loud.” I raised my volume. “Hey, that looks like Cindy Crosby!” No reaction from the lady by the shells. “Seriously, that looks so much like Cindy!” Nothing.

My husband shrugged. “See? It just looked like her. Now leave that poor woman alone.”

“She does look happy. I’ll stop being silly.” I pulled out Gift from the Sea, which I was determined to finish before we left the island, and directed my attention to the book.

Days later, however, in the airport while waiting to board, I flipped open my computer and pulled up Facebook. Cindy Crosby, one of my Facebook friends, had just updated her profile picture to a beautiful view of the Gulf of Mexico, featuring the same blue hotel lounge chairs and blue-striped towels we had used all week.

I left a comment that I knew exactly where she was because I had just been there, and sure enough. It was Cindy Crosby all along, sifting through shells, relishing those moments in God’s creation. It’s a small, small, perfectly lovely world, isn’t it?