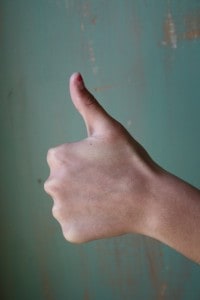 Back in 2006 I read an article in The New York Times called “What Shamu Taught Me About a Happy Marriage,” by Amy Sutherland. Tired of nagging her husband to change minor habits such as habitually misplacing his keys or leaving used tissues in his wake, Sutherland switched to positive reinforcement.

The idea came to her while researching exotic animal trainers and how they could get “hyenas to pirouette on command, cougars to offer their paws for a nail clipping, and baboons to skateboard.” Sutherland wrote:

The central lesson I learned from exotic animal trainers is that I should reward behavior I like and ignore behavior I don’t. After all, you don’t get a sea lion to balance a ball on the end of its nose by nagging. The same goes for the American husband.

She began to thank her husband when he placed just one dirty shirt in the hamper. Meanwhile, she would step over soiled clothes that remained on the floor without saying a word about it—thus rewarding desired behavior and ignoring the rest. As he basked in her gratitude, the piles of soiled clothes shrank. Success came from pointing out what worked and ignoring what didn’t.

Sutherland did, by the way, confess her techniques to her husband. He was not only amused; he learned how they worked and tried them out on her, as well.

Another place I’ve seen positive reinforcement that acknowledges and rewards desired behavior is online with “TAGteach,” where clickers (yes, the same clickers used by dog trainers, like whistles for dolphins) are used for training people to learn new skills. In the following video, kids learn basic high jump techniques:

Note the self assessment and absence of frustration when they miss the tag point. This video shows rapid learning of a complex skill without ever pointing out mistakes. It also provides a good example of backchaining… starting with the last part of the skill and gradually adding pieces to move toward the completed skill.

The trainer reinforces the desired behavior with a reward—a *Click*—without ever pointing out mistakes. Here’s another example in which a young boy learns to tie shoes from a teacher who uses only positive reinforcement (and a clicker…and apparently a few beans).

What do you think?

Could this work with writers, focusing on one skill at a time and rewarding them with the equivalent of a *click* when I spot it effectively woven into their assignment? Perhaps writing a simple “Yes!” next to the skill performed well (attempting simile or alliteration, for example), while ignoring all other problems?

This approach must require tremendous restraint, but what a great atmosphere it could create. As people receive affirmation for what works, they can duplicate results, perfect that skill and move to the next level—building confidence based on substance.

Positive reinforcement has been known to work with me. I wish I could say it was in the area of professional development, but the reality is that it’s a bit more vain. One time I wore a new (well, new-to-me) striped blouse with a jacket and nice-fitting jeans. I’m never confident putting together outfits, so I worried a little. Did it work? Or did I look like a Goodwill goofball?

Two people went out of their way to tell me, “You look cute!” 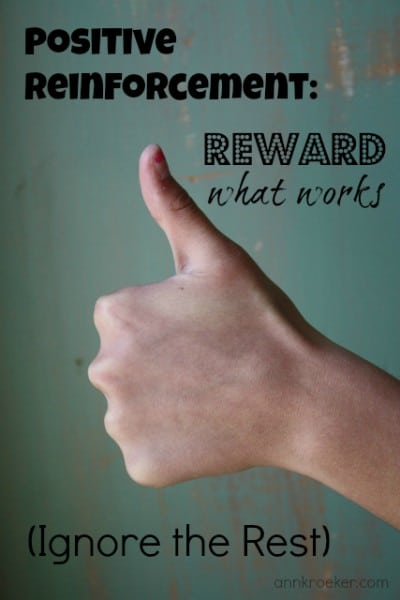 Reprinted (adapted) from the archives.