I’m only on chapter three, so it’s too soon to offer any thoughts.

My dad was a Linotype operator during the exact same era presented in the following documentary. He set type for a small-town newspaper then went on to work after college as an editor at a major metropolitan newspaper that used this same basic printing process (excluding a few steps specific to book making and binding). Also, my father-in-law was a printer and book editor who was familiar with every one of these steps.I thoroughly enjoyed watching this vintage documentary, appreciating this ten-minute tour of work that was such a big part of my family’s history. The announcer’s voice felt familiar; he must have provided narration for many films of that era.

Many thanks to Maureen Doallas for sharing this on her blog. She, in turn, credits Page Views and Paris Review Daily for pointing her to the link.

I’ve been playing around with Word Candy. They wrapped this up for me on Tuesday evening just as my eyes were heavy and my mind fading after a full day. 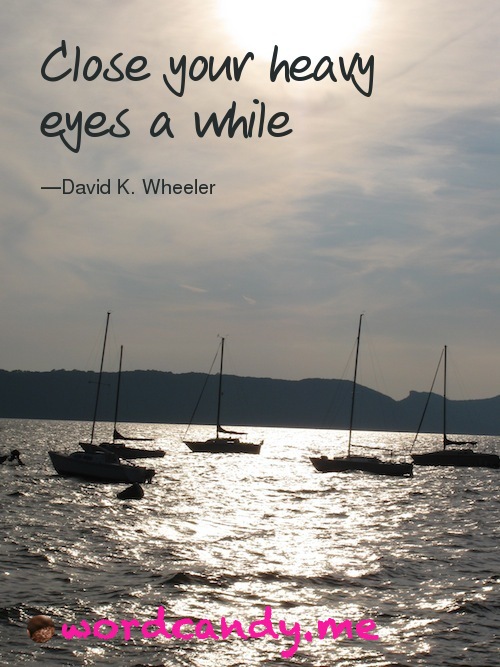 I listen to the waxing and waning of the cicadas’ song, a whirring that speeds up, climbing higher in pitch and volume, then slows and quiets only to start over again after a pause. This is the sound of late summer days; crickets take over as the sun goes down to dominate the nighttime soundtrack.On these nights, the Perseids meteor shower shoots across the blue-black sky and we lie on blankets in the grass staring at the stars in search of a blazing streak, swatting mosquitoes because we’re too lazy to go inside and pull on long pants.We relish these last days of freedom before academic obligations drive our daily schedule.Then, we wake one morning with a gasp because we’ve suddenly arrived at the days of transition.I know I’m in transition when I begin to clear and clean my desktop, sell unneeded books, and sort through piles that have sat for months gathering dust. A few hours after donating bags of clothes and household items to Amvets, I drive to a big box store for bags of school supplies. I recognize and flinch at both lack of progress (stuff out/stuff in) and first-world luxury (so much stuff).Waking to sunshine, I pull out the chronological plan I follow to read the Bible in a year. I grab my blank book and a pen. I copy out this verse:

This is what the LORD says:Stand by the roadways and look.Ask about the ancient paths:Which is the way to what is good?Then take it and find rest for yourselves.But they protested, “We won’t!” (Jer. 6: 16)

I look up and realize the cicadas seem to be quiet longer than expected. In the relative stillness, I look at those lines and ask, silently, “Every fall I stand at a kind of roadway and wonder about those ancient paths, Lord. Which is the way to what is good? Show me, so I can take it and find rest.”Looking back down at the passage, I don’t gain specific direction, but I feel sure that I’m heading in the right direction in the deepest way, and that it has less to do with my cleared desk and organized books.I breathe sweet summer air that drifts through the open window next to my desk and scribble a few words of thanks, and the cicadas, fewer this time, start up another wave of their summer song with that unmistakeable whirr.

For the past few years, I’ve taught a high school writing class for students who enter with minimal formal writing experience. Each year I have changed some things in the course, but regardless of the curriculum I use or the number of papers I assign, I focus on essays and research papers.I teach once a week, and as I prepare, I often come across resources, ideas, and reminders that might be helpful to writers of any age, even if the concept is something learned long ago and practiced for years.For fun, I may begin to share some of those tidbits, often adjusting the concept in relation to blogging. This week, for example, as I pulled together information about plagiarism to present to the class, I published some thoughts on how I might incorporate thorough citation on my blog.We’ll see if I can pull off a brief post about the writing process each week—I may be too busy grading papers!

Word Candy image compliments of the WordCandy.me beta app. You may “pin” in a way that links back to this post.