Each Wednesday (or thereabouts) I’ve been recording a Curiosity Journal to recap the previous week using these tag words: reading, playing, learning, reacting and writing.

On Sunday I started Unbroken: A World War II Story of Survival, Resilience, and Redemption.

Finished it on Monday.
As soon as I finished, I wrote a brief response on Goodreads, claiming I wasn’t so crazy about the informative sections because they interrupted the powerful, irresistible narrative. Today, however, when I thought about the nonstop intensity of Louis Zamperini‘s story, I thought maybe those informational portions were intentional respites; maybe Laura Hillenbrand realized that readers would need a pause now and then to catch their breath. 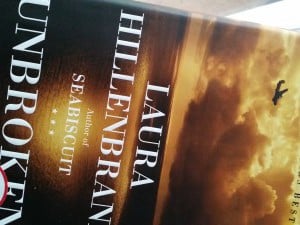 While bedridden by chronic fatigue, Hillenbrand conducted meticulous research, piecing and weaving together overlapping characters and scenes to retell the saga. Louis Zamperini said in an interview (see below) that she was one of his heroes because of all she accomplishes in spite of her debilitating illness of 20+ years. To honor her, he sent her one of his purple hearts.

If you have not read Unbroken and intend to, please know that Hillenbrand seeks to recreate everything that Louie experienced. Some situations are violent, some language is offensive (mostly nicknames the POWs gave to their guards), and some actions are deeply disturbing. If you begin the book and realize that reading it will be too overwhelming, you might prefer to simply watch the CBS documentary (see below) broadcast during the 1998 winter Olympics held in Nagano, Japan. It hits the main points of the story and introduces you to this remarkable man.

Spoiler alert: As I just pointed out, the following video provides a good overview of Louis Zamperini’s story. If you have not read Unbroken and plan to, do not watch the following CBS video. I believe you’ll appreciate the book much more if you simply let the details unfold, page after page.

If you have read the book, however, or if you know you won’t ever be reading it, enjoy hearing from some of the main characters (beginning 9:54 through 50:00). After the video, a USC professor interviews Louie in person. In total—the CBS documentary + the interview—the video lasts 2 hours, 17 minutes. I watched it on Tuesday and felt it was worth every minute.

Absorbed in Louis Zamperini’s story, stunned by his suffering, inspired by his faith, and motivated by his resilience and spunk, I would say the closest I came to playing was to delay a few duties on Monday in order to finish the book.

Spoiler alert: The following section reveals a few details from the book, so consider how much you want to keep as a surprise.

From the USC interview, I learned that Zamperini signs books with the phrase “Be hardy.” He feels like this current generation hasn’t known struggle like his did. “Our period of time before WWII,” he explained, “we had nothing but adversity, and we had to overcome it.” He observed that some people don’t try to overcome when they face something hard. They just stop and then “it eats on them. I like the term hardy,” he continued, “because every time you overcome an adversity, you become more hardy. “At age 94, his health (in 2011, when the interview was conducted) is great. He rarely gets sick. His explanation? “You have to stay positive and believe that all things work together for good for those that love the Lord…look for what the good is going to be.”

Also, he says that staying cheerful is where your health comes from. “Have a cheerful countenance at all times…you’ll get white corpuscles into your immune system and get well faster.” (You should see his smile!)

Zamperini took survival courses, including a course with Dr. Webster at USC who said that your brain is like a muscle—if you don’t use it, it’ll atrophy. So Zamperini had a plan to keep his and his fellow castaways’ minds active while floating on the life raft. He’d teach the other two men words of Hit Parade songs, his pilot and friend Phil taught them hymns, Louie described in minute detail how his mother prepared some of her famous Italian dishes; they reminisced and planned ahead. All of that served as a daily mental regimen. The result was that “after 47 days, our minds were sharper than the day we crashed.” He explained:

If you watch television every day, I don’t think you’ve heard any good news recently, all these riots and all this stuff on TV, all this swearing and pornography and all that, and our brains are fed that every day. Okay, you crash in a plane. You leave this confused world and chaotic world, and a whole new world starts. Everything we put in our minds from that point forward was positive…we fed our minds what we wanted to feed them. (Louis Zamperini, from the USC Annenberg interview)

Zamperini’s boldness in speaking about his faith inspires. In the interview, he said, “Hope is the power of the soul to endure. And hope must have a reason. Faith is the substance of things hoped for; the evidence of things not seen. So hope must have an object.” He wove that scriptural reference into his explanation of the rescue from sea. 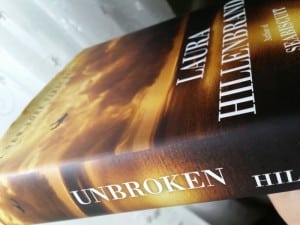 When asked how he keeps stress out of his life, he said he lights a fire in his fireplace, gets his dinner, and sits there for about an hour listening to classical music like Bach and Beethoven, relaxing. He claims, “When anxiety comes knocking, you don’t have to let the anxiety in.”

The interviewer observed that after Louie’s conversion, he forgave everyone who had tortured him during his years as a POW. Louie said he gets a lot of letters from people who read the book but can’t shake a feeling of vendetta and hatred toward someone in their lives. “If you hate somebody, that’ll give you stress…it’s like a boomerang that misses the target and comes back to hit you.” Upon experiencing the grace of God, he was filled with an inexplicable and instant forgiveness toward all of his tormentors. He lives free from hate, choosing to trust that God is working all things in his life for good.

I’m preparing materials for the writing class I’ll teach this fall, reminded of the importance of citation. I’m working on a post about that and how I intend to apply it to blogging and social networking. And in a more general sense, I’m considering how to make the most of my time. If Laura Hillenbrand can research and write a 457-page biography while bedridden, sure I can be more productive than I’ve been.