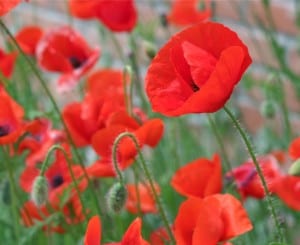 The following story is adapted from a special collection my mom assembled for her parents decades ago. I hope that in a small way, sharing this lighthearted piece will serve as a kind of decoration on Memorial Day—though it is not meant to diminish the solemnity of Memorial Day, set apart to remember those who have given their lives in service to our country.

My grandfather joined the Army in 1917 and was overseas with the Motor Transport Corps in France doing a lot of convoy work.

One assignment was to transport to Paris some high-powered Cadillac and Buick cars for General Pershing’s staff, and my grandfather was in charge of assigning the drivers. He decided it would be nice to see Paris, so he assigned himself to drive one of the cars—one version of the story has Grandpa driving Pershing’s personal vehicle.

Well, the convoy was flying down the road at top speed, and Grandpa had never driven a fast car like that. He had trouble keeping up.

Speeding down a hill, he suddenly saw that the entire convoy had stopped for some trucks to pass.

“I knew I couldn’t stop in time and had just about decided to ram the rear truck,” Grandpa explained one time (adding that he probably would never get out of the guardhouse for wrecking Pershing’s car), “when I spotted a possible way out. Just before I crashed into the convoy, I veered to the side, careened along the convoy and ran upon a pile of cinders that had been left by the roadside for winter emergencies.”

The soft landing left the Cadillac undamaged, wheels spinning as it perched atop the heap.

When Grandpa got out, the convoy leader ran up, shook his hand and said, “That was one swell piece of driving!”

Grandpa was too weak to answer, but said he was thinking, “You mean that was one swell piece of luck!” 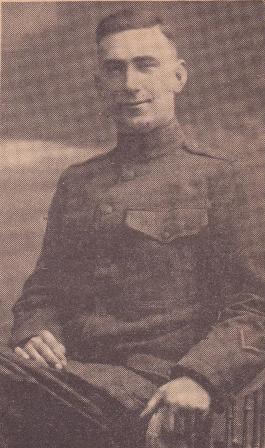 Pictured above: my grandfather, the man who very nearly crashed General Pershing’s car. Photo was taken in France.

He returned from the war and married his sweetheart, my grandmother. Together they raised four wonderful children—my three uncles and my mom.

All three of my uncles served in World War II.

Thank you to all who have served or are serving in our armed forces.

(modified from the archives)