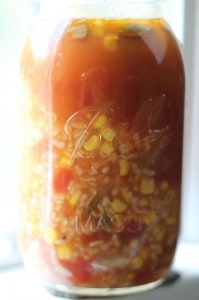 One afternoon, I realized I had some mushrooms that needed to be eaten, and a bunch of leftovers. So I decided to invent some kind of soup.In olive oil, I sauteed the mushrooms and a tiny bit of shallots, then added sliced carrots. In retrospect, I should have started with the firmest veggie, which would have been the carrots, but that’s okay.When those were soft, I added broth and then threw in some leftover rice and corn. I shook in a bit of salt and pepper. Tasted it.Bland.Then I found a can of tomatoes, spiced for chili. I opened it up and tossed it in.That was the magic ingredient. The spiced tomatoes added depth needed to pull everything together.The soup became a stew. And it made a lot of stew; I ended up pouring it into several storage jars and jamming them into every free spot in the fridge.And then I ate mushroom stew for lunch, dinner, lunch again, dinner again. 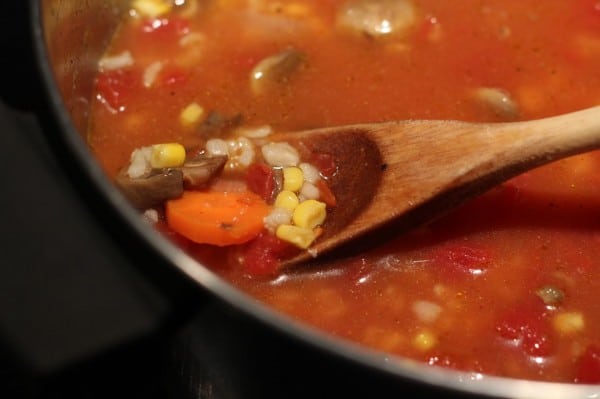 I’m not sure the quantities are 100 percent accurate, but here is the basic idea, as best as I can remember:Made-up Mushroom Stew

Saute carrots in olive oil until soft, if they are cut in chunks or circles; if shredded, save them for later. Saute sliced mushrooms and then add diced shallot or onion. Cook until soft. Add broth, rice, corn and tomatoes (and shredded carrots, if you shredded instead of sliced them; they’ll cook quickly this way). Season to taste using spices that match the kind of tomatoes you used. Heat through. Top with crushed corn chips.

Photo by Ann Kroeker. “Pin” these images in a way that links back to this particular page, giving proper credit.