(check out the new button my daughter made…should I switch?)

For the Food on Fridays carnival, any post remotely related to food is welcome—though we love to try new dishes, your post doesn’t have to be a recipe. We’re pretty relaxed over here, and stories and photos are as welcome as menus and recipes. When your Food on Fridays contribution is ready, just grab the button to paste at the top of your post. It ties us together visually. Then fill in the boxes of this linky tool to join the fun!

[This is plucked straight from Wednesday’s post.]As I mentioned on Monday, we’re spending Spring Break at home.That same day, I decided to try to recreate right here in our Northern state some of the Southern eats I enjoy when we road trip to Florida.Fried okra. Shrimp. Sweet tea. Cole slaw. Hush puppies.I found a bag of fried okra in the frozen food section of Wal-mart along with a box of coconut shrimp not unlike some I’ve had as an appetizer at Scampy’s in Panama City several years ago. I picked up some sweet tea from a fast food restaurant, since I can never seem to brew it right myself.Then I faced the challenge of hush puppies.No frozen hush puppies at Wal-mart.My husband phoned from Kroger. No frozen hush puppies there, either.“It’s because we’re Northerners!” I wailed.Then I thought maybe I was wrong. Maybe I wouldn’t find frozen hush puppies at a Southern grocery store, either, because no self-respecting Southern cook would reheat prefab frozen hush puppies. No way. In the South, I’ll bet all hush puppies are always from scratch.But I’m not Southern. And I’ve never deep fried food in my life. I was counting on finding them frozen so I could stick everything in the oven and just minutes later be eating beach diner food for lunch. But the hush puppies. I had to have hush puppies.So I grabbed a bottle of Crisco oil and a bag of Martha White hush puppy mix and headed home.Because we’re in vacation mode, I had all the time in the world. I mixed up hush puppies according to package instructions and heated the oil. I dropped blobs of batter by the teaspoonful into the pot.It took a while, plunking them in, watching them sizzle, plucking them out, draining them. But I persisted.Finally.I ate shrimp and coleslaw with fried okra and hush puppies for lunch. 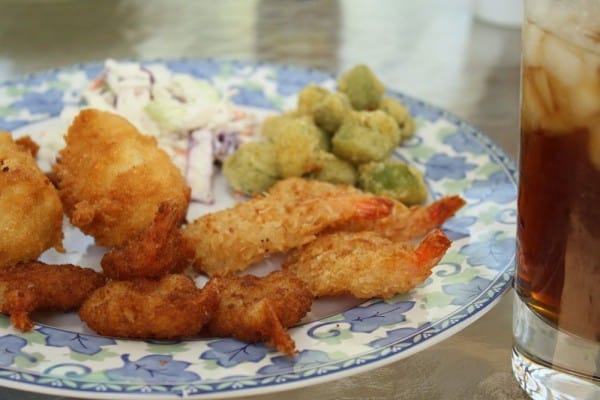 Photo by Sophie Marie. Used with permission. “Pin” these images in a way that links back to this particular page, giving proper credit.