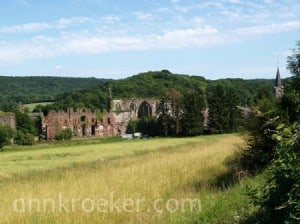 When I married my bilingual husband 21 years ago, I didn’t speak of a word of French. After the ceremony, we traveled to Belgium for a second reception where I was greeted by well over a hundred guests with beaucoups “bisous” and a heartfelt “Felicitations!” which means “Congratulations!”

At the reception, his friends and family performed skits, told jokes, reminisced, and sang songs….all in French. My husband translated as best he could, but he couldn’t keep up. The jokes flew at him, and it’s hard to translate jokes because half of the humor is contextual. I told him to just relax and enjoy himself. Meanwhile, I tried to guess the meaning of the speeches and toasts on my own. This was impossible, of course, and I ended up mentally exhausted. By the end of that evening, I promised myself I would never feel this way again.

I would learn French. 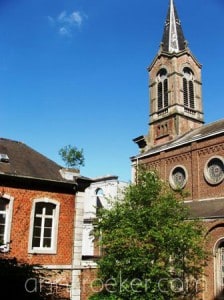 Instead of simply signing up for a class, however, I tried a DIY method, piecing together resources I collected here and there over the years. If I were launching this do-it-yourself language learning approach today, I would save up my pennies and buy Rosetta Stone French. But it didn’t exist back then, so I used what I could find.

Here is my non-sequential, piecemeal, do-it-yourself French program, cobbled-together with the resources I could put my hands on. I rarely worked through anything beginning to end, abandoning a book or program when I got bored.

Highly motivated to speak and understand the language (less concerned with writing), I applied myself daily and reinforced in as many ways as possible. I became functional in French, understanding quite a bit and able to express myself reasonably well. I’m not ADD, but I think this approach would accommodate an ADD personality as well as a non-sequential, easily bored personality.

Bonus: Music & Singalongs: A friend reminded me in the comments how powerful singing can be as a powerful language-learning tool. How could I forget all of the kids’ songs I have sung with my kids? Frère Jacques, Sur le Pont d’Avignon, Au Claire de La Lune, to name a few. It doesn’t have to be kids’ songs, either. I already mentioned Goldman and Cabrel, but you could listen to the classic Belgian singer Jacques Brel perform the melodramatic “Ne Me Quitte Pas” and sing along with the sorrowful chorus. You will never forget that phrase.

Or, for a more encouraging tone, try some Christian options. Listen to “Tu Et Le Maitre,” a worship song by “Exo,” a Christian group my in-laws introduced me to, or the melodic praise song “Je Lève Les Yeux” by Constance (lyrics in French here).

The DIY approach is not the most efficient path to fluent French, nor is it the most thorough. But it’s kind of fun. And that’s important to me when I launch any long-term project like language acquisition: to sustain interest I need to have a little fun.

Whether you use these ideas to create a French curriculum of your own, or to enrich a French class you’ve signed up for, may you find yourself able to listen, understand, and speak confidently with your francophone friends.

May I leave you with a little fun? While I can’t recommend any other videos by these guys, “Foux de Fa Fa,” a scene from an episode of Flight of the Conchords, is a silly song incorporating the kinds of words and phrases students learn in French class. The chorus itself, however, “Foux de Fa Fa,” is a nonsense phrase.