Each Wednesday I’ve been recording a Curiosity Journal to recap the previous week using these tag words: reading, playing, learning, reacting and writing.

I started a book called The Thinking Life: How to Thrive in the Age of Distraction

. Lots of lines about slowing down. It’s a secular book, but makes me very happy, seeing how much ties in with Not So Fast.

Aren’t a society’s competitiveness and its prospects for a better future rooted in more than sheer technology…When we’re all hyperconnected, will our families and communities be stronger? Will we build better organizations and lead more prosperous lives? Most important, can we accomplish any of these lofty goals if we continue devoting all our energy to eliminating the very thing we need most to achieve them in the first place–some space between tasks, respites, stopping places for the mind? (from pp. 1-2 of P.M. Forni’s The Thinking Life, quoting William Powers)

Now, I think technology can be a tool used for good and for offering respites (take, for example, Everyday Poems, delivering a poem a day into your inbox to read and reflect). But I agree that it can also be a distraction, and it requires tremendous self-control to maintain “some space between tasks” and “stopping places for the mind.”I appreciated the interaction overheard between Mr. Obama and David Cameron during Obama’s campaign, when he was caught on a boom mic saying to Cameron, “…the most important thing you need to do is to have big chunks of time during the day when all you’re doing is thinking” (Forni 2).  Forni reflects, “Letting oneself be swept along by the tidal wave of busyness was one of the worst things a president could do. ‘You start making mistakes, or you lose the big picture,’ Mr. Obama observed…Good thinking, however, doesn’t just happen; it is the result of a personal commitment” (Forni 3).

Yesterday morning, my husband went around waking up all the kids. He greeting our middle daughter, and she responded, “No, why would I do that?“He had said, “Happy Valentine’s Day,” but she thought he asked, “Have you been outside today?”I know it’s one of those “you had to be there” moments, but at 6:30 in the morning, the misunderstanding seemed hilarious. We kept laughing about it, and when she came down for breakfast, we all looked up and asked in unison if she had been outside.So now you know the inside joke that I’m sure will return year after year. We’ll be calling her the morning of February 14th when she’s in college just to ask if she’s been outside today. 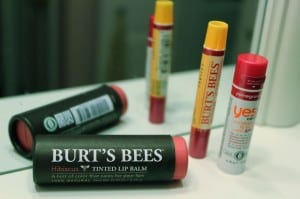 Tuesday evening, our local news reported that the FDA released a report indicating the presence of lead in hundreds of lipsticks. Even though I use natural products like Burt’s Bees, I thought I’d scan the list anyway…after all, my daughters are starting to wear makeup.Scrolling through, I noted lots of familiar companies like Revlon, Maybelline, L’Oréal, M.A.C., Avon, and Cover Girl.Then…Burt’s Bees. My beloved Burt’s Bees lip shimmers that slide on so smoothly while providing a subtle hint of color are guilty. They made the list.Several colors showed up with varying degrees of lead content, and while the numbers are small, there is no known safe level of lead intake.Under a column labeled “Lead (Pb) (ppm),” I saw these Burt’s Bees lip shimmers: toffee (2.81), guava (2.24), raisin (0.43), Merlot (0.33), and champagne (0.76). They have lead in them. Lead that I smeared on my lips and likely ingested while eating oatmeal and sipping tea. Lead, in a brand that is positions itself as natural. Maybe they figure if it’s on the Periodic Table of Elements, it’s natural. Of course, so is uranium, but I don’t want to smear even a smidgen of that on my lips, thank you very much.This list also revealed parent companies. Guess who owns Burt’s Bees? Clorox.I don’t like getting snookered.Forget Burt’s Bees.I’ll just stir a little beet juice into some beeswax to make my own lip shimmer.

Next to my mom’s laptop sits a framed photo of her parents. My grandma—old, but younger than I remember her—smiles sweetly at the camera; Grandpa leans toward his bride, head turned slightly toward the lens, a relaxed grin to match the twinkle in his eye. The portrait only shows their heads and shoulders, so I can’t be sure, but it looks like he’s slipped his right arm around her waist and reached to touch her hand with his left.Grandpa died before I had a chance to lock in solid memories of the two of them together, but my mom says he teased Grandma in a tone that was undeniably filled with affection. Years later, when I inherited Grandma’s engagement ring, I hoped some of that would rub off. I hoped I would always smile as sweetly as the first girl who wore it, cherished by my own husband, who lovingly leans toward me to slip one arm around my waist and touch my hand with the other.

I’m enjoying my work editing the “I Do” series at The High Calling. Today’s post by Emily Wierenga is hard, but beautiful. And almost 60 people participated in our Community Writing Project hosted by Jennifer Dukes Lee at Getting Down With Jesus. It was a privilege to work with Jennifer to select some to highlight for a post that will go live today at noon ET.

Credits: All images by Ann Kroeker. All rights reserved.Affiliate links included.Forni, P. M. The Thinking Life: How to Thrive in the Age of Distraction. St. Martin’s Press: New York, 2011. Print.