We invited a family from church to join us for a brunch of sausage and egg casseroles along with a new recipe: French toast casserole.

I was experimenting with a Paula Deen recipe, making one pan the way she said, with little slices of baguette lined up all neat and tidy. 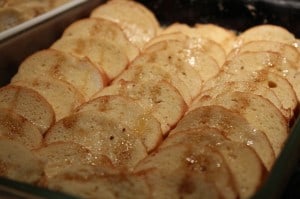 For the second pan, I tore the pieces in half and added blueberries for more of a bread pudding effect.

The biggest problem was timing…the casseroles take 45 minutes to bake and I couldn’t get back after church in time to get them started and finished in a reasonable time frame.

So everyone arrived and the food was still cooking. We stood around for a long time chatting and chatting and checking and rechecking to see if it was done. It took too long.

Our guests explained that they use the delay bake or timed bake feature all the time on Sunday mornings or when they are heading out to pick up kids from school and head off to sports practices. They stick their casseroles or roasts in before they leave and by the time they get back, dinner is bubbling hot and ready to serve.

I was afraid, though. I knew that she did that, but I was afraid to try. And I admitted it. “Is it really safe to let stuff sit around in there, raw and uncooked until the oven clicks on?”

“My dad was a food chemist,” she said, “and he points out that the temperatures during baking kill off any bacteria that might start to grow, so I just go with that. I’ve done it for years, and we’ve never gotten sick.” Her husband grinned big and stood a little straighter, like he was extra strong and healthy.

The conversation moved on to other topics, but I kept wondering about the timed bake feature. How nice it would have been to just pull out those casseroles to serve right when the guests arrived.

Brunch was delicious. The kids loved the meal, so I promised to make it again. Next time I’m going to use this recipe and add blueberries.