I started up Sophie’s World again, which I had abandoned several months ago; I also began reading Scott Russell Sanders‘ Staying Put: Making a Home in a Restless World

I love the details Scott uses to remember the place of his youth as he drives to revisit it as an adult. He writes of Mr. Ferry, who used to let the neighborhood kids swim in his pond:

We knew that when we knocked at Mr. Ferry’s door, raising money for school or scouts, he would buy whatever we had to sell. He was a tender man. He loved his wife so much that when she died he planted a thousand white pines in her memory. The pines, spindly in my recollections, had grown into a forest by the day of my return. (7)

And while details like forsythia and willow trees bring his writing to life (show; don’t tell) I also appreciated this more straightforward observation:

One’s native ground is the place where, since before you had words for such knowledge, you have known the smells, the seasons, the birds and beasts, the human voices, the houses, the ways of working, the lay of the land, and the quality of light. It is the landscape you learn before you retreat inside the illusion of your skin. You may love the place if you flourished there, or hate the place if you suffered there. But love it or hate it, you cannot shake free. Even if you move to the antipodes, even if you become intimate with new landscapes, you still bear the impression of that first ground. (12)

I was planning to take a snapshot of this coffee mug one morning. It’s my favorite for coffee. 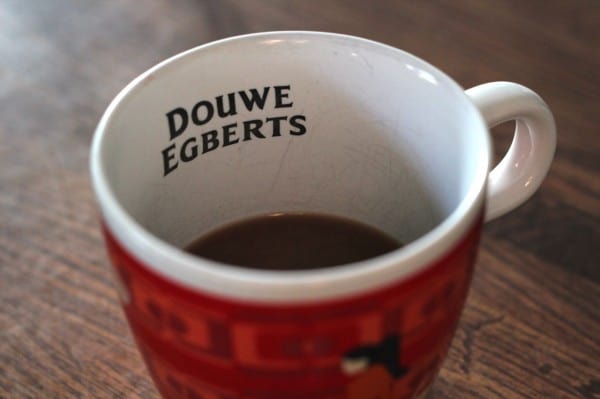 The Belgian Wonder’s sister gave it to us when we visited her in 2008. I admired it while sipping Douwe Egberts one morning in her kitchen.”Douwe Egberts coffee in a Douwe Egberts mug. I love it! It’s so retro, so fun,” I exclaimed. “Plus it’s not too big and not too small.”

As we were leaving to fly back to the States, she handed it to me. “We can get another here in Belgium,” she said. “Take it.” I almost cried. Not because of the mug, but because she was so generous. And, well, maybe a little because of the mug, too, because I loved it so.

My youngest daughter, 13 years old, jokes that most of what she’s wanted to learn, she’s learned from YouTube videos.

Curious about crochet, she watched several tutorials and followed those steps to perfect the basic stitches.

Then she found a pattern, worked on it quietly in her bedroom, and one day came down to reveal her creation: 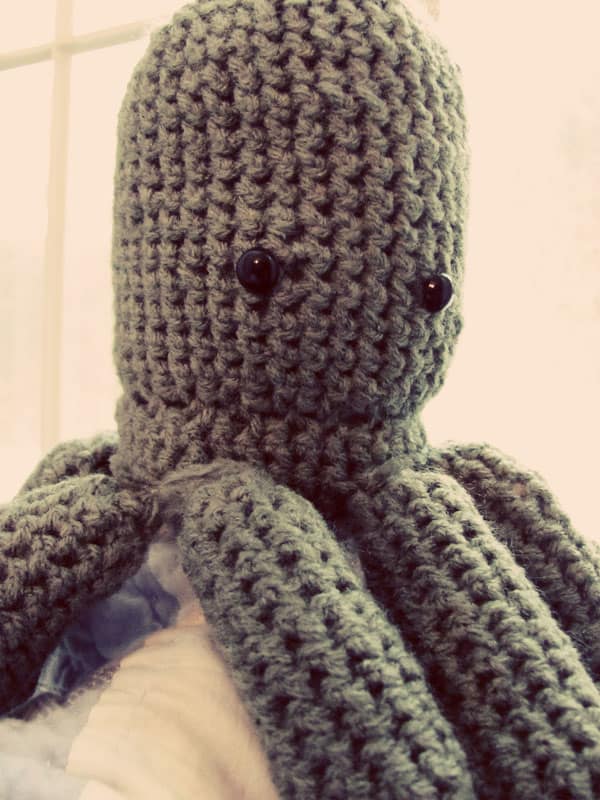 Another day, she came down to model this: 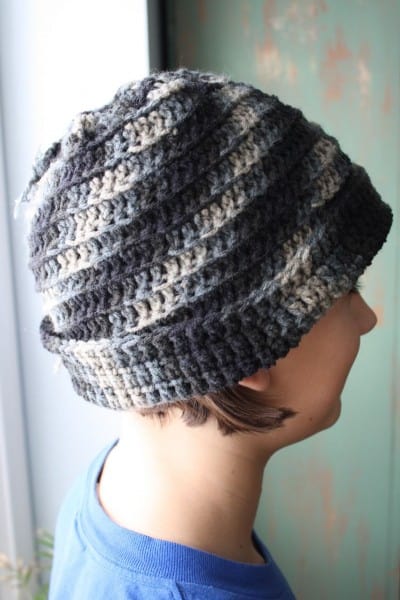 She’s looked up recipes and discovered patterns to sew things, like a doll she needed to make for history class. 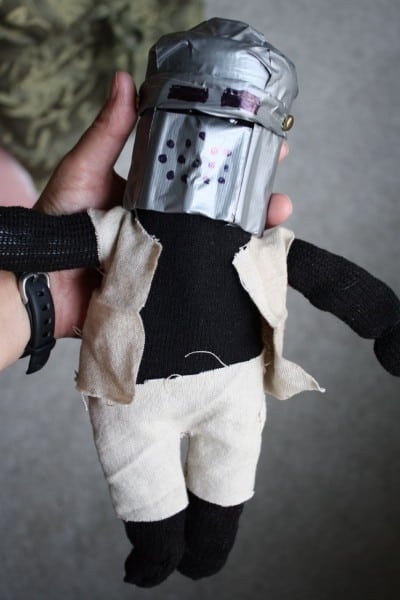 She sewed the doll from a soccer sock, and used a pattern found online to cut out clothes to be worn under a knight’s armor. She never did get around to making chainmail by bending bits of wire into circles using needle-nose pliers, but she did construct an interesting helmet from a plastic water bottle covered in duct tape. 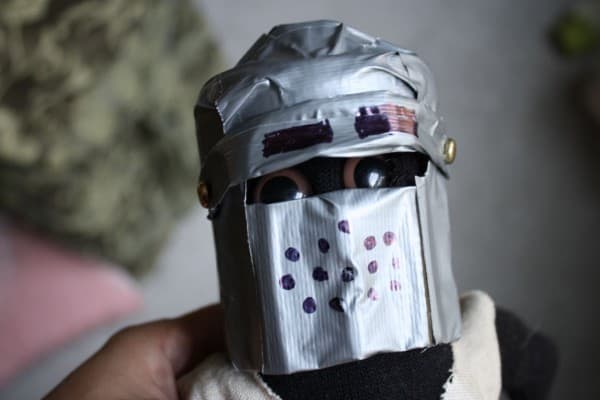 And then there was the ukulele. 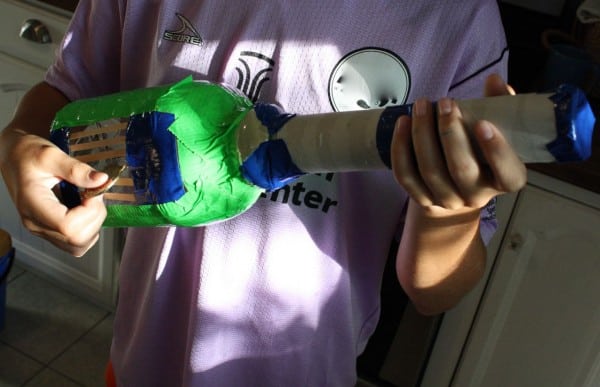 She didn’t follow a pattern for the ukulele. She just made it up as she went along, using discarded plastic jugs, rubber bands, and paper towel tubes plucked from the recycling bin. 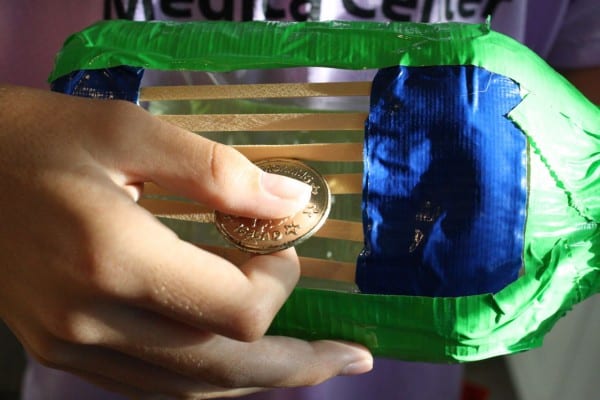 It didn’t last long, nor did it actually make music. But she had fun making it.

Too bad she didn’t find this video by a man named Colin Webb of Homegrown Guitars. His accent is lovely, and his “shoeboxulele” is amazing. If you don’t have time to listen to him describing the parts he used (scrap wood, toothpicks, and fishing wire attached to the shoebox), at least scroll to 2:37 to hear him play “Has Anybody Seen My Gal?”

Last Saturday morning, I dragged myself out of bed, pulled on running clothes, and plodded downstairs to use the “Richard Simmon’s Dreamstepper” I’d purchased used last winter. I know. Go ahead and laugh. Despite the name, it turned out to be a no-frills, functional stair-stepper that helped me get some exercise in the frigid, icy, bleak midwinter, when I wasn’t about to jog outside.

As I mentioned, Saturday morning I wasn’t in the mood to exercise, but I knew I needed to. So I grabbed some books and climbed onto the Dreamstepper and started stepping, stepping, stepping as I read. Yes, I read as I step. Anyway, about ten minutes later, I glanced at the shocks and saw liquid streaming down the metal frame.

Upon closer examination, I realized lubricant was squishing out of the shocks with each step.

I phoned the store where I bought it and asked if they had any advice. “Bring it in and let me take a look,” the technician offered. So we hauled it over there, pulled it out of the minivan and set it on the parking lot. The technician climbed on and with the first step, fluid gushed out like a lazy geyser—bloop.

“Whoa!” he exclaimed, jumping off and looking closely. He pressed down on the step and more liquid oozed out the top. “This is shot. There’s no fixing it. It has to be trashed. I can take care of that for you,” he offered.

Sure, but now what?

He offered to discount something in the store to make up for the busted Dreamstepper, so we poked around looking for another stair climbing machine of some sort. They’re usually cheap, because stair-steppers are not very trendy.

Apparently stairsteppers are so out of style, the store didn’t even have one to try.

But after a few minutes on an elliptical, I started to sense potential. An elliptical could be something on which to cross train—something to get me through the winter months. While adjusting to the fluid motion of the elliptical, I felt like I was hovering, dreamlike—almost flying, like in the bamboo forest scene from “Crouching Tiger, Hidden Dragon.”We bought it.

We rarely buy impulsively. We usually spend months researching brands and hunting for coupons or discounts. That day, though, we just did it. We plunked down our credit card and bought an elliptical machine. It’s not a high-end model; in fact, it’s rather simple, slender, and inexpensive. Still, we sort of surprised ourselves by pointing at the machine and saying, “We’ll take it.”

“Today,” I answered. “Right now, before we change our minds. Load it in the van and we’ll drive it home.”

And that afternoon my husband, with help from the girl who constructs helmets out of duct tape, assembled the machine. It’s the first piece of exercise equipment we’ve purchased new, unless you count running shoes and soccer balls.I used it this morning, thinking how fun it feels to wake up and fly.

On Facebook, my friend Lloyd Work reminded me how fun it is to write haikus by posting this:

But sometimes they don’t make sense.

So I am writing some haikus, too. Three lines: first is 5 syllables, second is 7, third is 5.

flickering candleone lone flame brightens the roomwe are not alone

Photos: Octopus image by Sophie Marie. All other images by Ann Kroeker. All rights reserved.