For the Food on Fridays carnival, any post remotely related to food is welcome—though we love to try new dishes, your post doesn’t have to be a recipe. We’re pretty relaxed over here, and stories and photos are as welcome as menus and recipes.When your Food on Fridays contribution is ready, just grab the broccoli button to paste at the top of your post. It ties us together visually.Then fill in the boxes of this linky tool to join the fun!

By the time Charity and I squeezed into seats 26E and 26F, we were hungry. We thought we had a full hour layover in Houston, but our plane arrived late and we weren’t paying attention to the time. Instead, we were hunting for an airport Wendy’s. Just as we were anticipating a satisfying meal of a burger and fries, we realized with a gasp that we only had fifteen minutes to catch our flight. We rushed to the gate burgerless.We strode down the long hallways, turned a corner and continued down more long hallways. Eventually, we saw the gate. Over the sound system, Now boarding all rows flight 1155 to Indianapolis. We made it. Just in time.On the plane, as we jammed ourselves into Continental’s economy class seats, all we could think about was food. The stewardess said they were serving complimentary drinks, but no free food. We could buy a snack, though, so Charity pulled out the airline magazine to study the selection. One of us guessed they’d charge four bucks for a bag of five M&Ms. We were close. They charged $2.99 for a 4 oz bag of Twizzlers. But while Charity leafed through the magazine, she also spied a photo of tapas. 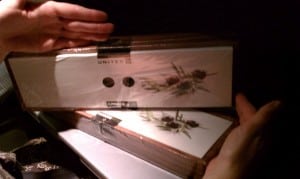 Bruschetta on crackers, boursin-style cheese spread, olives, hummus, almonds, and a little candy mint. The selection seemed classy and European, like something a first-class passenger would be served with cloth napkins and a mixed drink.Tapas.It’s all we could think about.How much would the tapas cost?Would they serve tapas on this flight?Would so many people buy tapas that none would be left for us?Afraid that they would only offer the overpriced Twizzlers on this flight, I started to manage my expectations. telling myself to stop thinking about the tapas so that I wouldn’t be disappointed if they were out.The plane took off, and when we were at cruising altitude, the stewardess wheeled a cart down the aisle. “Snacks!” she proclaimed. “Would anybody like to buy a snack?””Look!” Charity nudged me. “Sticking up on the end.””Tapas!” I exclaimed. We counted them and wondered if any would be left when she rolled past row 26. The stewardess moved slowly, calling out “snacks” like a vendor at a ball game, but no takers. Plenty of tapas on hand for us.We waved our hands excitedly. “Over here!””Snacks!” she continued, turning away from us as if she didn’t hear.Charity let out a little gasp. “We’d like tapas, please?” 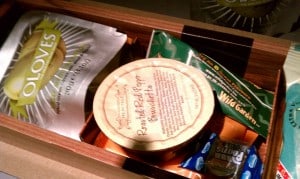 The stewardess started laughing. Good joke. Except we were starving. She was grinning big as we paid for our tapas, handing the slender packages to us as we giggled and thanked her. We could barely wait to rip off the plastic while I snapped pictures. We unpacked the little dips and spread, selecting the ideal cracker to carry the hummus and considering which would complement the cheese spread.  We crunched almonds and poked marinated olives with toothpicks. Fancy.”Look at that poor chump,” I whispered to Charity as we munched our goodies, gesturing to the guy sitting next to her. He was quietly reading a book. Unlike us, he was snackless. “He’s stuck in economy class with nothing to eat. But not us! We’re flying First Class, eating tapas.” 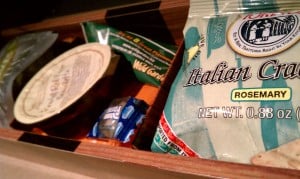 We scraped every last smear of spread from the containers and crunched every last crumb of the crackers. At the end of our feast, Charity unwrapped the mint and popped it in her mouth. Immediately, her face reacted. “Ewww!””What?””This mint. It’s not a mint. It’s licorice!””What a shock, to expect a mint and get licorice.” 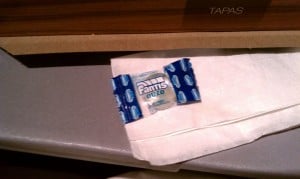 She subtly spit it into a paper napkin and tucked it into the remains of our First Class feast—a disappointing end to our moments of luxury flying. Nevertheless, we were satisfied. I even tried the licorice, just to see what it was like.We were stuck in coach, but faked First Class, just for fun. Well, we were hungry, but why not amuse ourselves—even treat ourselves—in the process? We’ll never afford First Class, but it doesn’t mean we can’t make life special in small ways. Even at home in our everyday activities and meals.Why not use cloth napkins and light candles at dinner and pretend our table is newer and classier than it is? We Kroekers do that. It’s easy to make small choices that turn a simple meal into something special.I once wrote about 10 Ways to Class Up One’s Act a Notch, everyday things that make me feel a little more civilized. Here is a selection demonstrating ways my family and I have “faked First Class” in our everyday lives:

How do you fake First Class, not just on airplanes, but every day?