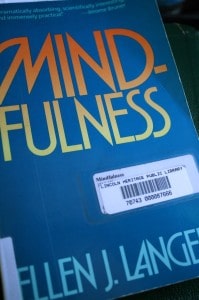 I sent my mom the link to the book club post at The High Calling this week. The book club selection is Mindfulness, by Ellen J. Langer, and this week Laura Boggess summarized the chapter on Mindful Aging.The book is packed with descriptions of studies and experiments, many designed and led by the author herself. In this chapter on aging, Langer describes dividing residents of a nursing home into an experimental and a control group. Langer and her colleagues wanted to explore the effects of offering the residents choices (or not) and responsibility (or not). The groups given greater choice and responsibility showed “clear and dramatic improvement” in areas such as how happy they felt and how alert and active the staff judged the residents to be (Langer 83).Eighteen months later, the researchers returned and took the same measures. Before the study began, the health evaluation ratings of both groups was the same; 18 months later, the experimental group’s health improved while the comparison group worsened. Also, only seven of the 47 people in the experimental group had died during the 18-month period; whereas, 13 of the 44 members of the comparison group had died (Langer 83-84).Fascinating.And horrifying.My mom replied, “I always feel sorry for the people in those control groups!”I did appreciate what Langer pointed out about our assumptions. We assume that people need us to make decisions for them because they are incapable of caring for themselves, for example, and then they believe it, too.Langer told a story in that chapter about an 80-year-old woman visiting her 84-year-old sister in the nursing home. The nursing home lady asked her sister to bring some wooden tongs, because then she could use them to pull on her underwear without bending over or asking for help. The author asked the 80-year-old woman if she brought the tongs. The woman replied, “Heavens no; if she used them she’d probably hurt her back.”Langer, appalled, suggested jokingly that perhaps they should consider inducing a semi-comatose state. “That way we could be sure she wouldn’t fall and break her hip, or choke” (Langer 87).”Well-meant protectiveness gradually undermines any autonomy,” Langer observes (Langer 87).How often does well-meant protectiveness affect other people in our life—people of all ages? Perhaps we assume teens are expected to behave a certain way or we assume that young children aren’t capable of X, Y or Z. We just buy into it without thinking. Maybe the teen who is sullen could actually interact with joy and respect but defaults to sullen because his parents continually talk about “teens and their attitudes.” Maybe the young child is perfectly capable of carrying a pitcher of orange juice to the table and filling several glasses without spilling, but never takes on that responsibility because her mom assumes she cannot.I wonder how many assumptions about all kinds of things hold us back or mess with our thinking?

I invited my son to play Bananagrams with me the other day, but he turned me down.Perhaps I’ve been taking the game too seriously? 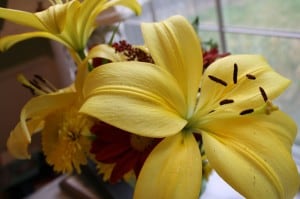 My husband bought a simple bouquet of flowers from the grocery store and positioned it on the kitchen counter for me to admire and enjoy upon my return from the Laity Lodge writers’ retreat.In it were several lilies. One was open; three were closed. Over the following days, I watched the three unfurl, petals peeling back to reveal delicate inner beauty fully visible and vulnerable.Something like that happened to me at the retreat. I had no idea how closed up I’d been until I unfurled. Risking an exposed heart—feeling delicate, vulnerable—I opened up among friends.And I realized that only with an open heart and outstretched arms am I poised to embrace. 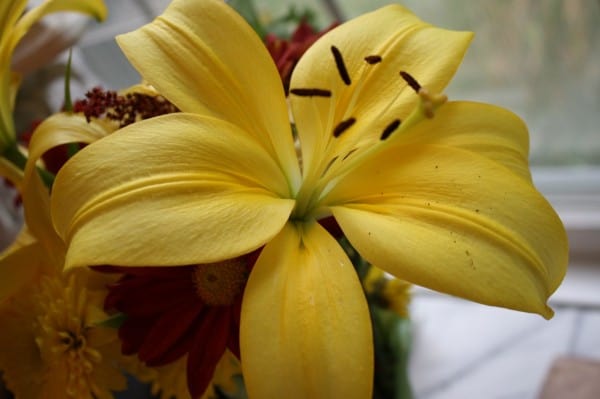 Last year, a friend and I signed up our two homeschool teens to take the PSAT at a small, private Christian school. My friend dropped them off early, and the test-takers were ushered into temporary buildings something like house trailers where they spent the morning darkening standardized-test bubbles with number two pencil lead. The setting seemed too small, too casual, to be taking this nationally recognized test.

This year, my friend and I agreed that it would be good to have our teens take the PSAT at their local public high schools—big institutions with lots of other students—instead of the dumpy house trailers. Our kids agreed, even though it meant they wouldn’t take the test together.

My eldest was a little nervous at the thought of sitting in a room with a hundred or more kids at the local high school, but recognized it would be good to experience a more typical setting. I assured her she would certainly recognize people from her soccer team and the neighborhood. The more she thought about it, the more she began to look forward to the idea of testing in a crowd.

A few days ago, I received a reminder e-mail from the high school guidance counselor:

Just a reminder that your student(s) will be taking the PSAT at the high school on Wednesday, October 12.  All of the homeschool students will test together in room 2431.

You will enter through Door #7 (cafeteria entrance), walk to back of the cafeteria and down the hallway.  Take the first stair on your left to the second floor and then go left into the math wing.  Room 2431 is in the back right corner of that wing.  There will be teachers and administrators walking around to help you get where you need to be.The students need to be in their testing room at 7:33 a.m.  They will be done with the test around 11 am and will be released at 11:17.Please let me know if you have any questions!

He was segregating the homeschooled students from the public school kids? Really?

After all that, my daughters are taking the PSAT in a smaller setting than the Christian school’s house trailers, with only two other students, both of whom are close personal friends.

The past two weeks have been good, but full, leaving little time to compose anything more than occasional posts. Thank you for visiting, even when all I have to offer are sparse summaries.