Currently in the One-Year Bible, I’m in Isaiah, and a lot of its message is difficult, even harsh. 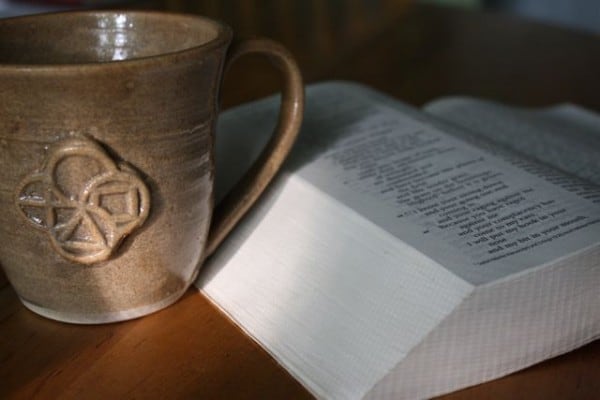 But there is hope. The reading includes Isaiah 30:15, “In returning and rest you shall be saved; in quietness and in trust shall be your strength.”

I sip coffee. In returning and rest…in quietness and trust.

Filtered morning sunlight manages to push through the clouds and brighten my mug, my Bible. The quiet will end soon. Kids will slam drawers and doors, stick bread in the toaster, flip on the radio, pour cereal, and open and shut the fridge twenty-five to thirty times.

I want to linger here, before the noise builds; I want to live a life of quiet trust, even as problems present themselves. I think of this as I set my mug on the counter and carry the Bible to my desk. I’m relocating my stuff, because the kids have arrived. Plates of buttered raisin bread and bowls of frosted shredded mini-wheat thunk against the table. Milk sloshes over the rim of a bowl. Spoons ping and clink against ceramic. The kids and I discuss the day’s schedule. We pray.

This moment of quiet and attitude of trust is temporary, because soon a disagreement will break out about whose turn it is to unload the dishwasher. But it is good while it lasts. And I think about it later, when I begin to feel agitated by scheduling challenges and an awkward conversation with a family member.

My son misplaced Bananagrams for a long time, but found it recently while searching for a green T-shirt that he’d also misplaced. The shirt was discovered inside-out and crumpled next to a chair in the corner of his bedroom. Apparently the bag of Bananagram tiles was nearby.

We’ve been playing. I actually stopped momentarily mid-game to snap this. Those of you familiar with Bananagrams knows how risky it is to interrupt one’s focus. 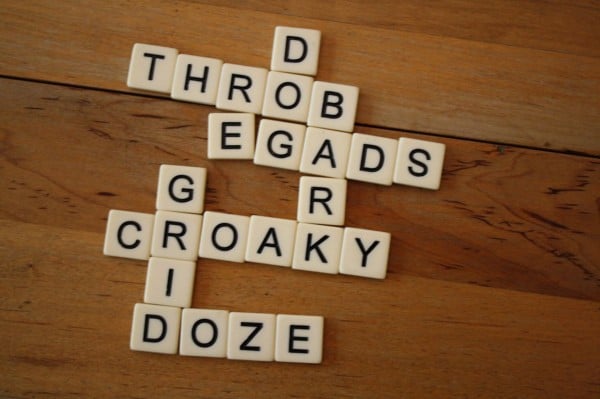 After a few more “peels,” a moment when players draw another tile, I successfully rearranged and repositioned letters to form new words, but a late acquisition tripped me up: “J.” Given a little more time, I could have juggled things and made it fit, but one of my daughters was too fast. She used up all of her tiles.

No more to draw from. Game over. 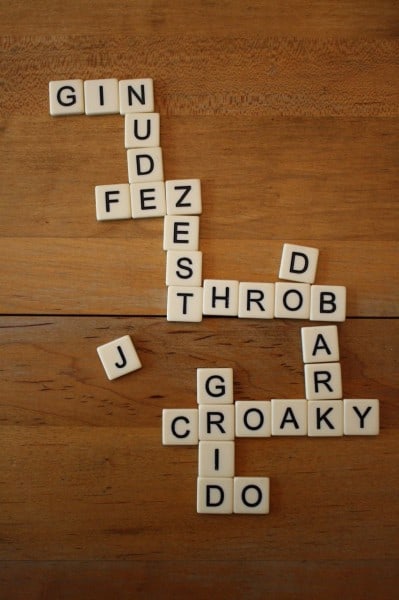 One of my daughters is in a government class. She’s about to study how a bill becomes a law, which will be fully explained in her textbook; but I’m thinking, What better explanation than this?

This more serious resource is helpful for quizzing how well a student (or adult) understands the Constitution. 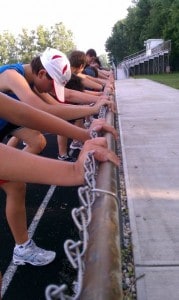 Two weekends ago, our cross country team ran in a well-organized invitational held at a community park. The course wove through some woods and down a little rolling hill and around a soccer field. One section was kind of confusing because the runners had to circle around a section twice, but the organizers sent parents from each team to direct athletes. In addition, a man on a bicycle rode in front of the lead runner to show the way.

No one got lost.

Last weekend, the team participated in another invitational. Start time was delayed so that by the time everyone gathered, the host wasn’t willing to take teams on a course tour. He started pointing. “Oh, it’s so simple,” he said. “You just go around that tree over there, loop around there two times, then the third time you go around there and run down that way around the playground and come back up this way and go down that way…” and so on. He concluded, “It’s easy. So easy. We don’t need to do a tour. It’s clearly marked—just follow the arrows.”

No cyclist led the way. No parents directed the runners to loop around the playground two times or pointed them through the woods. The starter shot the gun, and the runners were off, on their own, following the arrows best they could.

They got off course.

They lost their way.

It was heartbreaking to witness their long strides and the determination on their faces, only to realize that something was “off”; their times couldn’t possibly be as fast as those I was clocking.

It turned out that in spite of their hard work, their strong performance, their grit and excitement, most were disqualified. If you don’t run the course, your time doesn’t count.

How do I know, in life, if I’m on the right course? How do we avoid racing off in the wrong direction?

I think of Isaiah again, same passage as earlier:

Better than a bicycle leading the way—a voice from behind saying, “This is the way, walk in it.”

All photos copyright 2011 by Ann Kroeker.