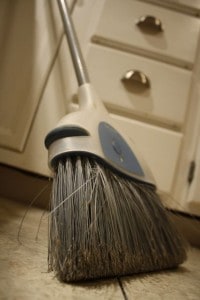 My son offered to sweep the kitchen floor. Though tall enough to hold a full-sized broom normally, he instead gripped it as if he were planning to whack a mouse and then slid the bristles across the vinyl tiles, managing to collect a few dog hairs and bread crumbs with each slow, inefficient motion.

While wiping the counters, I watched him, debating whether or not to say something. Should I recommend a better way?

My mind flashed to a summer day at the farm house where I grew up. After Dad and my brother finished mowing near the house, my job was to sweep the grass clippings from the back porch, a concrete slab about four by six feet.

I grabbed the straw broom from behind the door and started sweeping. I probably wasn’t working very quickly; I was likely daydreaming. I might have been gripping the broom awkwardly, sliding it across the concrete in wide, inefficient motions.

Suddenly, a shout. “Not like that!” Dad yanked the broom out of my hand. “You’re doing it all wrong! My mother taught me the right way. You have to make quick, short movements like this!”

He handed me the broom. While he watched, critiquing, I had to practice it his way—or, rather, his mother’s way—adjusting my motions until I achieved the perfect flick. Finally satisfied, he returned to the mower. I  flicked the broom a few more times for effect, then ran inside and shoved it behind the door.

The grass was gone; so was my self-esteem.

Watching my son in the kitchen as he managed to corral the crumbs, I decided to keep quiet. Perhaps in the years to come he’ll watch others at work and learn to adjust his hold on the handle; or maybe he’ll figure out how to sweep quickly and thoroughly by experimenting on his own.

But for now, he was collecting most of the dirt. Wasn’t that the goal?

Anyway, who was I to criticize? After wiping the counters, I left streaks.

Related reading at The High Calling: “Do the Job Your Way” by L.L. Barkat.Photo by Ann Kroeker, copyright 2011.