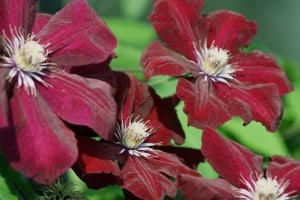 I remember curling up in a nook on a bean bag or something equally squishy, something I sank into, in my elementary school library. I pulled out Horton Hears a Who, And To Think That I Saw It on Mulberry Street, and The 500 Hats of Bartholomew Cubbins. Although I was capable of reading more challenging books, I chose those because I could take them in quickly, one after the other, while curled up in that nook, amused, delighted—enchanted—by Seuss’s inimitable rhyme and fanciful artwork.

One summer morning I was walking with Mom to a day camp she had signed me up for, where I played Red Rover for the first time ever and the leaders handed us magnifying lenses and told us to watch the insects and plants in a four-by-four-inch patch of grass that was ours alone to watch. I stared closely, choosing to be interested in a fat black carpenter ant that passed through my shady, mossy spot along the fence.

While I was walking to the camp along the uneven sidewalk, I noticed reddish-purple stains on the concrete slabs and asked Mom what caused them.

I thought of Dr. Seuss. “Mulberries?” I didn’t believe they were real.

“Yes.” She pointed to the tree where much of the fruit still drooped. “See?”

I saw. Amazed that mulberries actually existed and even more amazed to be told, furthermore, that they were edible, I tried one. I don’t remember what I thought of the taste; only that it stained my finger and thumb, and that I ate a mulberry the same day I realized they existed. For the entire week that I walked along that stretch of sidewalk to the day camp, I would remark, “And to think that I saw it on Mulberry Street,” though I don’t know if I repeated it in my head or out loud. 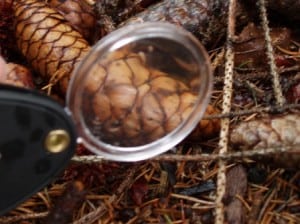 I was drawn by the simplest things—sucked in by a magnifying glass, a mulberry, or even the mental feast I knew as the library. Our family frequented a normal-sized library in the town where we used to live, where my mom worked even after we moved to the farm. But the closest library to our farm was in the same tiny town where I walked along the sidewalk to that day camp.

That library was in a building that seemed no bigger than a suburban storage barn. Navigating the tall, tight stacks felt something like slipping through a mouse maze built for a science fair project, but I found a little room, another nook, lined with Nancy Drew mysteries.

I’d curl up in there, in that building smelling of musty books and dusty shelves, and read most of a Nancy Drew or Hardy Boys mystery before my mom came back from the laundromat or the hair dresser, ready to go. I’d check out an armful of books, churning through pages on the five-minute drive home, devouring stories, enchanted.

Before long, I realized I could do more than read for amusement; I could get answers to my questions at the library. The resources were right there at my fingertips—literally, via the stiff cards lining wooden drawers of the card catalog.

I checked out book after book from the Foxfire series after reading My Side of the Mountain and pored over instructions for creating indoor habitats to raise and study tadpoles or crickets. I checked out books on making soup and baking homemade bread when I went through a vegetarian phase after reading Diet for a Small Planet.

I read books on writing, too. These I shoved deep into my bag, not wanting to draw attention to my interest in self expression. My parents were journalists; my brother, though still a student, was clearly a gifted creative writer. My family never considered me a writer and instead dubbed me the athlete of the family. So I ran track and played softball, secretly lugging home books on writing and completing the exercises on lined paper up in my bedroom, scribbling descriptive paragraphs or snippets of poetry, only to blush at my clumsy efforts and quickly toss them into the trash.

I wanted to enchant others the same way I’d been enchanted.

A library nook and a pile of Dr. Seuss; a magnifying glass and a patch of grass under the shade of a mulberry tree; nonfiction books cataloged using the Dewey Decimal system.

Who knows what can draw someone in?

Who can predict what will enchant?