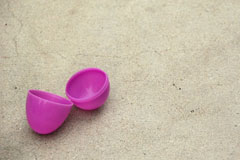 On Easter morning one year, we arranged for our son to open the last plastic egg, but he refused.Several years ago, we bought a pack of twelve plastic “Resurrection Eggs” filled with various symbols representing key moments in the Easter story. We worried the eggs could be a little cheesy, but our kids delighted in taking turns plucking one from the carton and shaking it like a birthday present to guess what was inside.

Each item makes a different sound as it rolls or thumps against the plastic: for example the whip—nothing more than a strip of leather—can be hard to guess as it softly brushes against the insides like a whisper, whereas we can easily identify the metallic chinka-chink of the noisy coins…

Credits: Image by Jeff Carlson. Used with permission via Flickr.