Here at the Food on Fridays carnival, any post remotely related to food is welcome—though we love to try new dishes, your post doesn’t have to be a recipe.If you want, you could simply tell us the most unusual dish you’ve ever eaten. Or the worst meal you’ve ever served.My point is that we’re pretty relaxed over here, and posts like that are as welcome as menus and recipes.When your Food on Fridays contribution is ready, just grab the broccoli button (the big one above or smaller option at the bottom) to paste at the top of your post. It ties us together visually.Then fill in the boxes of Simply Linked to join the fun!

My husband and I regularly eat at a nearby Indian restaurant, often to satisfy our craving for chicken tikka masala and palak paneer. The flavors are new to us—neither of us grew up eating Indian food—but boy have we taken to them!Now that I’ve discovered my husband’s openness to new cuisine, I asked if he would take me to a tiny Thai restaurant tucked into the corner of a strip mall. I was feeling adventurous after reading an article in the New York Times entitled, “In Indianapolis, the World Comes to Eat.”

Indianapolis was once known as the 100 Percent American City. But its outlying neighborhoods aren’t what they used to be. Neither are the suburbs of most metropolitan areas in the United States. Areas long defined by racial and ethnic homogeneity created by white flight from urban cores have become nodes of ethnicity populated by relatively recent arrivals…As these immigration patterns transform neighborhoods outside urban centers, they are also changing what, and with whom, suburbanites eat.

Ours is that changing world. We’re the suburbanites changing what and with whom we eat. Where we once might have defaulted to Applebee’s, we are now just as likely to head out for Indian or Mexican food. So I wasn’t surprised when my husband agreed to the Thai restaurant. 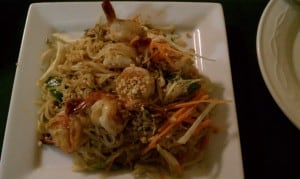 The eating area was tight—bigger than my bedroom, but not by much—filled with budget tables and secondhand artwork. An online review said the owners were a husband and wife team that did it all, and sure enough—we were met at the door by a tiny lady who welcomed us with a bow. After seating us, bringing us menus (with another bow), she memorized our order and repeated it to an enthusiastic man who disappeared into the kitchen to prepare it. They seemed to be the only staff.I ordered “Pad Rad Nar” with shrimp. The serving was small, but the taste was big. I practically licked the plate. We’ll be back.Now that we have a favorite Indian and Thai restaurant, I think it’s time to branch out even more. The article in the Times mentioned Pakistani, Ethiopian, Burmese, Venezuelan, Cuban and Peruvian restaurants we might visit sometime.Where should we go next? We could spin the globe and see where it stops—chances are we’ll find a restaurant somewhere in town serving food from that country. Or we could select them systematically, using alphabetical order or a continent-by-continent approach.How would you choose?