Curiosity Journal: a weekly recap of what I’ve been reading, playing and learning; what I’m reacting to and writing. Inspired by Monica of Paper Bridges, I’m occasionally recording a Curiosity Journal. Tag words are: reading, playing, learning, reacting…and writing.Reading: I just finished Eat, Pray, Love, and now I’m craving pasta. While I wouldn’t recommend this book from a moral (crass humor and sexual promiscuity) or spiritual perspective (this blogger describes Gilbert’s theology as “far afield”), I found myself wishing I could stitch together similes as memorable as hers:

I approached a tiny vegetable stall with one Italian woman and her son selling a choice assortment of their produce—such as rich, almost algae-green leaves of spinach, tomatoes so red and bloody they looked like cow’s organs, and champagne-colored grapes with skins as tight as a show-girl’s leotard. (Gilbert 122)

I’ve never seen a show-girl’s leotard, yet I can see those grapes.

And my Italian—which has been getting better, honestly—fails me in such stressful circumstances. As I try to speak logically about my missing box of books, the woman looks at me like I’m blowing spit bubbles. (Gilbert 147)

[This teenage Indian boy] dressed the way the computer-interested boys in my junior high school used to dress for band concerts—dark trousers and an ironed white button-down shirt that was far too big for him, his thin, stemlike neck sticking out of the opening like a single daisy popping out of a giant flowerpot. (Gilbert 242)

The computer-interested junior high band kids and the single daisy popping out of a flowerpot. Yes, yes! I see it, Elizabeth! Such great description. Makes me want to toss similes into every paragraph like a young cook discovering how effective an ingredient like garlic or nutmeg is in a particular dish will begin tossing it into every recipe. Will it improve the flavor? Maybe. Maybe not. But to experiment is to learn. Playing: Monday night I played Scrabble with my husband and two of the kids. I won. Afterward I thought maybe I should have let one of the kids have it or even my husband, who grew up in Francophone Belgium speaking conversational English (read: limited vocabulary) only with his family. For him to win at Scrabble would be momentous. 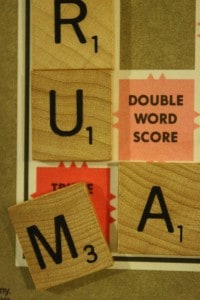 But when I could saw a chance to make “F-O-R-U-M” end on a triple word square, I couldn’t resist. We were down to the last few tiles when I scored big. No one could catch me.After we packed up Scrabble, someone pulled out Scrabble Flash, an electronic word-scramble speed game. Our middle daughter won. The Belgian-born guy for whom English is technically his second language came in second. I was honestly trying, but lost.Learning: Gilbert passes along some fascinating historical tidbits in Eat, Pray, Love. One that particularly intrigued me was her explanation of how the Italian language came to be.Europe, she said, was “once a pandemonium of numberless Latin derived dialects that gradually, over the centuries, morphed into a few separate languages—French, Portuguese, Spanish, Italian. What happened in France, Portugal, and Spain was organic…The strongest city ultimately determined the language of the whole country.”Italy, however, wasn’t a country; rather, it was “a peninsula of warring city-states dominated by princes or powers.” Local dialects abounded so much that “[a] scientist in Florence could barely communicate with a poet in Sicily or a merchant in Venice.”In the 1500s, Gilbert explains, some Italian intellectuals decided Italian would be the dialect they deemed most beautiful. The winner: that of the poet Dante. To write Divine Comedy, Dante had picked up the vernacular of Florence and shaped it as he worked. “The Italian we speak today,” Gilbert concluded, “is not Roman or Venetian, nor even really entirely Florentine. Essentially it is Dantean. No other European language has had such pedigree.” (excerpts from pages 84-88)Reacting: Gilbert’s book has me thinking how important it is to analyze and grasp an author’s (or, in fiction, a character’s) world view/theology/philosophy of life; however, I don’t know that I could summarize Gilbert’s, as she often has another character in her book voice statements of belief (leaving me unsure whether she believes it herself). Writing: People have asked me what I’m working on these days. One book concept keeps jumping in front of me, waving energetically. “Hey, Ann! How about me? I’m full of possibility!” But I can’t seem to get this feisty idea to sit still long enough to figure out the best expression were the idea to take form. A solid proposal is needed that would describe this book’s content and approach, but just when I get to thinking it through, the idea skips away after announcing itself, like a street urchin scrambling down an alley and out of reach.Until I solidify any book plans, I’ll write simile-smeared blog posts much as a Kindergarten kid who has discovered that blue and yellow swirled together make green proceeds to coat her paper with experimental blobs and streaks.There you have it. A Curiosity Journal that reveals what I’m reading, playing, learning, reacting to and writing.