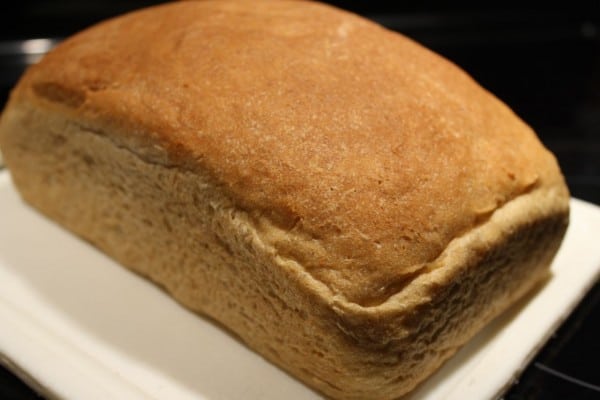 “Is it this simple, then, assemble these few everyday materials from my cupboards and I will create perfection?” (Fields 247).

Leslie Leyland Fields writes about making the perfect loaf of bread in the essay she contributed to The Spirit of Food. She’s made bread for years, but this time she is attempting a different method that requires only a few kitchen items (mixing bowls, a pot with a lid, wooden spoon, plastic wrap, dish towels) and no kneading. From that: perfection.

We love bread; so I read on.

She reflects on previous attempts to bake bread, never quite attaining the texture and taste that she envisions. So she dives into this recipe that many cooks have adopted in place of their traditional bread-making methods.

I follow along, wondering how the story will turn out—how the bread will turn out—and I think of my own bread-journey. I recall the thick, dense, brick-like whole-wheat bread I made in high school by following instructions that I found in a library book. That imperfect bread was redeemed, made palatable by toasting slices and slathering them with butter or generous smears of strawberry jam.

When I was newly married, bread machines were all the rage. We couldn’t afford one right away, but eventually I found one at a reasonable price and made many loaves using recipes from the cookbook that came with the machine.

Then we abandoned the machine for a while, too lazy or too consumed by parenting to mess with it. The machine sat in the basement, collecting dust. We almost donated it to Goodwill, but I hung onto it. Later I found inspiration when I decided to use the machine to make the dough, which I could transfer to a traditional bread pan for the final rise and baking. 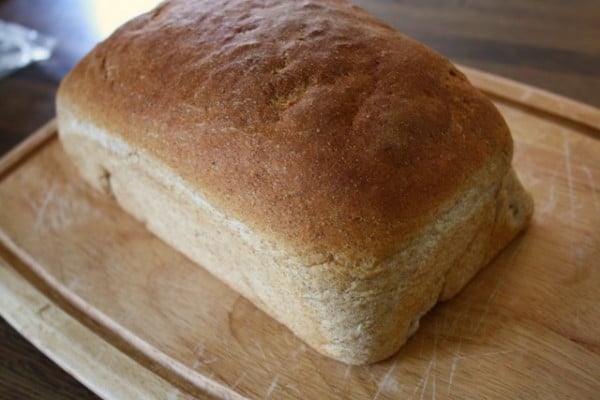 For this new approach, I searched for the perfect loaf of bread and came up with this one, Whole Wheat Honey Bread, which has become our standard family loaf. I’ve taken to tossing in oatmeal sometimes, for variety, or I’ll use white-whole-wheat flour. It’s rarely perfect: sometimes it turns out flat and small; other times I undercook it a little and it’s gooey inside. But we eat it, even if we have to redeem it slice by slice in the toaster. It fills us.

I call it homemade bread, but is it? The machine mixes the dough, creates the right heat so it can rise, thumps it down and lets it rise again. All I do is measure the ingredients and drop or pour them in, one after the other. When the machine beeps, I pull out the dough and drop it unceremoniously and unartistically into an oiled bread pan. I smoosh it around a bit, forming it into a loaf-like shape. Let it rise. Heat the oven. Stick it in. Set the timer for 30-40 minutes. Pull it out and tilt the pan so the loaf slips out and onto the cooling rack. How much of the work can I claim?

But she looks around the table and realizes how everyone lingers, joking, laughing.

I look around this table now, the stroganoff and salads soon gone, the breadbasket already empty, and still we sit. I know we will need to eat again, all of us, that nothing I can make or buy will cure the body’s wants for long, but look how filled we are! It is not my making that fills us. (Fields 255)

It is not my making that fills us.

That sticks with me. I realize how little I have to do with the bread when a machine on my counter does 98 percent of the work. Most of the time I dip from bags of flour I’ve bought from Trader Joe’s or Kroger, but even when I buy wheat berries from Whole Foods and grind it into flour, I didn’t plant the seeds and watch stalks of wheat rise toward the sky in fields outside my window. I didn’t pray for rain or see how the sun warmed it. I didn’t harvest, thresh or winnow it. I borrow from the work of others to pull it together.

[T]he work of my hands is undone without the sun on the wheat, the ones I love who come to eat, the one who fed us his body, his life…Even the Maker of the world did not make the bread he broke that final night…He laid his hands on someone else’s bread, blessed it, and claimed it—this is my body—and passed it to waiting hands, to every hungry soul. And it was done. (Fields 255)

Bread isn’t what brings my family to the table and causes them to linger; it is not my making that fills us.

One time after dinner, as the candles flickered in the dark, I asked my kids what they felt was different about our family. They had been enjoying sleepovers with friends, so they’d joined other families for several meals, including dinners and breakfasts.

“No, not the candles,” she said, then checked herself. “Well, yes, the candles are unusual, too, but it’s this. This sitting around after the meal and talking like this. Other families don’t do this.”

“What do they do instead?” I asked.

“They get up when they’re done and leave the table,” she said.

Another child offered, “Sometimes they don’t even sit down together.”

“Sometimes we don’t, either,” I pointed out.

“But we’re together more than we’re not,” she said.

We talked about a few other things, then we prayed. The kids cleared the table and argued about who would blow out the candles. I sat, thinking.

This. This fills us, this sitting around and chatting during and after dinner. This fills us more than the pasta and carrots, more than French toast and maple syrup, more than slices of warm bread from the oven slathered with butter.

This sitting around the table, lingering, listening, questioning, opening up of lives, praying…this fills us.

Source: Fields, Leslie Leyland (ed.). The Spirit of Food: 34 Writers on Feasting and Fasting Toward God. Eugene, OR: Cascade Books, 2010.