Curiosity Journal: a weekly recap of what I’ve been reading, playing and learning; what I’m reacting to and writing. Inspired by Monica of Paper Bridges, I’m occasionally recording a Curiosity Journal. Tag words are: reading, playing, learning, reacting…and writing.Reading: One Thousand Gifts by Ann VoskampJust about done reading Ann V’s book. The world is a richer place for having her in it, inspiring us to the practice of Eucharisteo.Playing: Other than having coffee with a friend this afternoon, this has not been the most playful week or so, as I’m processing a few disappointments and focusing on some deadlines. Glad to have Ann V. reminding me to be thankful in and for all things.Learning: I found this article at NYTimes online to be a fascinating look at how to memorize. He explains an ancient Greek poet’s discovery in the fifth century B.C.:

After a tragic banquet-hall collapse, of which he was the sole survivor, Simonides was asked to give an account of who was buried in the debris. When the poet closed his eyes and reconstructed the crumbled building in his imagination, he had an extraordinary realization: he remembered where each of the guests at the ill-fated dinner had been sitting. Even though he made no conscious effort to memorize the layout of the room, it nonetheless left a durable impression. From that simple observation, Simonides reportedly invented a technique that would form the basis of what came to be known as the art of memory. He realized that if there hadn’t been guests sitting at a banquet table but, say, every great Greek dramatist seated in order of birth — or each of the words of one of his poems or every item he needed to accomplish that day — he would have remembered that instead. He reasoned that just about anything could be imprinted upon our memories, and kept in good order, simply by constructing a building in the imagination and filling it with imagery of what needed to be recalled. This imagined edifice could then be walked through at any time in the future. Such a building would later come to be called a memory palace. 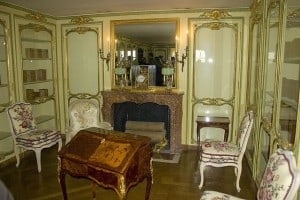 A memory palace! That’s what I need—an imaginary palace in which I can store the treasures of Scripture or the names of people I meet. But…a palace? I don’t know the layout of any palaces to use for my memory work.Not to worry! The author clarifies that these so-called “memory palaces” don’t need to be palatial; in fact, they don’t even need to be buildings. “They can be routes through a town or signs of the zodiac or even mythical creatures,” he says. “They can be big or small, indoors or outdoors, real or imaginary, so long as they are intimately familiar.”It could be, therefore, a building such as my childhood or current home, or a path such as my standard running route. I suppose it could even be the layout of my favorite grocery store.In that “palace,” I would paint scenes within its rooms and along its hallways, each scene “so unlike any other it cannot be forgotten.” I personally don’t have the goal to memorize material quickly, like the author did, but I would like to do it accurately. The author stated that many competitive “mnemonists” who enter speed memory contests claim that “their skills are less a feat of memory than of creativity.”He explains:

[O]ne of the most popular techniques used to memorize playing cards involves associating every card with an image of a celebrity performing some sort of a ludicrous — and therefore memorable — action on a mundane object. When it comes time to remember the order of a series of cards, those memorized images are shuffled and recombined to form new and unforgettable scenes in the mind’s eye. Using this technique, Ed Cooke showed me how an entire deck can be quickly transformed into a comically surreal, and unforgettable, memory palace.

The author is a bit crass in developing memorable images to help him make connections, but he practiced a lot and became a memory champion. I wonder if I could employ the basic ideas—without the crudeness—to improve my ability to memorize Scripture or names?Reacting: Gas prices may be soaring to $4/gallon in the months ahead. This has me thinking about our weekly schedule and driving habits, wondering if we should plan ahead and simplify in any way.Also, another study exploring the health effects of low-level radiation emitted from cell phones is “among the first and largest to document that the weak radio-frequency signals from cellphones have the potential to alter brain activity.” I recall the conversation I had  yesterday with a friend, chatting by cell phone. I had that gadget pressed against my head for half an hour or more. New resolve: locate my earpiece and use it!Writing: I’ve been working on four messages for a women’s retreat (March 4-6). It’s such a different process, writing something to be delivered by voice instead of the page or screen; but I’m looking forward to a weekend with a lovely group of ladies!There you have it. A Curiosity Journal that reveals what I’m reading, playing, learning, reacting to and writing.