Here at the Food on Fridays carnival, any post remotely related to food is welcome—though we love to try new dishes, your post doesn’t have to be a recipe.If you want, you could describe what you eat to stay fortified during these dreary February days. Basically we’re pretty relaxed over here. Posts that tell stories involving food are as welcome as menus and recipes.When your Food on Fridays contribution is ready, just grab the broccoli button (the big one above or smaller option at the bottom) to paste at the top of your post. It ties us together visually.Then link to Simply Linked. 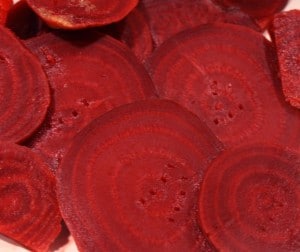 During our book club discussions at TheHighCalling.org one week, we got to talking about beets. Laity Lodge’s Executive Chef Tim Blanks provided a recipe in the post itself with this introduction:

I think beets are the most underrated of all vegetables. Perhaps this is due to the tins of sliced beets, saturated with vinegar, which we were subjected to as children, Try this method of baking them whole in their skins and discover a whole new vegetable.

In the comments, Glynn Young suggested the only palatable way to eat beets is in borscht, their flavor masked by other ingredients. Clearly, Glynn is not a fan.Unlike Glynn, Denise Frame Harlan took Tim’s lead and promoted beets, recommending this method of preparation:

Bake the beets wrapped in foil. When they cool, push the peels off, slice and simmer in orange juice, with a few cloves in the sauce. When the beets are very soft… it will change the way you think about beets! Wish I had some right now.I would only eat my mother’s pickled beets as a child, laced with loads of sugar. The orange-beets are so much better.

You can also bake beets Denise’s way, chill them, slice them thin, and serve them on a bed of baby lettuce with thin orange slices, little gobs of goat cheese, and a sprinkling of sliced almonds. You don’t need much more than a little olive oil, maybe with a drop or two of sesame oil in it, as a dressing. 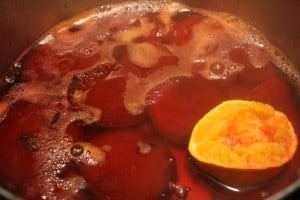 LaVonne had me with “little gobs of goat cheese.”I’m in. Bring on the beets.When I signed up for a CSA, I actually said “bring on the beets,” and they did. They said, “We’ve got the beet.”I’m just kidding. The CSA stuff was handled electronically. But I did click on the form in their system, adjusting my order to request beets in my first delivery.When my box arrived this week, I pulled out three unwashed beets with their long stems and leaves still attached. I was faced with a dilemma: How to prepare them. Tim’s way? Denise’s? LaVonne’s? Or should I heed Glynn’s warning and hide ’em in borscht? I even considered “Olga’s Fasting Salad,” a recipe included offered by Amy Frykholm at the end of her essay “Fasting Toward Home.”Finally I decided to try Denise’s method (I’ll include LaVonne’s instructions in the standardized recipe below), wrapping the beets in foil to bake, and then simmering them sliced on the stove in orange juice and cloves.Beets, I quickly learned, are red.Of course, I already knew they were red, but I didn’t realize how red until I was working with them. They ooze blood. 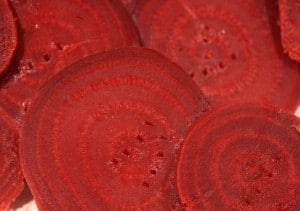 Directions: Bake the beets wrapped in foil (wrap well, for they will ooze red). When they cool, push the peels off (I used a fork to hold the beet and a knife to slide off the peel because they were staining my fingers fire-engine red), slice and simmer in orange juice, with a few cloves in the sauce until the beets are very soft. Salt to taste and serve warm and/or chill them, slice them thin, and serve them on a bed of baby lettuce with thin orange slices, little gobs of goat cheese, and a sprinkling of sliced almonds. Dressing: a little olive oil with a drop or two of sesame oil in it.Each writer featured in The Spirit of Food submitted a recipe that is included with his or her essay. Kay of The Church Cook is working her way through the recipes. So far she’s prepared everything up to Nancy Nordenson’s Swedish pancakes with lingonberries, so we’ll have to be patient; she hasn’t yet made it to “Olga’s Beet Salad.”